Kindertransport‘s nine year old German – Jewish child Eva asks her mother Helga “What’s an abyss, Mutti?” The mother answers “An abyss is a deep and terrible chasm.” Eva’s eager questions continue: “ What is a chasm?” The mother says that a chasm is a huge gash in the rocks. This sense of ‘split’ deeply informs Diane Samuels’ wonderfully moving and revealing play, Kindertransport, now playing at Nottingham Playhouse until 20th October. A split personality cries out into the void and asks herself the eternal question, natural to humanity, ‘Who Am I?’ And the answer is so terrifying for her that she refuses to face it. Not only are personal secrets hidden from others but also hidden from the self with the risk of one’s offspring inheriting the same genetic and damaging psychological states of perpetual angst. 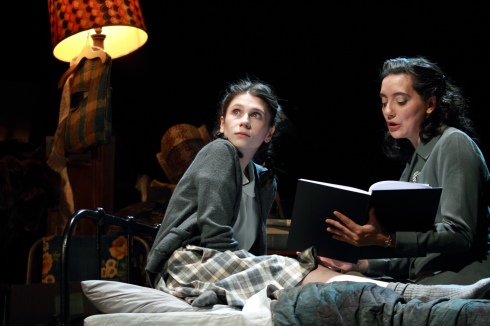 The selective hidden memories of parental betrayal/rejection and lost innocence echo throughout the whole of Kindertransport. They help us realise the value of what is remembered and how memories form one as a human being; how memories from childhood sit very differently in the mind than those of oneself as an adult. As American novelist James Baldwin said: ‘People are trapped in history and history is trapped in them’. In Diane Samuels’ memory play Kindertransport we encounter memory shaped by trauma in dark foreboding places where history clashes with story head on. 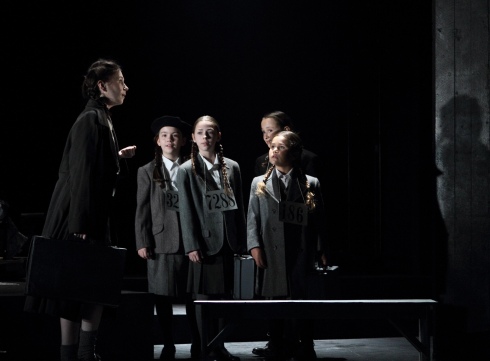 And what a story it is. The play was born out of the reality of the Kindertransport, (the transportation of Jewish children to safety) a life saving scheme, organised in 1938/39 after the German Jews lost their citizenship and livelihoods discourtesy of the National Socialists State. From the real life world changing events of Kristellnacht (9-10 November 1938), the burning of synagogues, prison camp imprisonments, exterminations, state sanctioned violence and pogroms we meet the fictional Eva Schlesinger as her parents make the concerned and difficult decision to send her to safety in England. 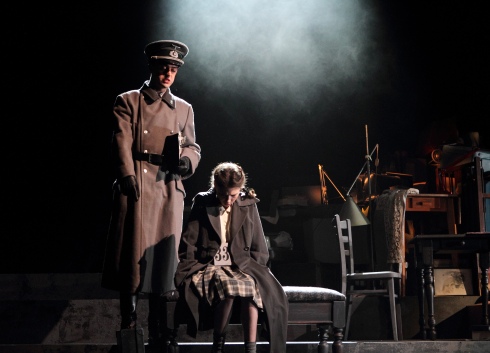 Key to the story, is the fact that Eva has no opportunity of choice to remain with the family in Germany and she makes the traumatic journey alone, albeit with other Kinder refugees. In her later life this leads to her refusal to acknowledge her Germanic – Jewish upbringing. There is, however, a promise made by her Mutti and Vati that they will follow on and be together as a family on safer shores. 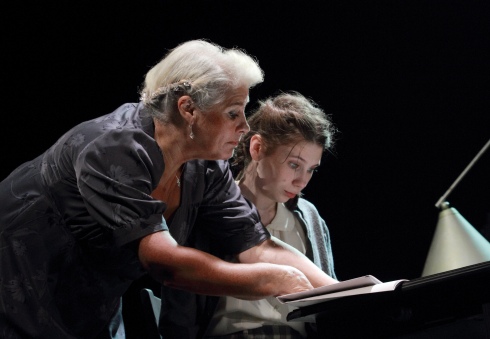 This is a story of survival, gratitude and loss and exists at a time when many countries were barring their doors to refugees no matter how endangered they were. Sadly we still see echoes of that actuality and mentality in our contemporary world. In 1930s/40s Nazi Germany the Jewish people were not even seen as human beings. 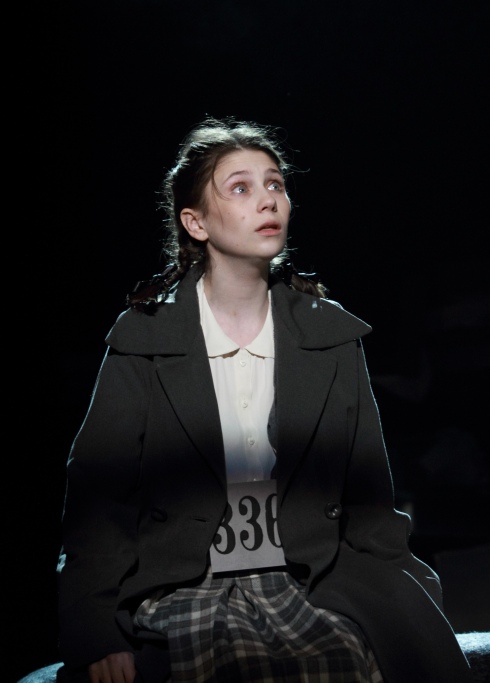 This beautifully haunting and hope filled play takes place in two time periods. Namely the late 1930s/early 1940s and closer to the present day – the 1980s. The Nottingham Playhouse production, sensitively and strikingly directed by Fiona Buffini centres the action in and around a hugely imposing dusty treasure trove of a suburban attic created by set designer Madeleine Girling. The unseen house below is owned by an English woman called Evelyn (Cate Hamer). Evelyn’s daughter Faith (Elena Breschi) is about to leave home for university studies and the mother is helping her to select various kitchen items from the boxes.  Granny Lil (Denise Black) calls round to assist and is the unwitting agent of a seismic change in the family history.

Meanwhile, across time, Eva’s mother Helga (Rebecca D’ Souza) is preparing her daughter to leave Hamburg alone on a frightening journey across Europe and over the sea to England during politically very unstable times. Fear is constantly in the air and is manifest in the male forms of authority and officialdom and the terrifying fantasy figure of Der Rattenfänger – the Ratcatcher that could well be seen as the unsaid force of Nazism. All the males are played by Patrick Osborne who changes character like a shape shifter – sometimes likeable – sometimes dangerous and horrific. To Eva, even people who do not have much power, like Osborne’s Postman can potentially have a lot of malignant power and impose a threat to her unstable existence. 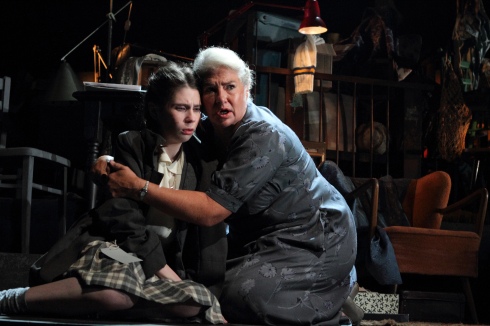 The entire cast performances in Nottingham Playhouse’s Kindertransport are rock solid acting and all show high degrees of understanding of the subject and in particular Jenny Walser who plays a bilingual (English and German languages) Eva Schlesinger. Her vulnerable performance is heart meltingly touching. Walser uses the stage beautifully and shows us the frightened and yet spirited young girl that has been transported to England with virtually nothing and barely a word of English in her vocabulary. She is nothing short of brilliant in the role of Eva.

Denise Black as Lil is totally convincing as the surrogate – firm but loving – English mother figure to refugee Eva and ably demonstrates her age and attitude differences in the time zones as she slips between the 1940s and the 1980s. Rebecca D’Souza’s Helga is both cautiously optimistic in the survival of her family through her difficult decisions and deeds and yet haunting and unforgivable in the outcomes. 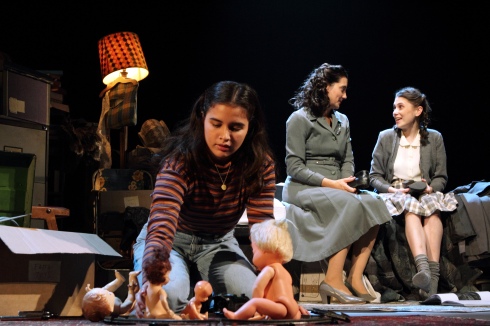 Playwright David Mamet is quoted as saying ‘All drama is about lies. All drama is about something that’s hidden. It starts because a situation is unbalanced by a lie… At the end of the play the lie is revealed. The better a play is, the more surprising and inevitable the end is.’ Kindertransport is one of those better plays. In the mother-daughter characters and the humours and dilemmas of their relationships we find much to recognise in ourselves and our families. A keen sense of ‘no spoilers’ restricts this reviewer from revealing more!

A frozen inner life is what we discover in the uptight character of Evelyn and Cate Hamer delivers a wonderful performance as a deeply hurt woman hiding a terrible secret born out of guilt and anger. As her daughter Faith, Elena Breschi can be seen as a modern day mirror image of Eva in her curiosity for life and a need to cling on to something material and nostalgic from her own childhood and understand the attitudes of her angst ridden mother before moving on in life.

Madeleine Girling’s theatrical attic set exists on two levels of reality, those of a literal place and a figurative place. Its literal reality is the physical, actual dimension that can be seen and communicated with through our physical senses. The figurative reality is that which is invisible, untouchable, greatly poetic and represents the abstractions of Evelyn’s soul. Also, for those who may have visited Auschwitz the pile of personal items forming the Kindertransport attic junk may also be seen as a physical time echo of the mound of everyday artefacts left from the lives of the exterminated Jewish people and opponents of the Nazis.

At the heart of the Kindertransport play the present time is also the past and future. There is no separation of chronological states on the stage. Indeed, action from different eras move around each other, often in very close proximity with action and text blending and glueing the tale solidly together. Everything co-exists. Two other vital elements excite and focus our attention on the unfolding drama. Those are the enigmatic lighting design of Alexandra Stafford and audio excellence of the work of composer and sound designer Jon Nicholls.

In this particular production we have the brief but all important first act inclusion of eight members of the Nottingham Playhouse Youth Theatre as Kinder being sent away to unknown futures via the Kindertransport. Their inclusion adds deeply to the poignancy of the play.

Finally, this reviewer would like to repeat an important question from Diane Samuels herself: “Do we need ways of embracing the sense of loss that lies at the heart of the human condition? Isn’t art, including painting, dance, music, sculpture and theatre a way of getting there- to those raw feelings – safely?”

This year is the 80th Anniversary of the Kindertransport where more than ten thousand Jewish children where brought to Great Britain and other countries to escape Nazi Germany in 1938. Many of these young vulnerable people never saw their parents again because of their extermination in concentration camps.

Phil Lowe (reviewer) would like to acknowledge Diane Samuels’ excellent resource book Kindertransport – the author’s guide to the play  as being invaluable in writing this review.

There is also an excellent display in the Nottingham Playhouse foyer about the history of the Kindertransports by Amy Williams, a PHD researcher from Nottingham Trent University. It includes stories of the survivors. 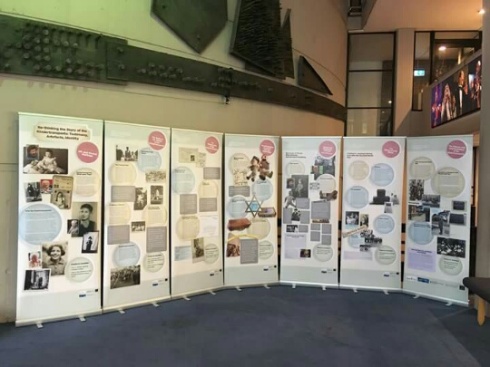