OPERA NORTH BRINGS TRAGEDY AND TEMPTATION TO NOTTINGHAM THIS AUTUMN

Opera North celebrates 40 years since its establishment as the opera company for the North of England with a season of contrasts at the Theatre Royal Nottingham from 7 November, pairing an acclaimed new production of Tosca with a revival of its lavish staging of The Merry Widow.

Following his 2017 production of Hansel and Gretel, director Edward Dick stages Puccini’s popular melodrama as a high-octane political thriller whose themes of love and lust, cruelty, self-sacrifice and the abuse of power are as keenly felt today as they ever were. A spectacular set by Tom Scutt brings together ancient and modern beneath a monumental gilt and frescoed dome, which rotates to frame the action. 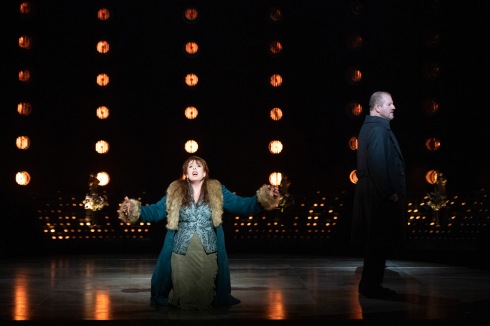 Susannah Glanville takes on the role of Rome’s star opera singer, Floria Tosca, while Mexican tenor Rafael Rojas (Gustavo, Un ballo in maschera, 2018) sings Mario Cavaradossi, the artist Tosca loves and will do anything to save. Robert Hayward (Wotan, Die Walküre, 2016) sings the part of their nemesis, the corrupt Chief of Police, Scarpia. Antony Hermus conducts. The arias “Vissi d’arte” and “E lucevan le stelle” are among the best loved in all of opera, and the awesome “Te deum” hymn finds the full Chorus accompanied by vast orchestral forces, organ, church bells with the same pitch as those in St Peter’s Basilica, and cannon fire every four bars.

Tosca’s tragedy is followed by a revival of Lehár’s effervescent operetta, The Merry Widow. Hanna Glawari is a young, beautiful and stupendously wealthy widow visiting Paris. Suitors clamour for her hand but the fate of her near-bankrupt home nation of Pontevedro depends on the choice she makes.

Director Giles Havergal’s witty yet stylish production is complemented by Leslie Travers’ fin-de-siècle set and costume designs. Katie Bird (Kate Pinkerton, Madama Butterfly, 2018) takes the role of Hanna, with Quirijn de Lang (Sam, Trouble in Tahiti, 2017) as Count Danilo, the flighty young Pontevedrian diplomat on whom the hopes of the nation are pinned. Uniting Parisian sensuality with Viennese sophistication, The Merry Widow’s lush, glittering score is a riot of colour. Elegantly whirling between can-can, galop and waltz, it is studded with songs including Hanna’s folk-story ‘Vilja’ and the ‘Love unspoken’ duet.

Once again, Opera North’s visit to the Theatre Royal will be preceded by a free performance of its latest Whistle Stop Opera, which pops up at the newly-reopened Malt Cross on Monday 5 November. Directed and narrated by bass baritone John Savournin, this fun 30-minute taster packs in comedy, tragedy and beautiful music from The Merry Widow, Tosca and The Magic Flute, performed by three singers and an accordion player. Newcomers to the art form can whet their appetites for the mainstage performances later in the week, when John can be seen as Angelotti, the prisoner whose desperate escape provides Tosca’s powerful opening.

The Whistle Stop Opera will visit local schools on Tuesday 6 and Wednesday 7 November, and a Little Listeners concert by a string quintet from the Orchestra of Opera North gives a reception class audience an introduction to the joys of live performance at the Theatre Royal on Friday 9 November.

“Opera North’s purpose is to create extraordinary experiences every day, using music and opera to entertain, engage, challenge and inspire. In this, our 40th year, we seek to reinvigorate our incredible art form for the 21st century, and to share our work in new ways with more people across the whole of the North of England and beyond.”

Opera North’s Autumn season at the Theatre Royal Nottingham opens with Tosca on Wednesday 7 November (repeated on Friday 9 November, with Audio Description and a pre-show Touch Tour available), and The Merry Widow on Thursday 8 and Saturday 10 November. Tickets are priced from £15.00 – £62.00 + concessions, and members of Opera North’s Under 30s Scheme, Go Card Holders and Students can buy a ticket for just £10.00. For more information and booking, visit trch.co.uk or contact Box Office on 0115 989 5555.

A seriously fun half hour packed with comedy, tragedy and beautiful music from The Merry Widow, Tosca and The Magic Flute, performed by three singers and an accordion player. The perfect taster for Opera North’s mainstage season at the Theatre Royal in Nottingham later in the week, for newcomers and opera buffs alike.

Sung in Italian with English titles

Tosca, Rome’s star opera singer, is deeply in love with charismatic artist Cavaradossi. When he is arrested and tortured by Scarpia, the corrupt Chief of Police, Tosca becomes the victim of cruel blackmail: she plots her revenge, but the consequences are more terrible than she can imagine…

One of the world’s most popular operas, Puccini’s melodrama of lust and love, cruelty and self-sacrifice, portrays people at their best and very worst. The high-octane score veers from tenderness to brutal power and includes Tosca’s famous passionate aria ‘Vissi d’arte’. Edward Dick’s acclaimed new production for Opera North is played out beneath the domes and frescoes of Renaissance Rome, with a stellar cast including Susannah Glanville as Tosca, Mexican tenor Rafael Rojas as Cavaradossi and British baritone Robert Hayward as Scarpia.

The question of who the young, beautiful and stupendously wealthy widow Hanna Glawari will take as her second husband is a matter of national economic importance for the nearly bankrupt Balkan state of Pontevedro. If she marries a foreigner, Pontevedro will lose Hanna’s millions. So when the widow arrives in Paris, it’s a cause of high excitement among French bachelors everywhere and high anxiety for the Pontevedrian ambassador, Baron Zeta, who must do everything he can to make sure she remarries a suitable – Pontevedrian – man.