Some of you may not be aware that I was going to use my redundancy money from my  former day job at Tesco to allow me to take six months off to complete a writing project called The Total Joy of Travelling On Public Transport. It’s a book of humour. Well, I finished the project a few days ago and the manuscript (all 60 A4 pages) has now been emailed to my publisher. I am hoping that it will be on sale on Amazon (Kindle download and paperback) late November or early December. I am relying on it selling for my future income.  Believe me there is plenty of drama in it and I hope that it will make my readers smile, rather a lot. Any support from you guys would be much appreciated.

Here are the first couple of pages to whet your appetite.

Ah, the total joy of travelling on public transport. Do you love travelling with the delightfully varied public and their dubious electronic gadgets and often odious habits? Do you mind when the person behind you has a full blown argument on their mobile phone with the speaker positioned at extra loud, just so you are sure to get both argumentative sides of the mutual yelling? Is it OK for someone to apply their nail polish on a hot bus, thereby nearly choking the other passengers to death with the toxic fumes? Would special mobile confessionals built into modes of public transport ease the congestion of verbal diarrhoea from total strangers? Do you balk at getting up close and personal with the great unwashed? Are you the kind of person that finds the joys of travelling on public transport highly amusing or, would you rather just throw yourself under a bus? 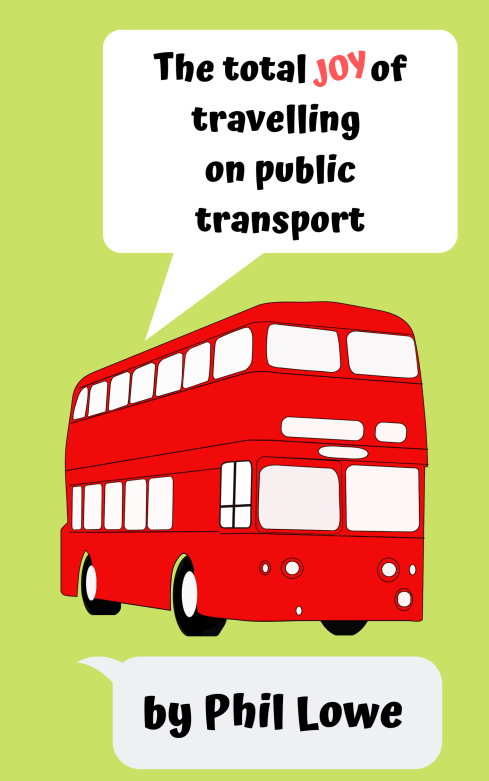 Many thousands of people in Great Britain travel to work and back on public transport. We commuters use the buses, trains and trams, on average, around five days of the week. We endure the pleasure of other passengers talking loudly on their mobiles. Season after season, we delight in strangers coughing their germ clustered spittle all over us, almost to the point where we wonder if it is actually raining inside the vehicle. Some other passengers sit crunching sweets like a starving deaf horse and some salivate wildly as they delve into endless bags of stinky squid and blue cheese flavoured crisps. And, quite often – well, let’s just say it – it gets much worse! I know. I have been there. I mislaid the tee shirt and bought an annual travel pass.

I used to work for a major supermarket as a butcher and fishmonger. During my eight and a half years of working there I made twenty combined bus and tram journeys a week to work. That’s four a day, five days a week, totalling approximately a thousand minutes or sixteen and a half hours sitting on public transport in order to get to work. That’s proper commitment for you. Most days the commuting necessitated early morning travel and late afternoon returning home in the rush hour traffic. On a Thursday and Friday it was midday travel to work and then I’d be travelling home at night with a bus load of excitable half naked and semi pissed young folk heading into Nottingham to go clubbing. Or whatever young folk do these days. Half naked and pissed Bible study perhaps.

Occasionally I read whilst travelling, but mostly I just people watched. It was fascinating. As a writer and observer of life I was making notes and sometimes recording my observations onto a Dictaphone and trying not to be obvious about it. My inner comedian regularly found himself seeking out comedy gold in the habits and relationships of my fellow travellers. When the chance came I would write my wry observations down in a notebook or on scraps of paper at work. Little did I realise how useful they would be as aide memoires in eventually writing this book.

It was just a writer’s habit to document things and to amuse myself at the time. Like many people, I love to people watch but less (first joke alert) through high powered binoculars these days. Often events were funny or disturbing or even both and I assumed I would definitely remember them without recording them in some way. Even an hour later I would be trying to tell a quirky travelling incident to a mate at work and I would struggle to recall what had made me smile or nearly throw up on the journey. Try doing those both at once. Or better still, don’t. Eventually, once this book seemed like it was going to be a reality, I made it a rule to make sure I documented.

Most of the stories in this book are focussed on my travels around Nottinghamshire. Some of the stories occurred at the time when the Broadmarsh shopping centre bus station existed. It has since been demolished and now the massive building site is slowly being re-developed into a new travel centre with a new bus station. No doubt, the poorly looking black foot pigeons that made their crude razor wire edged homes, in and around, the old bus station will return to re-home themselves in the future pigeon friendly, steel and glass palace of bus travel. In the meantime they will be putting their crippled avian feet up in sunny Spain and knocking back the Spanish beers whilst topping up their suntans. Who can blame them? Sometimes, I wish I was a pigeon.

Critically, a few years ago, a new tram line was built and I made full use of it to convey me from Nottingham to work in the small town of Beeston. I was delighted by this as it often meant less bus travel where it felt it was like travelling in a mobile doctor’s surgery where all the travellers violently coughed and sneezed throughout the journey. Or as I half jokingly called it – the voyage of the eternally damned. Life can be as random as getting on the wrong bus twice in one day and believe me I have done that. 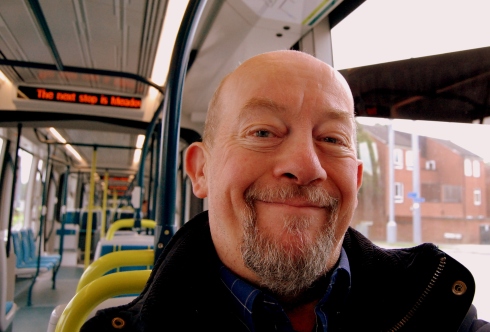 Reflecting that, the nature of this book wryly meditates on my travelling life in the following non-chronological and I suppose, rather random stories, of the total joys of a daily bus and tram commute to work. So, lovely readers, please dip into my amusing retrospective tales and enjoy my surreal humour. Like most forays into the public arena of life one encounters a degree of bad language and references to sex. Shock horror! This book has its share of these but my main reason for writing this is to share my experiences and daft flights of fancy. Enjoy the ride and hold on tight! Ding ding!