Opera North have a reputation for tackling the classics with a fresh eye and, despite its original production being in 1993, this performance of La Bohème is as gleamingly fresh as a pot of yellow paint. Updating the ‘action’ of the story to 1950s Paris, Director Phyllida Lloyd has stripped away the potential barrier between audience and story which a period production might have maintained.

The protagonists of the piece are students, young dreamers with their lives ahead and little to trouble them, apart from the inevitable lack of finance and direction. The story, such as it is, consists of brief glimpses into their lives at significant points, tracking their hopes and dreams, but primarily, following the tragic tale of Mimi and Rodolfo. 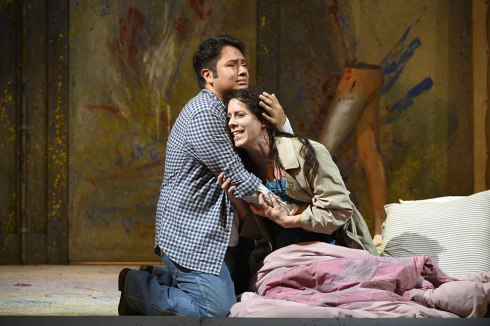 It is Christmas Eve, Paris, 1950s, and what could be more romantic? Mimi and Rodolfo meet by candlelight when the electricity runs out, and the spark of love is ignited. Rodolfo is an aspiring writer, Mimi a seamstress, both of them ordinary people, living ordinary lives and yet, they fall in love in an extraordinary moment. 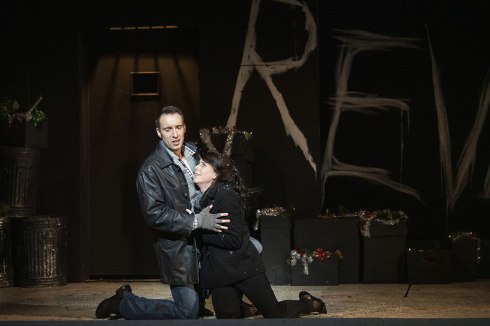 In this performance, Mimi is played by the remarkable Katie Bird, whose purity of tone and exacting delivery are matched only by her wonderfully naturalistic acting. She is, literally, the girl next door, and immediately empathetic. Rodolfo, Thomas Atkins on his debut with Opera North, is somewhat naïve and immature, but his clear torment at Mimi’s illness and decline makes us grieve with him. Atkins portrays the young poet with much skill and subtlety, and sings with a glorious warmth of tone and expressiveness.

What is unexpected about this production is the humour, and there is a light-heartedness about the show from the off. Set in an industrial-chic artists studio, Marcello’s oversized canvases, reminiscent of Matisse in their primary-colour glory and abstraction, are joyful and set the scene. The camaraderie between the flatmates Rodolfo, Marcello, Schaunard and Colline is robust and heart-warming, and flows naturally, helped along by the humorous surtitles to the sung Italian, which ensure the punchlines aren’t missed. The chorus scenes are pulsing with life, with sailors and nuns, children, shoppers and businessmen, bustling about their business on a snowy Christmas eve, and adding further to the frivolity with many small cameos. 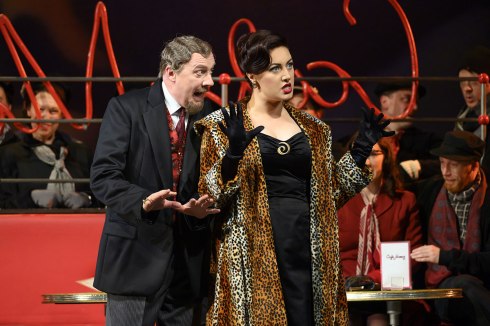 Anthony Ward’s set, a picture frame capturing snapshots of the everyday, and his understated but colour co-ordinated costuming, keep the show visually fresh and interesting, and the traditional 1950s banquette is used in a very untraditional way, to keep the action moving. The wonderful Orchestra of Opera North, under the baton of Conductor Renato Balsadonna, wrings every ounce of frivolity and tragedy from Puccini’s superlative score.

It is the scaling of the prosaic, human lives against the enormous universality of the themes of love and loss, which gives this opera it’s longevity. The emotional punch comes from the audience being able to recognise themselves in the everyday, and to understand the impact of the loss and grief when it comes. La Bohème is both intimate and colossal at the same time, and Opera North pay homage to that, and strip it bare to reveal its essence.

Our Amazon UK link to music, stage and screen books and all other products. Great offers.