Director Conrad Nelson cites in the programme that Much Ado About Nothing has ‘a living, vibrant language that supports an inspired playing style signified by quick wit and clarity of thought – and all that it means to be human. Our job is to be as good as the text. Our desire is to make it accessible to all.’ And they are and they certainly do. 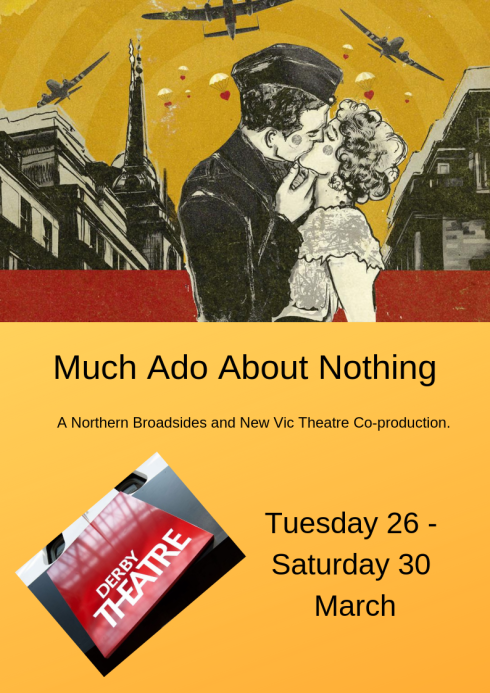 This Northern Broadsides and New Vic production is Conrad Nelson’s last directorial role for them and it’s a real cracker.

Shakespeare’s comedy written close to a decade of his playwriting career is laced with dark underlying tones and close to the end of the first half, and ongoing, it becomes borderline tragedy. It is full of Shakespeare’s finest wit and offers a superb opportunity for the female protagonist Beatrice to fully express sentiments in a strong female role that intellectually surpasses her male counterpart, Benedick. 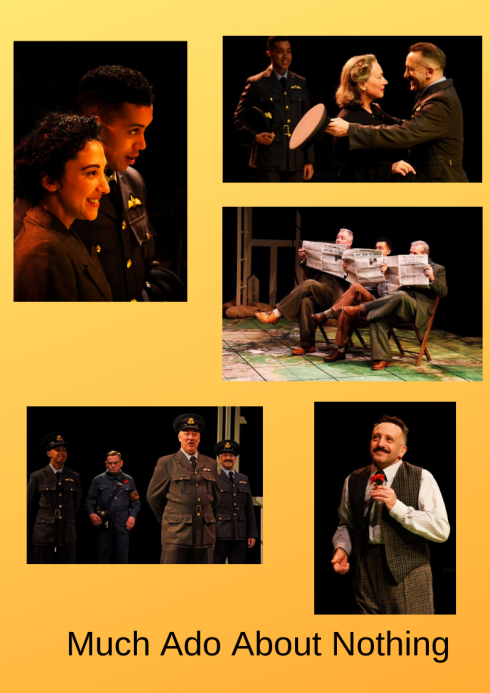 This version is set post World War Two and is laced with sections of popular songs and live music of the era that compliment the storyline exactly. Northern Broadsides make the work extremely accessible and the well known characters burst into life on the Derby Theatre stage. Although the show is nearly three hours traffic including interval, the viewing time flies by in a cavalcade of good humour, music and examinations of the human spirit, good and bad deeds and ultimately forgiveness.

I’ll tell thee what Prince, a college of wit crackers cannot flout me out of my humour… 5.4

Linford Johnson makes the most of young soldier in love Claudio and, as the part develops Johnson brings out the almost cruel unforgiving aspects in a subtle yet cocksure performance. There are many young teens in today’s audience who will surely see part of themselves portrayed on stage in Claudio’s persona and especially in the harshly  betrayed Hero played with beauty and grace by Sarah Kameela Impey.

Much Ado About Nothing has to have a bad boy to create a deeper sense of drama and the bastard Don John (Richard J Fletcher) fits the bill perfectly. Interestingly, in this production he is not played just out and out evil but is given much more light and shade in Fletcher’s creepy sleaze bag performance. No offence.

The Watchmen led by Dogberry (David Nellist in sublime form) are a hoot as soon as the motley crew of Dad’s Army style misfits appear on stage. Their bonkers saluting routine brings the house down every single time. The arrest of Conrade (Heather Phoenix) and Borachio (Anthony Hunt) by entwining them in knitting wool is inspired comedy.

The senior characters of Leonato (Simeon Truby) and Don Pedro (Matt Rixon) give the play much humour but also strong degrees of gravity in the second half. Both performances are naturally and very skilfully given.

Overall, this sterling updated version of Much Ado About Nothing by Northern Broadsides and New Vic most definitely warrants a visit and where better than at Derby Theatre where it runs until Saturday 30th March.