Daisy Pulls It Off was originally written by Denise Deegan in 1983 as a platform to provide new opportunities for actresses. Spoofing the wholesome Angela Brazil adventure books of the 1920s featuring jolly hard won games of hockey, crushes on the head girl and a plucky new girl at the posh boarding school who gallantly saves the day. The play has plenty of scope for tongue in cheek, larger than life, posh gel horseplay and lots of dashed fun daring do to do. I say! 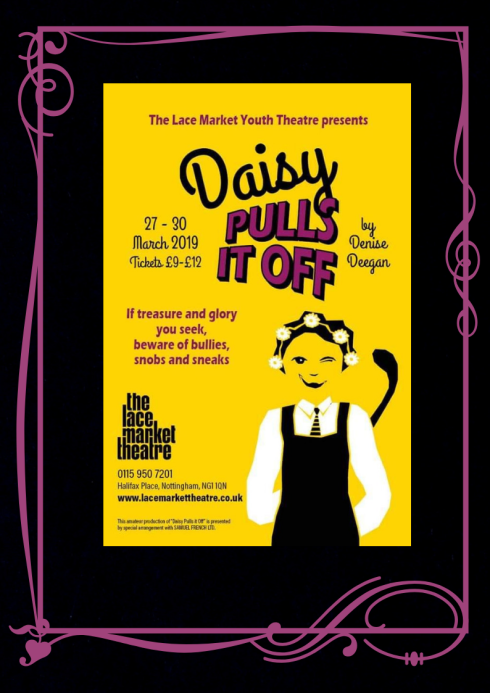 Daisy Pulls It Off is often given a showing at the Edinburgh Festival and now it finds itself airing its gymslip and straw boater world at the Lace Market Theatre in Nottingham. Director Sarah Ogando and her Lace Market Youth Theatre cast and crew do a sterling job in a quality high energy show.

Fulfilling a need to give the prominent female teen sector of the youth theatre a chance to show off their acting skills this company are working with two casts on alternative nights. Rather! So bring on soon to be best pals, bright scholarship girl Daisy Meredith (Mary Kirwin) and Trixie Martin (Adelaide Marshall) and let them loose to deal with school pressures and those dashed awful bullies in Grangewood School for Girls. And hopefully together they will find the missing Beaumont treasure. Hinc spes effulget!

This production sports an excellent functional set design by Phil Makin and the imagination takes us to other locations like the hockey field and the crumbling cliff face. Golly! The cast are between twelve years old and eighteen and all of them work hard in a first class production. The piece requires exuberant acting and plenty of fizz to get across the comical parody nature of  Deegan’s spoof. This teenage cast do well to keep up the energy and pace throughout and give us lots of laughs along the way.

This evening Mary Kirwin sparkles as Daisy and convinces us of her earnest desires to do well at school despite many a knockback. We really want to root for Kirwin’s plucky Daisy and she shows us her determination against all the odds. Life can be awfully beastly at times but our Daisy isn’t going to let that get her down. Adelaide Marshall as the very friendly and nutty Trixie Martin is a joy to watch and really lets herself go in her portrayal of the gushing girl who has plenty of pluck. Martin’s work is a benchmark for the whole cast in terms of being an ironically aware character in the style of this show.

There needs to be an obvious balance between caricature and realism and this is captured well in some of the other main roles of Sybil Burlington (Roisin Kelly), Monica Smithers (Maddy Stephens), Clare Beaumont (Nina Dury) and Alice Fitzpatrick (Katherine Watts). 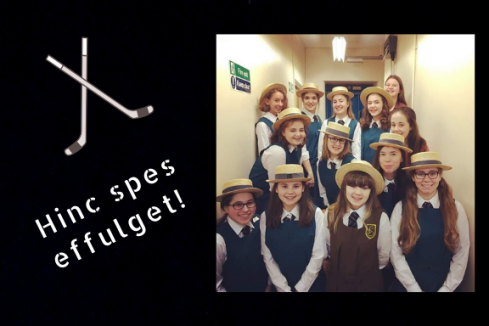 Daisy Pulls It Off  by the Lace Market Youth Theatre is a well realised production and proves to be yet another high standard offering which gives us the delightful chance to witness today’s young people thoroughly enjoying presenting this difficult to get right piece. And get it right they jolly well do. It’s a spiffing lark and top marks LMT. Hip hip horray! By golly they’ve blinking well pulled it orf!