The RSC’s touring production of Romeo & Juliet fast-forwards Shakespeare’s most famous love story to a combative, contemporary world. In so doing, Director Erica Whyman highlights the hatred and bitterness within society, which eventually leads to the lovers’ inevitable doom. Swap a rapier for a knife, the Montagues and the Capulets for street gangs, and suddenly, the present day is right in front of you. It is a story about death, as much as it is about love.

Whyman has stated that with this new production, she wanted to make it relevant to teenagers today. She aims to spark the interest of exactly those who should most closely identify with Romeo and Juliet, teenagers falling hard into first love, with passion and utter conviction. And those same teenagers who might normally be detached from engaging with Shakespeare as it appears to be so much of a traditional ‘institution’. Judging by the positive reaction of the many young people in the audience, this production succeeds.

The present-day world created feels very familiar – the dress is ‘street’ modern, tracksuits and hoodies, smart suits and asymmetric dresses. The haircuts, the swagger, the attitudes, all reflect today’s society. Likewise, the cast feels very ‘real’, a mix of ethnicities, genders, ages and sexuality, representative of the UK’s complex differences. There are many and varying regional accents, and some of Shakespeare’s lines are rendered funnier or more poignant on these divergent tongues. Occasionally, as in the Prologue, there is such a broad mixture of accents, it is tricky to catch everything being said. Interestingly, the prologue is there to tell us what is going to happen in the story, but also, by signalling the fate of the star-crossed lovers in the beginning, it foretells their destiny, and the play creates its own enclosed world, sealing the lovers’ fate.

The modernity of the social setting is reflected in the staging by designer Tom Piper. A looming, metallic façade lends an industrial feel; rusting, textured panels allow the sophisticated lighting design by Charles Balfour to take centre stage, sculpting the many surfaces with colour and shadow. A central ‘box’ is tumbled and turned to create plinth, balcony, Friar’s cell and tomb, and gives the actors the opportunity to expend their youthful energy, climbing up and dropping down, parkour style. The ‘living wall’ of Friar Laurence’s cell is the only ray of light and splash of natural colour in an otherwise monochrome world.

The star-crossed lovers themselves have been given a makeover and this is where the updating of the story really comes to life. Romeo is popular, a dreamer, in love with the idea of love before he has any idea of what it really means. Bally Gill’s portrayal has a touching naivety; he is tongue-tied and stuck for words on meeting and falling for Juliet. He makes the most of the humour in the love-struck teen but also conveys the harrowing contrast when he murders Tybalt in revenge for Mercutio’s death. 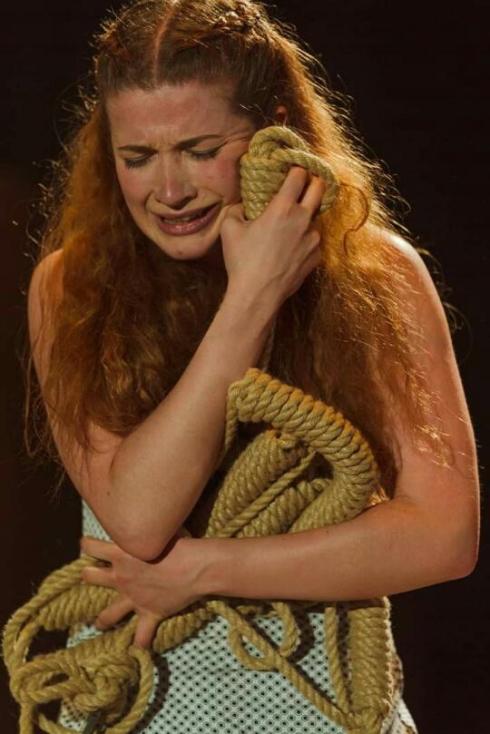 Juliet is played by Karen Fishwick, who is simply outstanding. This Juliet is no delicate flower, awaiting with fanciful ideals her imaginary love. She is astute and wary, honest and passionate, gushing and talkative in her excitement at meeting Romeo, and yet conscious of the need to be more constrained. Fishwick powerfully conveys the complexity of emotions when she discovers Romeo has slain Tybalt, her fury and grief fighting against relief and guilt. She is one of those magical actors who can make Shakespeare’s language sound entirely comprehensible, purely through their delivery. 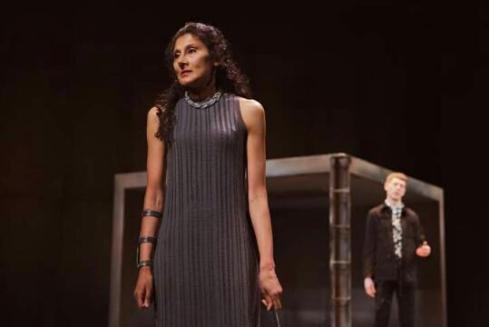 Amongst the multi-talented cast, some of whom play multiple roles, there are many fine performances. The Nurse, Ishia Bennison, is a loud, flouncy, rather coarse yet tender confidant to Juliet and there is great rapport between them. Mercutio is played as a woman, and Charlotte Josephine is compelling in this role, with a rawness of energy that is both intriguing and rather frightening. She makes the most of the sweeping speeches and the space on the stage with her in-your-face physicality. The RSC has been running many workshops locally alongside their touring production, one of which has led to eight fortunate young women from the Bluecoat Beechdale Academy being part of the show in Nottingham.

Shakespeare’s plays and the themes within them are still relevant today because they focus on universal, human experiences. Love, honour, betrayal. Family versus society. So long as fresh adaptations like this can allow us to reconsider the text from a different perspective, they will continue to speak to the teenagers of the future. It is written in the stars.