EMBARKING ON A UK TOUR FROM SEPTEMBER

Shane Richie will play ‘Archie Rice’ in a brand-new production of John Osborne’s The Entertainer – chosen as one of the greatest plays of the 20th century by Michael Billington. 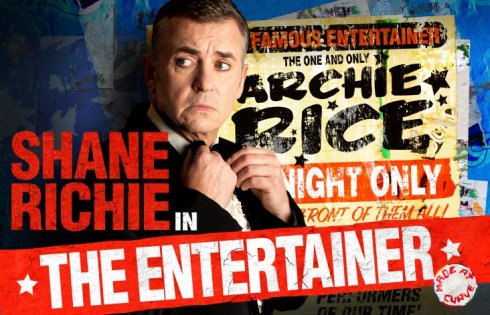 Directed by Sean O’Connor, this innovative adaptation will open at Curve on 27 August 2019 and then tour the UK until November. For the first time since its premiere in 1957, this classic play will be given a vibrant new setting.

1982: Archie Rice is a washed-up entertainer playing a summer season. As his soldier son sails with the Task Force to liberate the Falklands, his daughter Jean returns from campaigning against the war, and Archie’s professional and personal lives collide with devastating consequences.

Curve’s Chief Executive Chris Stafford and Artistic Director Nikolai Foster said: “Osborne’s masterpiece was first presented in 1957 and alongside Archie Rice’s failing career, invited the audience to consider its own culture and what it meant to be English at a time of huge shifts within British society. Times have clearly changed, but as our country faces one of the most tumultuous periods since the end of the Second World War, the play once again captures the zeitgeist and is tantalisingly ripe for revival.

“It’s a thrilling play – epic and filled with humanity – and provides Shane Richie with a role he was born to play; we know it will be an hilarious and heartbreaking performance. We are also thrilled to welcome director Sean O’Connor to Curve, whose compelling vision for the play will reveal it afresh to an entirely new generation.”

Shane Richie said, “Following in the black patent shoes of Olivier, Gambon, Lindsay & Branagh, it’s an incredible honour to be asked to play one of literatures greatest fictional characters, Archie Rice. In the words of the great man himself “you’re a long time dead, let’s just whoop it up!“

Sean O’Connor said, “Osborne’s story of a man who faces the end of his career in the declining days of a popular art form in the context of Britain struggling to establish its place on the international stage has never seemed more relevant or more timely.

Against the backdrop of the Falklands War of 1982, the satirical new world of alternative comedy has dismissed Archie’s style of humour and his sort of act as old–fashioned and even offensive. The mother-in-law joke has been outlawed and a generation of entertainers like Archie have suddenly found themselves irrelevant.

At the same time, in the wake of recent abuse scandals, a certain cultural attitude- and a certain sort of man- has been exposed as outmoded and redundant; this is an Entertainer for 2019.

It’s a tribute to Osborne’s genius that this play resonates beyond the historical moment it was written in and speaks to us directly today with such prescience, power and truth. It’s THE state of the nation play, but it’s also a moving examination of family and failure as well as a defiant roar in the face of the relentless inevitability of change.

I’m hugely excited to bring this new vision of one of the 20th century’s finest plays to the stage and completely thrilled to have secured Shane – one of the great entertainers of today- to play one of the most iconic roles in British theatre.”

Shane Richie has balanced a hugely successful forty year career between theatre, film & TV; and he has been a regular fixture on prime time television hosting such shows as Lucky Numbers (ITV), The Shane Richie Experience (ITV), Win, Lose or Draw (ITV), Don’t Forget the Lyrics! (SKY1), Reflex (BBC) and Win Your Wish List (BBC) to name but a few!

His numerous TV drama credits include Oliver Twist (BBC), New Tricks (BBC), We’re Doomed: The Dad’s Army Story (BBC), What We Did on Our Holidays (ITV), The Good Samaritan (ITV), As Good As It Gets (ITV), Skins (CH4), Moving On (BBC), Minder (CH5), Redwater (BBC), Benidorm (ITV), and Claude (Disney). Theatre credits include the London West End and Manchester production of Grease and One Flew over The Cuckoo’s Nest for a National tour. He stared in the musical Scrooge, and in two American classics titled ‘Lone Star and ‘Private Wars’ at The Kings Head Theatre London. February 2019 Shane stared as Hugo/ Loco Chanelle at London West End theatre, The Apollo in Everybody’s Talking about Jamie. And from the acclaimed writer Peter James, Shane played the leads in The Perfect Murder and Not Dead Enough. Shane also co-wrote and co-produced the national UK tour of ‘Boogie Nights’ which went on to a sell-out season at The Savoy Theatre in London’s West End. Film roles include Macbeth (CH4), The Reverend (Burn Hand Film), Prisoners of the Sun (Miromar Entertainment) and Flushed Away (Dreamworks Animation). In 2002; Shane created the lovable rogue Alfie Moon featuring in BBC One’s Eastenders. (Continuing). The role went on to earn Shane several industry awards and many accolades including Best Actor at the Rose d’Or Television Festival. In 2003 Shane wrote No.1 autobiography in The Sunday Times- Best Seller “Rags to Richie”. In the same year, he released the No.1 record ‘I’m Your Man’ for BBC Children In Need. In 2017 Shane’s album ‘A Country Soul’ released for Warner Music; made it to No.1 once again, securing his position as the UK’s biggest selling country artist.

The Entertainer is a co-production between Curve, Anthology Theatre, and Simon Friend Entertainment.

Further casting and creative team to be announced. www.TheEntertainerPlay.co.uk

To find out more about Curve, visit www.curveonline.co.uk

Tickets for The Entertainer at Curve will go on sale to Curve Friends and Supporters on 20 Feb, to Members on 21 Feb, Groups on 22 Feb and on general sale on 25 Feb, all at 12noon. Tickets can be purchased online at www.curveonline.co.uk, over the phone on 0116 242 3595 or in person at Curve’s Box Office.