It is rare in theatre to be presented with a show that has gentleness, kindness, humour, slow moving art and honesty woven into its subtle tales. This is precisely what Extant and Yellow Earth’s Flight Paths has in spades. It does so through the medium of two blind performers, Amelia Cavello and Sarah Houbolt with Takashi Kikuchi, Victoria Oruwari and Megumi Kubota as ‘The Voice’.

Flight Paths is a many layered performance that grows on one and has its roots in the Japanese world of the Goze blind story tellers and musicians that toured medieval Japan making a living from performing epic tales. It also has its roots in the biwa hōshi who were seen not only as entertainers but having shamanistic skills that gave them access and influence with good and evil spirits. Their practice too incorporated singing and storytelling. Originally they had a string instrument called the biwa, a Japanese short necked fretted flute which was later succeeded by the shamisen, a three stringed traditional Japanese musical instrument derived from the Chinese sanxian. These things are central to the development and writing of Flight Paths by Glen Neath. We discover history repeating itself in this brief modern story that surrounds us with ghosts of the past and present, voices, music and very interesting motifs. It is refreshing to hear about the world of blind and partially sighted people and this gives a deeper understanding of this part of our shared humanity. 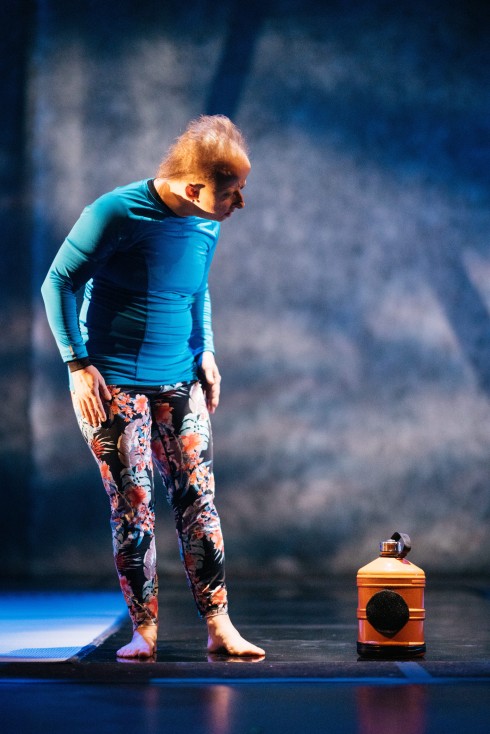 Japan is ever present in its unfolding, its preparations or paths, its dramatic and specific separation of the acts. We also discover the human flight among the hanging grace of the silks and the deftly interwoven stories of blind entertainers. Both Cavello and Houbolt are charming and natural story tellers. They engage us in their life experiences and demonstrate the skills of bodily expression through the hanging silks – occasionally with some great humour as we learn that the art has some painful moments in its execution. Both performers rely on each other a lot and we get a great sense of their real camaraderie that comes off the stage like two happy beacons of light.

The ‘Voice’ characters (Kikuchi, Oruwari, Kubota) are beautifully portrayed through projected means through the work of Terry Braun and the bold coloured Japanese set design is created by designer Becky Minto.

Nao Nagai’s lighting is enigmatic in its subtle changes. The all important sound by Thor McIntyre-Burnie and Owen Crouch gives the piece much of its expressive heart.

Through the aerial and movement work by Victoria Amedume we get another dramatic tone that literally lifts us up into another world. Flight Paths is a moving work of theatre art that keeps on resonating long after the final departure of the performers.