The Jungle Book stage adaptation by Olivier award winning Jessica Swale, with music and songs by Joe Stilgoe, is prefect theatre going for ages six and above. Based on Rudyard Kipling’s stories from ‘The Jungle Books’, Swale and her creative team of actor/musicians from Royal & Derngate Northampton, Children’s Touring Partnership and Fiery Angel have co-produced a gem of children’s theatre. The Jungle Book is funny, vibrant, vital and very modern. 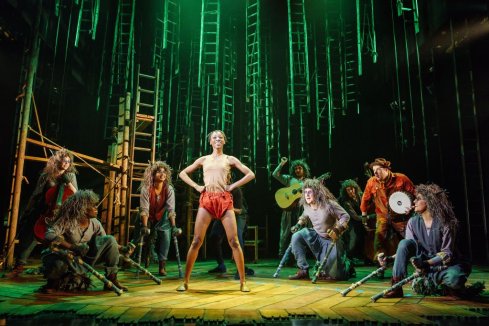 Kipling’s tale of the boy Mowgli raised as a feral youth by a pack of wolves and adopted by Baloo the bear and Bagheera the black panther; all united against the terrible tiger Shere Khan, is still very much alive in this adaptation but, written with enough modern language to amuse and beguile.

There are plenty of original songs too, both rousing, touching and comical. The revolving set includes plenty of climbing frame type ladders and raised playing spaces and instead of jungle creepers we have acres of descending ladders and ropes dressing the upper part of the set designed by Peter McKintosh. The atmospheric lighting and soundscape come from Charles Balfour (lighting designer) and Tom Marshall (sound designer). The clever puppetry is by created by Nick Barnes (puppetry director and designer). The show is directed by Max Webster who recently directed The Twits at Leicester Curve and Lizzi Gee is The Jungle Book choreographer. Diogo Gomes the percussionist provides the beating heart of the much loved story.

Keziah Joseph steals the show with her moving and lively Mowgli. With her strong singing voice and witty athleticism she is totally engaging throughout. Akela (Tripti Tripuraneni) and her pack of wolves are cleverly envisaged on short crutches for the creatures fore legs and the mother dog becomes another important element on Mowgli’s life towards the end of the show.

As Bagheera the panther Deborah Oyelade gives her animal character plenty of sassy class and sleek cat-like movements. Dyfrig Morris as Baloo the bear is a favourite with the both the children and the adults alike. He portrays Baloo as a food and drink obsessed bear with a loving protective heart and a touch of bravery when Mowgli is in danger. Rachel Dawson’s Kaa the snake is a sight to behold, at once laconic and then subtly tricking the bonkers monkeys into being crushed and eaten alive. The monkeys are very much a fun part of the show that has them as naughty rapper monkeys intent on sacrificing the boy Mowlgi to gain Shere Khan’s favour. 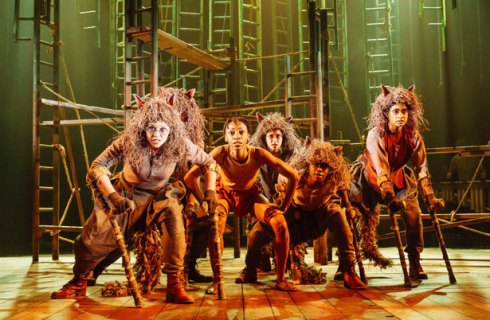 Lloyd Gorman’s Shere Khan the tiger (above) is measured just right considering the ages and vulnerabilities of the younger children in the audience. Gorman plays Shere Khan as demanding and dangerous but not so ultimately terrifying that the little kids wet their pants and are screaming out loud for their mummies and daddies. The cast of eleven also includes T J Holmes, Ruri James, Avita Jay and Chipo Kureya. Most of the singing/dancing actors also play instruments. The entire ensemble make the nearly two hours (inc interval) on stage zip by and bring this terrific adaptation of The Jungle Book to colourful life.

The Jungle Book runs at Nottingham Theatre Royal from Tuesday 17 – Saturday 21 April. Please check starting times online or when booking as they may differ from regular starting times at the venue.