As Andrew Lloyd Webber celebrates his 70th birthday it seems fitting that, Whistle Down The Wind, one of his earlier popular musicals from the late 1990s, should get a very accomplished, amateur airing, by Long Eaton Operatic Society at May Hall Trent College 10th – 14th April 2018. The production is directed with particular passion, verve and fine attention to detail by Kathryn McAuley. The excellent choreography is by Laurie Trott. 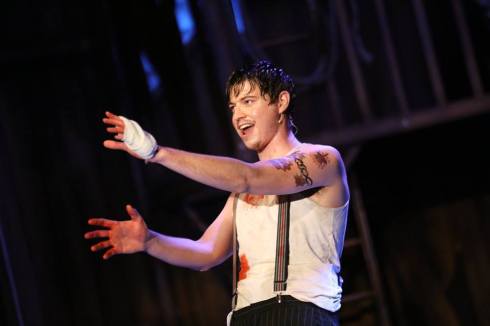 Tom Watkins is musical director and the show includes a fifteen piece live orchestra whose admirable talents bring the best out of Andrew Lloyd Webber’s eclectic and moving score. The lyrics for the show are by Jim Steinman. 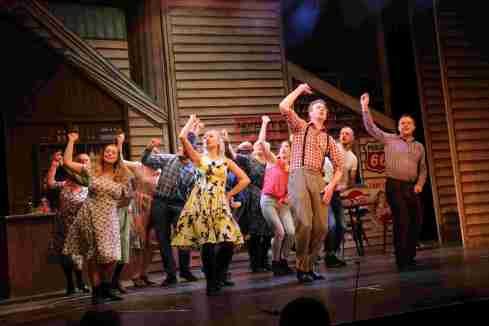 The ALW musical story of Whistle Down The Wind is set deep in bible belt Louisiana and it sees innocent and vulnerable young teenager Swallow mistaking an escaped convict hiding in the family barn for Jesus Christ newly returned to Earth bearing his blood soaked crucifixion wounds. The Man has wounds on his hands, his side and his feet and Swallow is 100% convinced this is her saviour and that he could perform miracles including bringing her recently dead mother back to the living. Eleanor Carty is Swallow and The Man is portrayed by Adam Daniels.

They make a totally believable pair from the opposite sides of the moral compass. Their joint acting and singing is magnetic throughout; Carty being the very representation of trusting angelic innocence and Daniels the personification of confused guilt and anger at once awed and repulsed by the notion of love and yet protective of his young protector. Their ‘Prayer/The Nature of The Beast’ is a powerful duet that totally moves and engages. 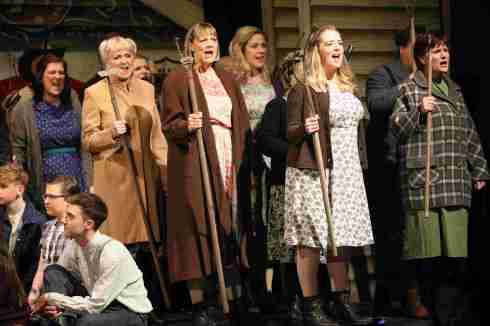 Many themes compose Whistle Down The Wind and many of them are aligned with religiosity and Louisiana lives in the late 1950s, strongly dictated by the words of the Bible taken literally and even in the extreme, serving no-one well. Guilt, blame and absolution, forgiveness, miracles and terror of the Devil in theory and incarnate loom large in this Baptist community. 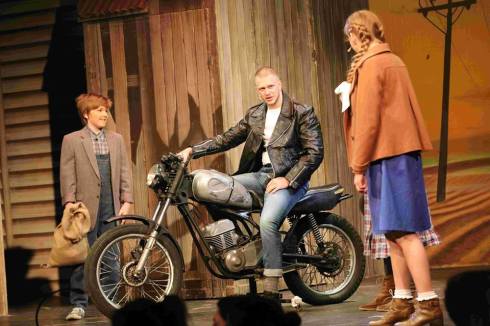 There are promises kept and promises broken in this story and faith is tested including the temptations of the flesh. This last aspect is sung about brilliantly in ‘A Kiss Is A Terrible Thing To Waste’ by Swallow, The Man and Amos (Jack Draper). A real motorbike on stage is a symbol of not only thrills on the open road but escape from a limited stultifying life and a potent symbol of sexual excitement in a world of restrictive policing from parents and the authorities. ‘Tyre Tracks And Broken Hearts’ is powerfully sung by Jack Draper and Katie McDonald (Candy) and both are very convincing in their roles.

Long Eaton Operatic Society’s Whistle Down The Wind boasts a large cast and includes many more talented young children and teens than would ever have been part of any professional production. Too costly and too many chaperones to employ! Their joyful rendition of ‘When Children Rule The World’ makes the heart sing with compassion and hope. These are the present and future talents of Long Eaton Operatic Society and are well applauded for their professionally done appearances throughout. Of similar age are Swallow’s siblings Brat (Lilly Simons -Clark) and Poor Baby (Jude Yellop). They light up the stage with their characters’ distinct quirks, humour and personalities. Martin Mould delivers a superbly sung role as the Father, Boone.

Older members of the LEOS ensemble show equal commitment especially with the rousing opening Baptist Minister and congregation number ‘The Vaults of Heaven’ and the end of act one song ‘No Matter What’. In this regard the opposing angles of the children and the adults works well to illustrate the differing adult/child interpretations of harnessing The Man for good or captivity. The company as a whole come across very strongly as a unit and representational of the Baptist community. 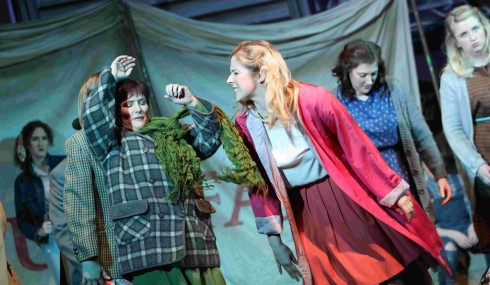 Coming to this production without prior knowledge of the story or the ALW musical version is interesting regarding the two stand out and well known songs ‘No Matter What’ and ‘Whistle Down The Wind’ that sat proud in the pop charts around 1996. In isolation they are nice enough tunes but when seen in context of this musical live their real meaning comes through better and thus they will always be beautifully associated with this production in this reviewer’s mind. They are both about care and ‘Whistle Down The Wind’ relates to fond family memories of Swallow’s dead mother. 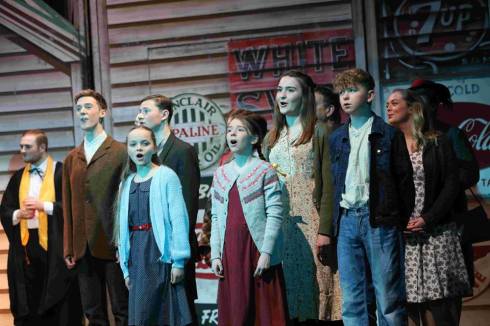 It fascinates to know that the reference to Christmas bonfires in the show and lyrics comes from the early Cajun settlers in southern Louisiana who brought many traditions that still stand today. One of them is a special Christmas Eve celebration that includes bonfires lit along the levees of the Mississippi River north and west of New Orleans. Fire is also a symbol for destruction, warmth and purification and new beginnings – which ALW has cleverly woven into the musical fabric of his show.

Rarely in a review do the back stage folk get a mention so it is with pleasure that we mention the back stage team in their work re-creating the backdrops and buildings on the superb set that turns itself into an open road, a complex barn set, a train tunnel and local farm houses with interiors and exteriors. All the set changes are ultra slick and are a pleasant part of enjoying this excellent production.

From Bugs and Bones we enjoy some three live snakes on the stage and they even have their own special green room to relax in when not hissing about on stage. Yes you have read that right. LEOS are not proposing to do Lion King next year with real lions. Just so you know.

For an opportunity not to be missed we would highly recommend this brilliantly enacted and sung drama-musical. It isn’t done that much so take the opportunity now.

One thought on “Review: Whistle Down The Wind. Long Eaton Operatic Society.”