Captain Edmund Blackadder says bleakly and comically, of the Great War, “For us, the Great War is finito, a war which would be a damn sight simpler if we just stayed in England and shot fifty thousand of our men a week.” This quote is from the popular Blackadder Goes Forth television series written by Richard Curtis and Ben Elton which aired in late 1989. It is typical of the ironic black humour of war weary Tommy in the First World War trenches and very typical of the comedy writing and structure of Curtis and Elton. Vitally, they were writing very specifically for the near-on genius talents of actor-comedian Rowan Atkinson – he of the rubbery face and satirically sharp, biting wit. He who can make his audience, with the plosive emphasis on a single syllable, “Isn’t that right Bob?”, laugh like the laughing toads of Toton, who’ve overdosed on laughing gas in laughing town.

Of late, three or four episodes of the television series have been loosely structured into an episodic exposition which is sold as a Blackadder Goes Forth show. If it were a play and the characters unknown to us it wouldn’t have the appeal that it does in its current form. Blackadder Goes Forth is mainly a vehicle for amateur groups and their audiences to present and enjoy and it seems they do so indeedy. There is ribaldry and rivalry going forth with keen amateur companies all over the country putting on productions to entertain Blackadder fans nationwide, with varying degrees of success.

And so, marching forward, heads held high, we bravely go into this review of Nottingham’s Encore Performing Arts production of Blackadder Goes Forth, dodging the bullets and waving our proverbial flag of critical kindness along the front line of staged comedies. ‘Encore’ have been proving their theatrical worth for a few years now with each production cast anew and not reliant on the talents of a core membership and historically this works very well building upon their reputation.

With their Blackadder Goes Forth they have chosen the format of four episodes with the evening split into two episodes per half. The episodes chosen are Captain Cook, Corporal Punishment, Major Star and the poignant last episode Goodbyee. The director is Emily Cook and the show is produced by Adam Guest and Sam Griffiths. The set is designed by Terry Stevenson and the authentic (although lacking trench mud) costumes are from Nottingham Community Wardrobe and Sherwood Rangers. The performance fees are donated to Comic Relief.

It doesn’t stretch the imagination too much to assume that the majority of the first night audience at The Space – Nottingham Girl’s High School are made up of Blackadder fans, some of whom could happily quote and mis-quote their favourite sarcastically witty lines and there are plenty in this show. This peculiarly dangerous aspect is where a knowledgeable ‘smiling’ audience of fans doesn’t cut the mustard gas. Smiles are hard to be heard and unnerving for a cast that is expecting the chuckles and guffaws they have experienced amongst themselves and worked hard for throughout their rehearsals. The occasional, shy back of the stalls laugh, receding like a giddy skylark chuckling over the Somme and then dropping dead, is helpful but not enough. In act one this uneasy state of audience silence not responding to the humour, is only broken by the entrances of two of the dafter characters Private Baldrick (David Hurt) and General Melchett (Graham Buchanan). 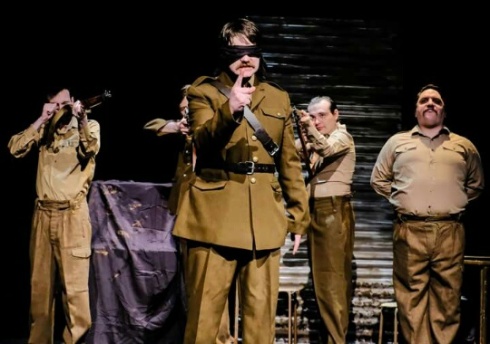 The obvious acting talent of John Lowe as Edmund Blackadder is somewhat overshadowed by the broader base characters. Whilst the cleverly written structure of the intelligent wit is there in the spoken text and plainly recognised by Lowe – we hear it in his phrasing – it is underplayed vocally and needs more pointing and vocal punch. This would allow the performance to work well alongside the broader elements creating an equal playing structure. This is also the responsibility of the director Emily Cook to make any actor aware of too naturalistic a playing in a heightened comedy such as Blackadder Goes Forth. As the play progresses and especially in the second half where the character of Blackadder is allowed more emotional bluster things improve distinctly. The Edmund Blackadder text isn’t easy to do and a challenge for any actor and big comedy boots to fill especially those of its originator Rowan Atkinson.

By the second half and a with a few drinks under the audience’s belts the reactions to the comedy become more obvious with some genuine laugh out loud moments occurring and the cast more relaxed.

Private Baldrick is beautifully done by David Hurt who is clearly enjoying playing the grubby and witless comedy icon and foil to the more intelligent and acerbic Captain Edmund Blackadder. Silly ass The Honourable George Colthurst St Barleigh (Chris Mundy) is a delight every time he appears on stage and his interactions with Edmund Blackadder are gloriously funny. Mundy’s character is one character that can survive not being played as a Hugh Laurie version and Mundy does it well, genuinely making it his own. With Private Bob we have Emily Fox in the role and this reviewer wishes that the script allowed us to see more of her comedy moments than we do.

In Graham Buchanan we have the perfect ‘totally bonkers’ General Melchett. Any larger than life character like this will clearly dominate the stage proceedings but whilst deliberately OTT Buchanan is more than generous in allowing his fellow actors their moments. Chris Reed is another who makes Captain Kevin Darling his own and relies less on a twitchy face and more on portraying the snide remarks and put down looks of the cowardly Captain. Buchanan and Reed work very well as a pair in a way that mirrors Blackadder and Baldrick and Buchanan’s Melchett is sublime as he goes from over the top bonkers to ordering the men and the reluctant Captain Darling over the top to their deaths.

In the second episode Corporal Punishment there is a spot on comedy moment with the following actors playing the firing squad and their Corporal Jones. All of the small part actors prove the adage that there is no such thing as a small part and Adam Guest, George Johnson, Bertie Black and Jack Readyhoof big it up to great comedy effect. It is one of the highlights of Encore’s Blackadder Goes Forth.

As we leave the Gatling Gun world of reviewing this reviewer concludes that Encore have chosen bravely to present this show to die hard fans out there. But ultimately, they battled on and the big bomb blast of applause at the end proves another success for them.

The production is also raising money for The Royal British Legion. Please give generously when you go to see Blackadder Goes Forth.