Spamalot the musical was the vision of Eric Idle which finally came to the stage in its Broadway premier in March 2005. It is based loosely on the  Monty Python and the Holy Grail film but includes scenes and songs lifted from other films, such as ‘Always Look on the Bright Side of Life’ from The Life of Brian. It’s definitely a generational thing, as the average age of the audience will testify but there is plenty to entertain the few who may never have seen any Monty Python. (One has to ask, where have they been living?!)

The original film in 1975 was produced on a tiny budget – so small that they could not afford horses for the knights. From this arose one of the most iconic elements of the film and stage adaptation, the use of coconuts for the sound of horses’ hooves. Indeed how it might otherwise have been staged is a mystery. It is such a simple device but provides never-ending entertainment, and requires a good deal of skill from Rhys Owen, who plays Patsy. The tap-dancing on a box routine is quite something! 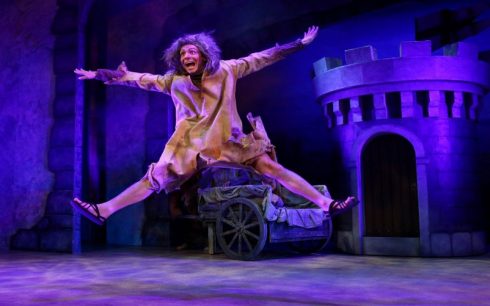 Unlike the film budget, this touring spectacular seems to have spared no expense in the costume department, with dozens of changes, chain mail and armoury, sparkles, glitter and showgirl outfits (and that’s just the men). The staging is simple but very effective, allowing all the actors maximum space to prance, dance, gallop and generally wear themselves out to the point of exhaustion. The energy levels are incredible and continue unabated to the very last song. It is quite exhausting just to watch.

Each character is brought to life with charm and humour: Bob Harms as King Arthur has a dour, churlish air which nicely inverts his royal position and contrasts with the enormously over-the-top characters beside him. His understated humour and perfect comedy timing is one of the highlights. Surprisingly, in such a bonkers show, there is a storyline to follow through the knights, and each is superb in their own way. Sir Lancelot discovers himself: ‘Move aside your scabbard, for underneath your tabard, there is waiting to escape a butterfly’. Sir Galahad (aka Dennis or is it Thomas or even Neil?), is played by Norton James with huge energy, his debate with King Arthur on the nature of power and class summed up with ‘Strange women lying in ponds distributing swords is no basis for a system of government’. Brilliant! The disparity of the intellectual arguments brought by the lower class characters against the ignorance of their societal superiors is one of the trademarks of Monty Python and never fails to ring a clanging bell with the audience.

Sarah Harlington plays The Lady of the Lake and gives a virtuoso vocal performance. Her voice is strong, powerful, completely controlled, moving from belting top notes to operatic, through jazz and virtually every other style with ease. And alongside this, she manages to act her comedic socks off. Just stunning.

The songs from the show are super catchy and funny, ‘I Am Not Dead Yet’ one of the early highlights from a corpse on a wagon, who is clearly not quite dead from the plaque. One of the best known, ‘The Song That Goes Like This’, mocks the very nature of musical theatre songs, whilst being a great song in itself. And the audience is finally encouraged to join in with a rendition of ‘Always Look on the Bright Side of Life’ (there are many mutterings of classic lines from the audience throughout the show). The three piece band, led by Musical Director Dean McDermott, nails all the very tricky entrances and timings to perfection.

For Python fans, this is a must see, a reminder of the incredible intellect and anarchic humour that was so seminal. For anyone who’s been living at the bottom of a lake and missed it all, it’s a visually spectacular, full on, vegas-meets-pantomime show  which is genuinely laugh out loud funny. For ‘Tonight’s the night when all my knights unite ….’ Take up your sword and shield and head down to Derby Theatre for a full-on attack on the senses.

This production is produced by the award winning Selladoor Productions and Mercury Theatre Colchester.