At last, we can discover that indeed – it does. Croft’s theatrical roots, his solid trunk of work and the beauty of his theatrical blossomings over the years leave us with ‘what matters’ more than mere metaphor. And what really matters is the very high quality of Giles Croft’s directorial efforts (more than fifty plays) and his 100% commitment to his role as Artistic Director. His The Cherry Orchard adapted by Simon Stephens, is a triumphant theatrical success and fittingly, a play about the sadness of leaving yet retaining much humour and intelligence.

What matters in Chekhov’s penultimate play, and in this modern adaptation, is way that chance affects our lives; the capriciousness of existence one might say. In The Cherry Orchard such seeming insignificances dramatically occur as: an inopportune remark about the weather; an errant stick with which Varya bashes Lopakhin on the head; many social blunders and the comedy/tragedy of humankind writ large on stage. Additionally we discover grief over the death of a child and deep concerns over the fate of a family estate with its famous obsolete cherry orchard as well as varying objectives and idealogies over the need for money to exist. Chekhov called his play a ‘theatre of mood with submerged life in the text’. In its time it was significantly different to more flamboyant theatre offerings. 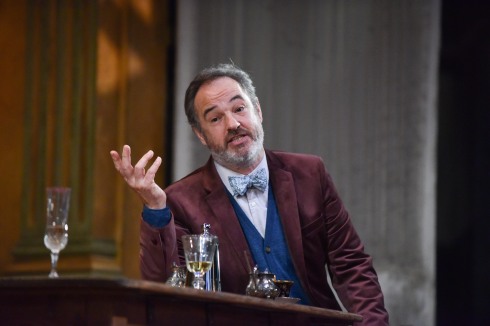 The potential destruction of the beautiful cherry orchard has less to do with the sad removal of something once cherished than the fact that it remaining is blocking progress on many levels. Even the central old lady lives entirely in the past and holds nothing in the present. The play is also about the decline of one era and the unknown onset of another.

There are some excellent main performances in this Nottingham Playhouse production of Simon Stephen’s modern dress and modern language adaptation of The Cherry Orchard. Kenneth Alan Taylor is on top form as the confused, mumbling – lost in another time- man servant Firs; Babirye Bukilwa is enigmatic and still as adopted daughter Varya; light voiced John Elkington is very human and sympathetic as the capitalist agent, Alexander Lopakhin; Robin Kingsland amuses as pool obsessed and socially unsure Leonid Gayev. Sara Stewart is imposing yet vulnerable as the newly returned estate landowner who is a damaged personality and also clueless with money, namely, Madame Lyubov Ranevskaya.

Claire Storey brings alive a great eccentric Russo-Germanic character in her portrayal of Charlotta Ivanovna and it is a pity that the genuinely charismatic Rob Goll is so fleetingly used. He is excellent in both his two roles.

Most authentic of all must be Jamie De Courcey as perpetual student Peter Trofimov. If there is such a description as quietly electric then this surely describes De Courcey’s magnetic performance. His honest courtship of Anya is sublime from both De Courcey and Evlyne Oyedokun as Anya. Out of all the Russians he appears the most Russian and almost from a different time period than that shown in the modern version of the play. Generally the Russians in the play are seen as a full on and expansive race in their affections and extravagant body language but Trofimov’s is quite contained and ultra thoughtful.

Tim Meacock’s set design of faded and vanishing grandeur is terrific as well as the meta – theatre effects in the latter part of the story. Steph Bartle’s lighting creates some stunning atmospheres as does Adam P McCready’s spine tingly good soundscape.

A important niggle would be that the supernumerary cast of dancers at the ball and guests at the ball are not visible (at all) from large proportions of the auditorium outside of the centre. They come as quite a surprise as they enter the stage at the finale for their curtain call. Otherwise this is a very highly recommended play rewarding a rapt press night audience.