The Secret Keeper is written by Angela Clerkin and presented through ClerkinWorks and Ovalhouse. With support from the Arts Council and National Theatre Studio the Curve Leicester Studio welcomes back the creative talents of theatre maker Angela Clerkin.

As promised The Secret Keeper turns out to be an original fairy tale for adults. It does precisely what it says on the enticing package with a burning Doll’s House ablaze at the centre of its gothic poster design. It contains kooky songs, sharper than sharp wit and portrays a powerful modern story about truth, privacy, surveillance and responsibility. For children it is not, for some of the themes are a tad racy and murderous; they too are filled with fiery contemporary references as it courses it’s way through the life of the Doll’s House maker, (Niall Ashdown) his sexually frustrated wife (Anne Odeke) and The Good Daughter (Angela Clerkin). Actor Hazel Maycock brings alive many of the forty plus characters played by the cast. Each character is distinctive and exceptionally well (and often wryly amusingly) acted.

The shadowy and Gothic characters of magpies haunt the piece throughout. The visual aspects of the play borderline Performance Art and we are treated to some magical symbolism throughout that allows us to go deeper into the themes of theft, naughty government cover ups and whistle blowers. Clerkin’s writing and performance as The Good Daughter considers whether there might be limits to a sense of truthfulness/openness just as there are those in personal and national privacy and the notion of exposure. These are fascinating themes deliciously well explored. 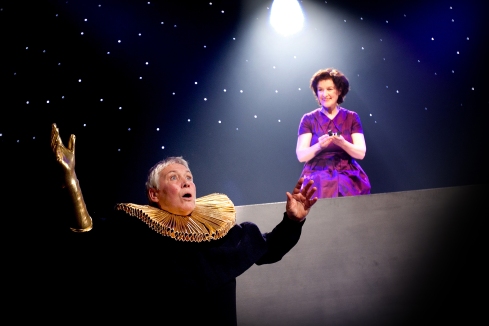 The Secret Keeper is constantly entertaining and ‘stand out’ thought provoking although, with a few sections a tinsy bit over long, but nothing marring the overall connection to the piece. It is co-directed by associate artist Lucy J Skilbeck (most recently associated with the excellent Fringe First winner Joan starring Lucy Jane Parkinson) and the design is by Simon Vincenzi. The Secret Keeper music is by Nick Powell and the magical lighting is by Colin Grenfall. There becomes a great sense of anticipation when waiting to see if the shared ‘secret’ will release the guilty from their guilt and the starry lighting becoming illuminated (or not) is really quite magical to witness. Angela Clerkin herself is an Associate Artist with Improbable and Chris Goode & Co.

PS: This particular reviewer is especially delighted to see Angela Clerkin still creating and acting as he once worked alongside her in Christina Reid’s play of Les Misérables (early 1990s) when he was a Nottingham Trent Uni second year Performance Art student and Les Mis supernumerary at Nottingham Playhouse during Pip Broughton’s reign there.