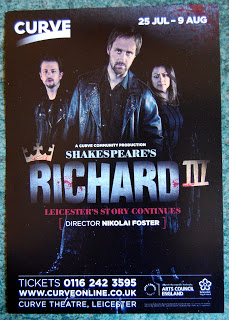 In the Leicester Curve studio space an eager audience enters and seats itself for the annual community theatre event. This year it is Shakespeare’s Richard III directed by professional director Nikolai Foster, an apt choice given the recent internment of the actual King Richard’s bones in Leicester cathedral. This community theatre play is comprised of non- professional actors of all ages, ethnic backgrounds and sexes and their production of Richard III is better than a handful of professional versions this reviewer has seen over the recent years.
The playing space is traverse and most of the action takes place on a raised area of faux black marble. Even before the play has begun the parameter surrounding the playing space is encrusted with the thick grey dust and debris of war. The set design is created by Matthew Wright with lighting and sound by James Whiteside and Thomas Preston respectively.

Abandoned shoes and boots litter the area and denote the grisly remains of the victims of warfare. A long heavy chain handing from the ceiling ends with a hook and on the hook hangs a knee length leather coat. In the air electricity crackles almost as if human flies are frying in an invisible fly catcher. The coming danger is palpable.

Richard III needs a very compelling Richard to carry the piece. It is huge challenge for any actor in a monster of a play of containing 3718 lines and Mark Peachey’s plain speaking Richard nails it from his first ‘Now…’ His performance is subtle stage craft personified, full of guile and smiling charm, his personality greased with cunning and malevolent intent, theatrical but never bordering on the camp. This is a manly Richard for a modern age, despotic, determined, hypnotic and we get to see his crippled back!

Luke Oliver makes an almost brotherly companion to Richard as a conniving Buckingham and their scenes together are some of the most compelling of the play. 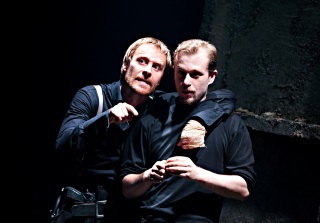 The entire cast is embodied by a total of thirty-one actors and through Nikolai Foster’s directorial guidance their passion for this work shines through and their commitment to the energy and tone of the play is exemplary. The scenes of brutal violence are done with precision and sound effects of gun shots coupled with clever lighting make the human dispatches so much more effective than relying on a prop gun that might not fire and thus ruin the scene. 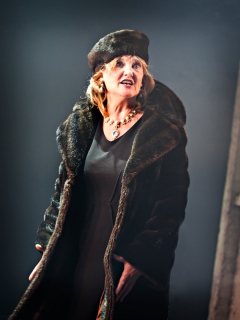 The women in the cast all show strong characters in defiance of Richard of Gloucester and Laila Lee is electric in the wooing scene. Catriona McDonald as Queen Margaret is interestingly positioned in the parameters of the stage as she initially bridles against Richard’s parading swagger and comes into her own powerful self once she moves centre stage. Another subtle performance comes from Becca Cooper as the hired killer Tyrell and vodka swilling mock priest. A fascinating character change was bringing in Emma Dent as Bishop of Ely with a small line change of ‘Lady Bishop’. As this version of the play was set in contemporary Russia with appropriate costuming one wonders whether Russia does indeed have lady bishops. Mistress Shaw was also absent from this production and her staying in bed makes for a tighter scene and keeps the drama intact.

The men and boys in the cast demonstrate strong character portrayals, all of them very diverse, human and believable. Three stand out portrayals come from William Hayes as a sympathetic Duke of Clarence and Dale Goulding as the wheelchair bound ailing but still powerful King Edward IV. Edward Spence shows us a brutal humour as the hired killer William Catesby, loyal to Richard.

In this ultimately professional community production the play retains its social and political relevance warning of democracy being eroded and freedom of speech being prevented. As Nikolai Foster says in his programme notes ‘this production uses little more resources than Shakespeare’s players would have had available to them, trusting the text and the actors to release the significance of the story for a new generation.’ Given the huge final curtain applause from the Leicester Curve studio audience this cast and team have done their job stunningly and Leicestershire should be rightly proud of such superb local talent. Runs until 9th August 2015