The Odyssey at Derby Theatre. Nobody should miss this. It’s totally un-mythable!

The Odyssey at Derby Theatre. Nobody should miss this. It’s totally un-mythable!

This modern production of Homer’s classic tale of a soldier king returning home from war, especially adapted by playwright Mike Kenny for the Derby Theatre stage is a triumph of story-telling, theatre and of mythology mixed with the grim realities of war and their aftermath.

From the moment a giant wave crashes on to the stage leaving Odysseus for dead on a beach and the Olympian gods decide to weave a story around the hero, the play begins a rich tapestry of torturous adventures. We encounter mythical monsters and seductive sirens that haunt brave Odysseus and kill off his men one by one. It is in turns, funny, exciting, clever and wickedly inventive but the inner thread that drives the story forward is the soldiers’ tale. The true eternal story is one of the struggle of soldiers returning home from war, battle weary, inhabited by the terrible things they have seen and have been compelled to do in battle and how that impacts on their lives as a person back in the civilian world and on others they love. Some of them don’t return. So it was in Homer’s time and so it is still as relevant today, only today we have a name for it – post traumatic stress syndrome.

Wole Sawyerr imbues his complex character Odysseus with a great depth of feeling moving from a leader of men, the brave war hero full of his own grandness and calling himself a slayer of cities. Gradually as the play unfolds we see him become mentally broken by his experiences. As in all Greek tales there is a catharsis and the man finds a way of re-connecting through humility and attempts to rejoin his wife Penelope on his island of Ithaca after twenty years of absence. Sawyerr commands the stage throughout and garners great sympathy in an emotionally and physically challenging role. This is not selfish acting but selfless creativity that allows the whole ensemble of eight actors to support and tell the tale through and around him to great effect. 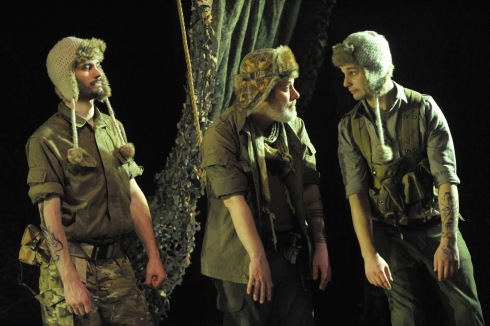 There are some extremely funny moments throughout however, especially around the brilliantly conceived scene in the Cyclops cave, all dark, damp and dangerous echoes and thunderous effects. Christopher Price as Polythemus the Cyclops must be the comic hit of the show as he struts around on stilts greedily eating up Odysseus’ men. He is at once menacing and very funny and even tender towards his hilarious flock of rams. It is a scene which manages to combine real danger and some very funny touches as Odysseus tells the wounded Cyclops that his name is – Nobody. And Nobody did it!

The wonderful set design by Barney George allows for a large creative space to be utilised and to be endlessly creative upon through the actors own rehearsal Odyssey (terrifically sensitive direction by Sarah Brigham) and the inspired new writing of Mike Kenny. As well as the live music, a violin played by actor, composer and sound designer Ivan Stott and drumming, the piece has elements of often haunting song sung by the ensemble and a palate of superb lighting by Tim Skelly.

As an ensemble of eight the company work terrifically as a team and clearly enjoy the very active story telling with men and women morphing seamlessly from human to monster, from siren to animal. They sing and carouse, they fight and succumb to the whims of fate, of exhaustion by war and the fickle gods determinations. Each actor plays a variety of parts in a show of two decidedly different halves. The story of Odysseus’ attempts to return home after ten years away fighting the Trojan wars and the mythology of the Odyssey forms the first half. The second half is how, on arriving back on his island, yet another ten years further on, the troubled and broken soldier king attempts to win back his wife Penelope and son Telemachus and destroy the evil suitors led by the brutal and constantly besieging Eurymachus (Christopher Price).

In this production acting versatility is the name of the game. Emma Beattie comes into her own as she portrays the hardened and determined wife Penelope struggling to control the ungracious suitors with her son Telemachus, (Rich Dolphin). Dolphin’s portrayal is played with a finely acted, and very believable inner frustration building into manhood as he joins forces with his father.

Ella Vale particularly impresses as the beguiling enchantress Circe who, with a twist of her hand, turns men into pigs! Vale also portrays the devious plotting palace maid Melantho, and is especially chilling in her final scene under the control of Telemachus – her face is pure terror. Anna Westlake is deeply moving in her seductive singing as the siren and as the old woman Eurekleia who recognises Odysseus and grieves piteously for the slain suitors.
Ivan Stott is the most versatile of all, giving each role a distinct inner and outer life of its own often with great subtlety when he is one of the suitors rejected by Penelope and equally in his portrayal as the kind old Eumaeus. keeper of pigs and loyal to Odysseus’ memory. His superb musical score brings a whole new depth to the play. 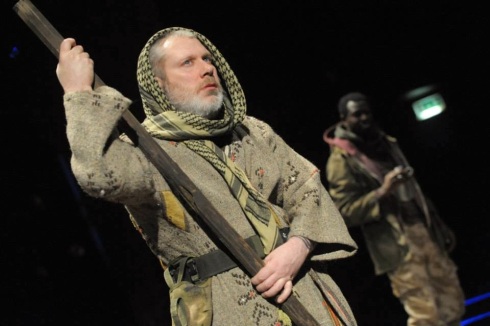 It is good to see that the Derby Theatre are pro-actively engaging local talent such as Adam Horvath, an ex Derby Shakespeare actor now professionally engaged in this totally un-mythable production of The Odyssey through the Brian Weaver Fellowship.