“Dear Diary, just like the proverbial buses, reviewers, like myself, sometimes get three press nights all coming on the same night or see none at all. That’s how it was on the 17th March. So I gathered my intellectual and poetic thoughts together and went over to Leicester Curve on the 19th instead. I had arranged to see The Secret Diary of Adrian Mole aged thirteen and three quarters – the musical. I was very glad I did. It was dead good. I think even that bully Barry Kent would’ve liked it too. I know Pandora would. Got to go. Review to write. Phil Lowe, aged fifty-nine and a quarter.”

Five stars for an all star production!

The Curve production of Sue Townsend’s story of adolescent trails and tribulations (The Secret Diary of Adrian Mole aged thirteen and three quarters) turned musical by Jake Brunger and Pippa Cleary and directed by Luke Sheppard is a wonderfully entertaining, funny and touching night out at the theatre.

It hits all the right spots in portraying the life of the tender and wacky youth Adrian Mole, played by the very talented Lewis Andrews in tonight’s show. It is no mean feat carrying a musical as the lead. Even for a seasoned adult performer you need bundles of talent, experience, energy and nerve and this young performer really nailed it as the gauche and socially confused lad obsessed with his observations of the adults around him and his love of the adorable Pandora. Andrews is a natural performer and conveyed all aspects of Mole’s character to a tee. He could have walked straight out of the original book. Huge pimple and all.

There are four young actors who play Adrian throughout the run (until April 4th) and three young women who portray the object of Adrian’s passion, Pandora. Tonight it is the turn of Elise Bugeja and she puts in an accomplished performance dazzling Adrian and the other boys on stage with Pandora’s mix of confidence, sweet schoolgirl charm and posh girl understated sexiness. Adrian’s cheeky mate Nigel (George Barnden in fine form) may initially get the girl Pandora over Adrian but he is hilarious in his teenage despair when it turns out she prefers Adrian after all. The audience really seem to like Barnden as Nigel and his dancing and facial glee occasionally reminds me of the character Michael in Billy Elliot. There is an obvious sense of huge enjoyment in what he is doing and in him going all out to do it. 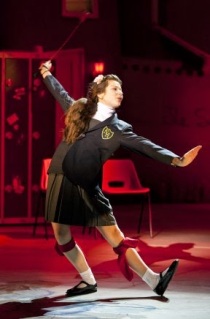 The show itself zips along at tremendous and colourful pace. Slamming doors punctuate the action on a fabulous set of cartoon style houses with pencils and pens for chimneys and back walls made out of pages of the Secret Diary made large. The original musical numbers are very professional with a good blend of fun songs, lively song and dance numbers and very tender songs about loss of love, regret and hopes for change. I especially liked ‘I miss our life’ sung by Adrian’s estranged mum and dad Pauline and George (Kirsty Hoiles and Neil Ditt).

All of the cast play multiple roles (except Adrian Mole) to many laughs from the audience and they help the show retain its slickness by moving on set pieces and props. The adults in the show seem to have great fun playing the children at the Neil Armstrong Comprehensive school too.

This whole show is just a fun packed musical that should appeal to families and diarists alike. I would love to see it transfer to the West End some day. It is that good. Sue Townsend would have been delighted with it.