By the bright and bouncing finale of Leicester Curve’s revived and renewed ‘classy, hip and energetic’ production of Grease the Musical; Nikolai Foster’s terrifically directed show, freshly choreographed by Arlene Phillips, is undeniably the ‘one that the audience wants’. 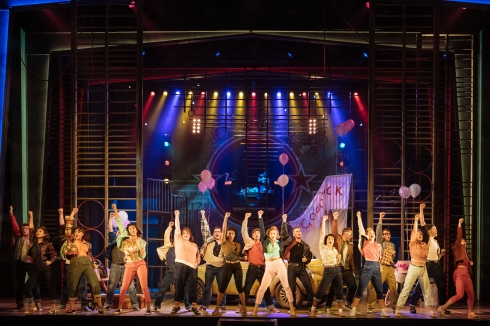 Jim Jacobs and Warren Casey’s musical homage to the birth of the newly Rock & Rolling American teenager shows no sign of letting up in popularity. Director Nikolai Foster brings this multifaceted production once again to the vast main stage at Leicester’s favourite theatre space. Back in 2016-17 Curve audiences enjoyed Grease as their Christmas extravaganza. That sell out production was very good but this production’s ensemble really seem to have hit the mark with a unified and buzzing 1950s cast family feel to the piece. Additionally, in this version, the changes within the narrative structure and songs subvert the audience’s expectations allowing the piece to be familiar yet newly compelling. The boy gang name T Birds is gone in this piece and replaced with the Burger Palace Boys. Also gone from the previous 2016/17 production are the songs It’s Raining On Prom Night and the Miss Lynch solo, In My Day.

Nikolai Foster’s new production of Grease has a dramatic honesty running through it that offers many elements of stark reality to what could just be presented as a sloppy bubble gum USA love story with catchy tunes. Of course, we still have the classic story of a broken romance made good in Danny Zuko (Dan Partridge) and Sandy Dumbrowski (Martha Kirby) but, in this revived production, we also get a real sense of the 1950s. It is particularly great to see and hear Darren Bennett return as the self loving conceited DJ Vince Fontaine. Tonight’s audience get the double pleasure of seeing Bennett also croon as Teen Angel. And… eagle eyed audience members may recognise him as Officer Jacobs too! As out of sorts lovers Danny Zuko and, a no longer trad blonde, Sandy Dumbrowski offer up tender and believable performances. Both are vocally very strong and eloquent in their teenage frustrations and romantic yearnings. As Danny Zuko, Dan Partridge is both athletic in his body language and in his dancing and has plenty of gauche charm in the role. 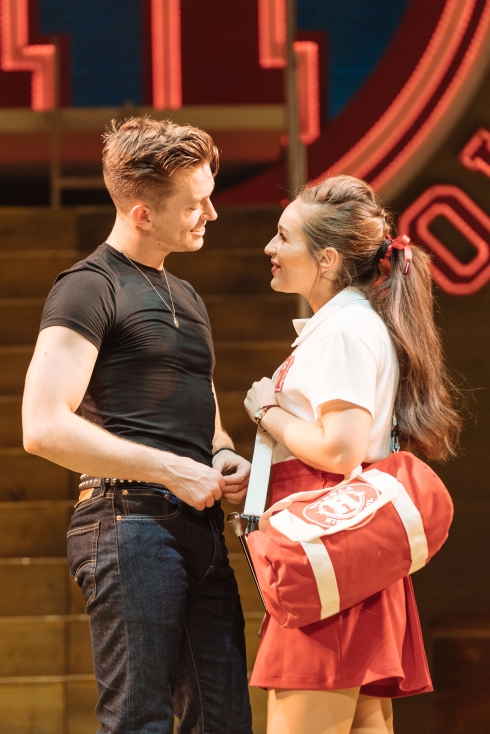 Martha Kirby takes her Sandy and runs with her. She gives us much more than the simple notion of a shy teenage girl rebuffed. There are elements of less naivety in this Sandy and Kirby shows her character with more backbone and firm opinions of her own. Her transformation scene in the second act is sensationally assured and overall both leads are of unbeatable quality. 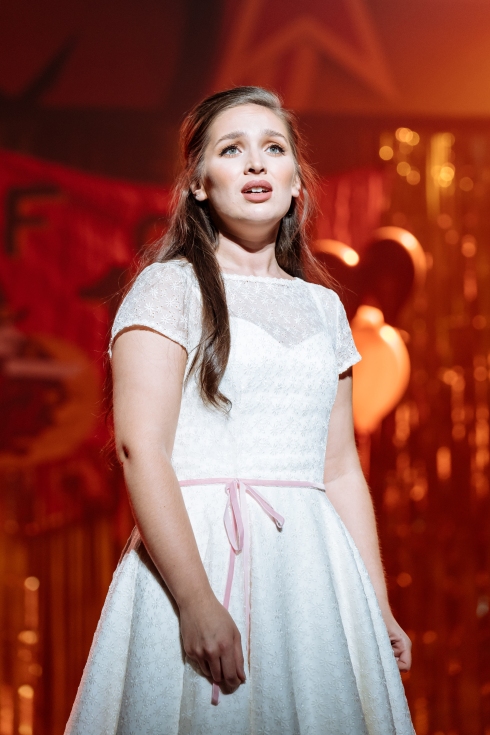 The production as a whole is zinging with energy. Choreographer Arlene Phillips offers up much to enjoy in inventive dance pizazz. The choreographic elements of the show grow organically from the action and story and, in the thrilling second half, there is some vibrant hand jiving to die for. The ‘electrifyin’ dance sections (of which there are many) are especially authentic and this keenly talented young cast excel in their execution. 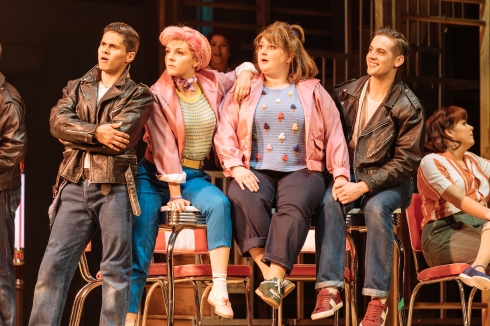 Other sparkling performances are given by an earthy and sexy Rhianne-Louise McCaulsky as Betty Rizzo and Louis Grant is strong as a tough teenager with a heart, Kenicke. A very sweet Eloise Davies charms as Frenchy the ambitious wannabe beauty parlour assistant. We particularly like the kooky romance of Jan (Natalie Woods) and Roger (Ryan Anderson). Anderson’s Mooning song is beautifully sung and one of the sung highlights of this production. As Rydell High tutor Miss Lynch Corinna Powlesland makes a moving speech about her character’s own teenage years. The teenage boys rough and tumble mock fighting packs a punch and we love Damian Buhagiar’s fun and feisty Sonny Latieri. Of course, all the favourite Grease the Musical songs are here on stage and appreciated by this capacity audience on press night. The show opens with Grease Is The Word and Summer Nights and along the way the musical amuses with Freddy My Love then cranks up the pace with Greased Lightening and finishes the first half with the very catchy We Go Together. Act two goes dance crazy and, before you know it, the audience are ecstatic for You’re The One That I Want and the finale reprise of We Go Together. Adding much to the atmosphere of Curve’s Grease the Musical is stage designer Colin Richmond’s totally inventive set design visually echoing a school gymnasium. Brand new for this show, Douglas O’Donnell’s projections really add some extra visual bite to the piece and we love the sight of the sound waves spreading out from Vince Fontaine’s central DJ sound booth. The show boasts superb lighting effects by lighting designer Guy Hoare. The musical directorship is in the über confident hands of orchestrator and musical supervisor Sarah Travis and musical director Neil McDonald. The spot on sound design is courtesy of Tom Moore. No BS, Grease the Musical at Curve is the word! It’s got groove. It’s got meaning! 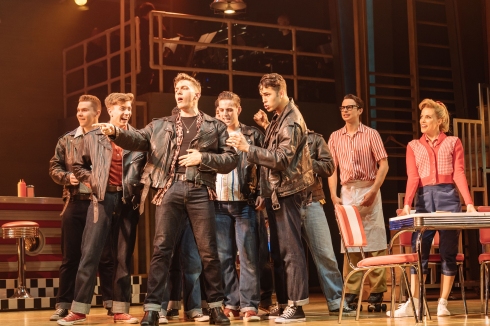 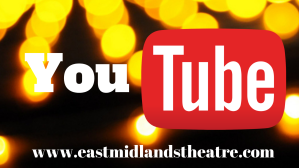