Marie Jones’ short and revised, two act play, Stones In His Pockets comes to the Nottingham Theatre Royal stage 22nd to 27th July. The story, using only two actors, is full of hope to amuse and aims to expose a corrupt and uncaring Hollywood film making company against the enthusiasms and guiles of a group of Irish extras. There is greed, humiliation and exploitation on both sides and some dark humour in-between. 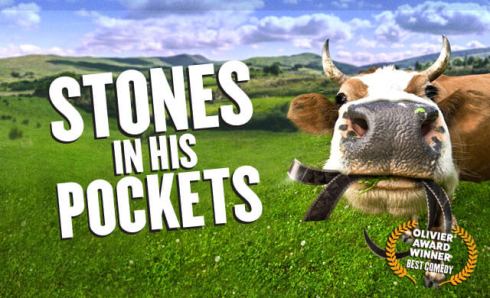 Set in picturesque rural Ireland we discover Jake (Owen Sharpe) and Charlie (Kevin Trainor), two strangers who happen to be on the set as extras and they are run ragged by the film director and Aisling the runner and suffer exploitation by the main glamorous and seductive leading lady. Sharpe and Trainor play fifteen characters between them and the action is fast paced throughout. Many of the characters are of Irish descent and excellently played with a strong mix of larger than life and subtler strokes. Trainor and Sharpe give the piece plenty of energy, humour and admirable variety. 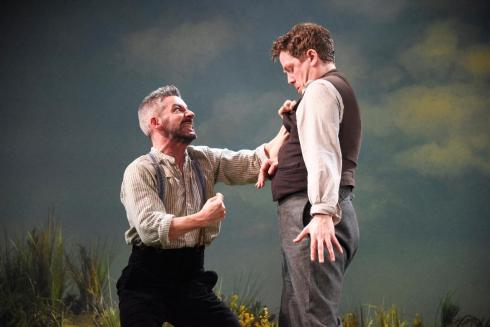 The characters appear rapid fire, often at the twist and turn of the actor or the morphing into a new personality. This is a wryly amusing play but one in which, especially in the first half, you really need to have your wits keenly sharpened and ears turned up to full clarity setting otherwise it is easily possible to lose the plot due to the collision of comical characters. The second half of the writing is clearer and therefore the action directed by Lindsay Posner. After the break we have now got ourselves attuned to the mash up of recognisable characters. Even so the poignant subplot of the death by suicide of one of the young extras gets a little lost in the quick paced multi-charactered dialogue.

Stone In His Pockets is one of those plays that packs so much into a short playing time that one feels another viewing with fresh ears might bring some renewed clarity to everything that is happening on stage. But, alas that isn’t always possible. So ‘Check the gate please. And its a wrap’.