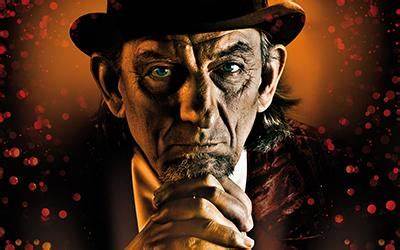 Derby Theatre are looking for young people aged 9-16 to be in their big main house festive production for Christmas 2019, Neil Duffield’s stunning adaptation of A Christmas Carol by Charles Dickens.

On Saturday 17 August, group auditions will be held for young people who are interested in appearing in the production, which will run in the Main House at Derby Theatre from Friday 29 November until Saturday 4 January.

Auditions will be held in groups, with time slots from 10am and each session will last for one hour. Young people will take part in a range of drama exercises and games and be asked to sing in a group. Please wear comfortable clothes and footwear and bring along a bottle of water for refreshment. Previous experience in performing is not essential.

We are looking for three teams of six young actors, aged between 9 and 16 to play a range of roles. Each team will perform on different dates during the run.

Following the auditions, those successfully selected will be asked to work for on an introductory rehearsal on a Saturday with Director, Oliver O’ Shea. The main rehearsals, with the professional company of actors, will then start week commencing Monday 28 October and each team of young actors will be required to rehearse three times a week (Mondays and Thursdays from 6pm until 8pm and Saturdays from 10am until 1pm).

Additional rehearsals may take place as the production nears to opening. The production will open on Friday 29 November and run until Saturday 4 January.

A Christmas Carol will be directed by Oliver O’ Shea from the original production directed by Sarah Brigham.

(Director of A Christmas Carol, Oliver O’ Shea) said: “I am thrilled to be directing A Christmas Carol for Derby Theatre this year, from the original production directed by Sarah Brigham in 2014. Offering young people from the local area the chance to perform alongside an adult company of professional actors is an exciting opportunity and I am really looking forward to meeting young people from the region who will audition to be in the production this year. A Christmas Carol is a firm favourite with family audiences at Christmas and the Young Company being part of the cast is an integral part of the show. We will be keen to see young people who have enthusiasm, who are great team players, and who are committed to the project.”

How to book an audition slot

– Auditions will be held on Saturday 17 August from 10am. – Application forms will be available to download from the Derby Theatre website from 10am on Friday 26 July at www.derbytheatre.co.uk. – Completed application forms to be emailed to Shannon David, Production Assistant at: s.david@derby.ac.uk no later than 5pm on Monday 12 August. Please write: A CHRISTMAS CAROL YOUNG PEOPLE AUDITIONS in the subject line of your email. – Audition slots will be offered on a first-come-first-served basis, offered in the order Shannon receives completed forms. If space is available, applicants will automatically be offered one of the time slots. We may be able to offer specific time slots, according to preference, but this cannot be guaranteed. – Shannon will acknowledge receipt of all application forms and if you are successful in acquiring an audition slot, Shannon will email to confirm which time slot you have been allocated.

For any questions you may have once you have received the additional information please email Shannon David at: s.david@derby.ac.uk.

– Auditions are only being held on Saturday 17 August. – For those wishing to audition, who are at the younger and older ends of the scale (i.e. not yet 9 or still 16), as long as you are 9 by the time rehearsals start (on Monday 28 October), or are still 16 by Saturday 4 January, you are still ok to audition.

More about A Christmas Carol

On Christmas Eve, the cruel humbug Ebenezer Scrooge is visited by the ghost of his old business partner, Jacob Marley, to warn him to change his miserly ways. After midnight, three spirits guide Scrooge to journey through his Christmas past, present and future, to reveal the errors of his cold heart.

Along the way, he encounters the mistletoe and merriment of Mr Fezziwig’s dancing party, Tiny Tim’s generous Christmas spirit and the true consequences of his meanness and misery.

Made in Derby and performed by a talented ensemble cast, this much-loved festive story will be a heart-warming experience for all the family this Christmas.