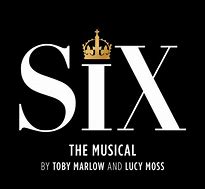 Nominated for five 2019 Olivier Awards, including Best New Musical, Best Choreography and Best Costume Design, the West End smash hit SIX, written by Toby Marlow and Lucy Moss, today announces its plans for a nine-month Royal Tour visiting theatres across the Queendom. Opening at the Yvonne Arnaud Theatre, Guildford on Thursday 24 October 2019, SIX will visit over 33 venues nationwide, including a Christmas season at The Lowry Quays Theatre from Tuesday 3 December 2019 to Sunday 5 January 2020. The cast, yet to be announced, are backed by the show’s all female band, The Ladies in Waiting. ★★★★★ ‘THE MOST UPLIFTING NEW BRITISH MUSICAL I HAVE EVER HAD THE PRIVILEGE TO WATCH’ The Evening Standard

From Tudor queens to pop princesses, SIX sees the six wives of Henry VIII take to the mic to tell their own personal tales, remixing five hundred years of historical heartbreak into a 75-minute celebration of 21st century girl power. The songs from the show have proved to be a chart storming sensation with weekly streams totalling more than 1.5million. These Queens may have green sleeves, but their lipstick is rebellious red. Think you know the rhyme, think again… Divorced. Beheaded. LIVE!

SIX is the phenomenon everyone’s losing their head over. The show’s 2018 debut at the Edinburgh Festival Fringe hastened its West End transfer which opened in January 2019. The production is currently enjoying an open-ended run at the Arts Theatre playing to sold out houses. And now the Queens are going global. Tonight sees the North American premiere of SIX at the Chicago Shakespeare Theatre, where it runs until 30 June 2019. Meanwhile, further international voyages are in discussion for Canada, Japan, Australia and South Korea.

“We are SOOOO excited and thrilled and grateful that we get to share the story of these badass Queens – and the UNREAL talents of these women – with so many more people all over the UK! We’ll see you there!!! WOOOOOOOO!!!”

WINNER! BEST ENSEMBLE IN A PLAY OR MUSICAL The BroadwayWorld Awards 2018

WINNER! MUSICAL OF THE YEAR The Spy in the Stalls Awards 2018

On Sale to Premium Royal Members* Thursday 4 July 9am, Friday 5 July 9am, On General Sale Monday 8 July 9am