Avenue Q is your typical boy-meets-girl show, with cute musical numbers, and you should definitely book tickets for all your kids – wait, what?? NO, no it’s NOT!! (It’s those Bad Idea Bears, get out of here guys …..)

Princeton, our graduate hero, is looking for his ‘purpose’, and moves into Avenue Q, down to the town because uptown is too uppity. With a freshly minted BA in English, he is full of hopes and dreams … which rapidly turn to dust. He finds an apartment to rent, from Gary Coleman (yes, that one), with neighbours including a Japanese therapist called Christmas Eve, and Brian, a failed Jewish comedian. He meets Kate, the kindergarten teacher monster-next-door, and Rod, an uptight investment banker, with his unlikely flatmate Nicky, a virtually horizontal laid back slacker. All making sense now, huh?

Avenue Q was first performed in 2003 and is still fresh and original, taking an honest look at the real world dilemmas of growing up, when you realise that the sheltered world of college hasn’t quite prepared you for everyday adulthood. It’s riotous and funny and dares to say things that many would shrink from. Yet it gets away with it, because it’s mostly puppets saying these things. Think of Kermit and Miss Piggy, of Sesame Street, and how those puppets take on human characteristics, and you get the idea. The real skill here is in the human performers, who are not only operating the puppets and performing the songs but do so with such expression that the audience focuses on the puppets and not the humans. The puppets themselves are colourful and cartoon-like, larger than life, and with a few hand gestures or a flick of the head, communicate all that is required. The actors are all in stage blacks, so their bodies fade into the background, though their facial expressions still follow the puppet characters. 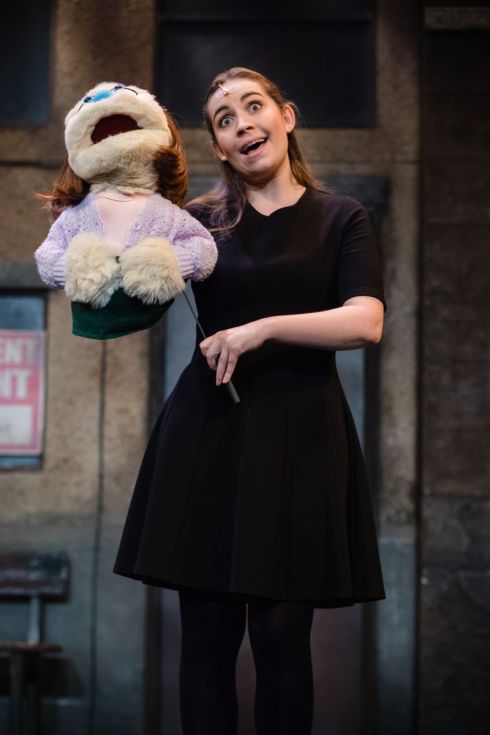 With songs such as ‘If You Were Gay’, ‘Everyone’s a Little Bit Racist’ and ‘Schadenfeude’, Avenue Q is certainly not treading a traditional path. The music and lyrics by Robert Lopez and Jeff Marx are unique, catchy, and full of punchy, sometimes breath-taking, hutzpah! They address issues that make people uncomfortable, that we all struggle with, and they do it openly and honestly, so after the gasp of disbelief that they ‘went there’, there is also the relief of laughter in recognising our own embarrassment and confusion.

The 11 strong cast put in an energetic, non-stop performance, with several cast members performing 2 or more puppet characters. Some of the puppets are two-handed (or headed, in human terms) and this requires incredible spatial awareness and co-ordination of movement to make it seamless. Tom Steedon and Megan Armstrong as Nicky are particularly skilled at this, with very physical, almost balletic moves. Cecily Redman plays both Kate Monster and Lucy the Slut – and in a few scenes, both at the same time! She gives a virtuoso performance of switching tone of voice and attitude, though it is occasionally a little distracting trying to keep track of who’s who! Likewise Princeton doubles up with Rod via Lawrence Smith, a performer with a wonderfully warm singing voice. His neurotic Rod is super, right down to his barely repressed anger. Trekkie Monster, a reclusive internet surfer of dubious renown, has a sort of naïve charm, which is rather at odds with his hobby of choice.

Through all their struggles, friendships and break ups, we come to care about this crazy community on Avenue Q and there are some genuinely touching moments in amongst the madness. With lyrical songs such as ‘A Fine, Fine Line’ and ‘I Wish I Could Go Back to College’, the show has a good deal of melody to enjoy, alongside the humour. The six strong band, under the direction of Dean McDermott produce a full and dynamic sound.

If you want a belly laugh and are not easily offended, Avenue Q is the place to be. And who knows, you might even find your purpose.