It proves an interesting choice for the Fourblokes theatre company; that of taking on Mark Healy’s complex adaptation of Thomas Hardy’s popular novel Far From The Madding Crowd. It’s central focus is on Bathsheba Everdene, the spirited mistress of a large inherited farm in the late 1870s. Historically this would have been a time when a female owner would have been a rarity and the ownership and management thereof, one that would have attracted much more attention and criticism than if it were under the operation of a male. 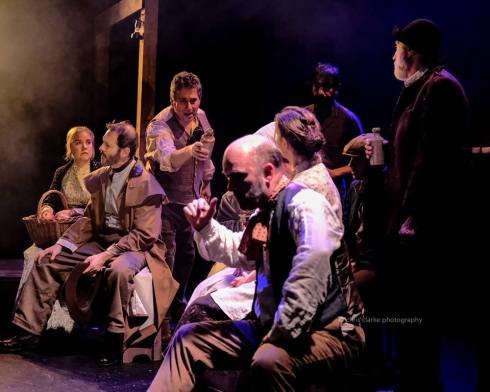 Throughout the story Bathsheba is courted and matrimonially pursued by three men, Gabriel Oak, Sergeant Frank Troy; both of a similar age to her and an older gentleman farmer and landowner, William Boldwood. The route to a happy marriage is not an easy one for proud Bathsheba even though Hardy has her state that ‘all women should be married’. Right and wrong choices are made all through the ever weaving tale and running a large farming estate has its fair share of economic and human tragedies.

Madding means ‘frenzied’ and Hardy’s consideration of the agricultural and rural world, in his time, was one that strongly rejected the industrial revolution. His ideal world was in preference to lives being led in old style traditional farming ways – ways that were grounded and could be trusted. One of his projects as a writer was to create accounts of lives in his fictional ‘Wessex’ as it once had been. Not necessarily over romanticised lives, but ones that could be identified and sympathised with by his readership but, still give an account of lives entailing true drama. Novels of this period were often very wordy and intensely descriptive – a style that suited the times in a world where community was strongly valued and movement of peoples away from their home town or village was much rarer than today but were changing due to the industrial revolution and factory working. Uncertainty in life was the central theme and the central motivation for change albeit modifications often dangerously motivated. 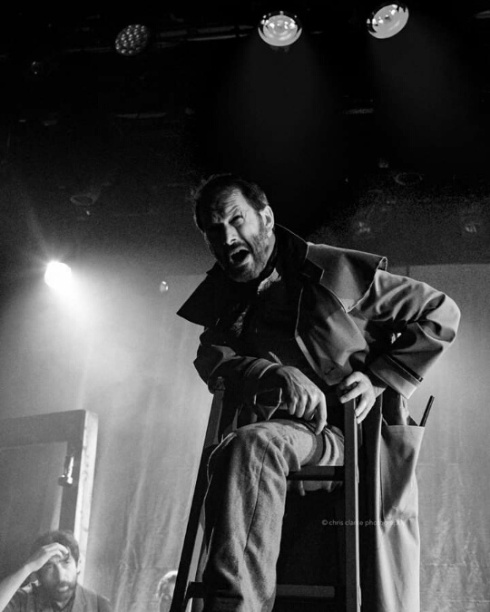 Rituals and the dialect of England’s southern counties were vastly important to Hardy and these have been cleverly woven into the stage adaptation by Mark Healy and the presentation by the Fourblokes company. The key essence of showing us a strong community on stage through good ensemble work is largely what makes this production the success it is. Saying that, Healy’s script is nearly three hours long (inc interval) in playing and could have benefited from some dramaturgical clipping before being published. 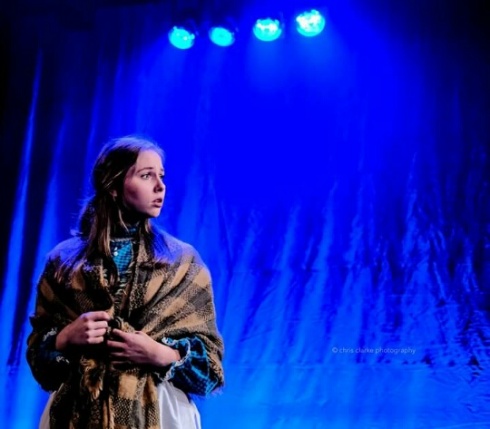 In the Fourblokes production, attentively and keenly directed by Barry Taylor, the whole ensemble use the strict limitations of the small Derby Guildhall stage well. The set is suggestive of many rural locations and distinct levelling gives us a variety of focus to concentrate on and allow the creative imagination to place the happenings in the unfolding story.

Good lighting and some key sound effects convince us of barn fires and even sheep going over a cliff to their deaths. The sheep shearing scene works particularly well and is given plenty of sweaty heft by the committed cast. The fire at the barn is handled with gusto and great energy by this cast. A large white backcloth covers the back of the stage and to help us understand the various locations it would have been nice to see some projection work to give extra colour and dramatic styling.

Particularly enjoyable are the Malthouse scenes where the farm labourers and their wives gather to drink and socialise and contemplate the amorous and business goings on of Bethsheba (Emily Marshall-Sims).

A cross current of folk song, musicianship, creative stage movement and some excellently nuanced smaller parts save this play from drowning in a sea of words – which it threatens to do at points. The old adage about their being no small parts just small actors proves especially true in this presentation and the skills of the ensemble add much that is laudable and make the whole dramatically strong.

The central performances concerning Bathsheba (Emily Marshall – Sims), Gabriel Oak ((Toby Bradford), Farmer William Boldwood (Adam Guest) and Sergeant Frank Troy (Joshua Sly) are all portrayed with a sense of real ownership and solidly grounded realism. We care about their hopes, their lives, their follies and their journeys. All of their strengths and frailties are brilliantly achieved by these near professional standard performers. 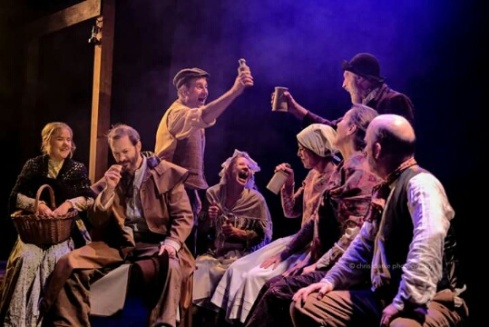 This may be a small stage and a small company of actors portraying an impossibly big story but they do it with the biggest of hearts and the most generous of souls. It is an audience’s privilege to be let into the dramatic lives of this creative staging of Hardy’s story through the solid production standards and totally committed Fourblokes cast.