“I told you nobody’d like olives Laurence.” says Abigail’s Party lead character Beverly to her put down husband. To which he caustically retorts, “Not nobody Beverly: I like olives. And that’s twenty-five per cent of the assembled company.”  Encompassing such cleverly written lines throughout Abigail’s Party, Mike Leigh’s comically tragic masterpiece, we recognise mid 1970s semi-affluent suburban social pretensions going horribly wrong. The fact that we still laugh at the play is not a scoffing hark back to lesser cultural times, but the fact that all the bickering and one-upmanship we witness on the Derby Theatre stage in Abigail’s Party, still happens in society forty years on. Ironically, even the bad taste orange and brown furnishings have regained a strange kind of ‘must have’ currency amongst the collectors of vintage ephemera.

If no single actor walked on to the set to act, the vintage lovers would feel very at home living on designer Lee Newby’s 1970s style finely observed period set – even if it does lack a television. Shock horror!

But, as the house lights dim and come up again – in sways the hostess Beverly. Melanie Gutteridge plays dreadfully shallow Beverly to perfection. Initially she looks drop dead gorgeous in her floral design dress showing off her styled up blonde hair that hangs seductively above her exposed shoulders and back. All alone, Beverly dances confidently around the living room, busying herself by arranging little touches for her small party to meet the neighbours and playing her favourite music. Then, her overworked estate agent husband Laurence Moss (Christopher Staines) comes home stressed and starts making business calls instead of getting ready to meet his guests, the neighbours. The barely hemmed in martial vitriol subtly begins to manifest itself between man and wife. 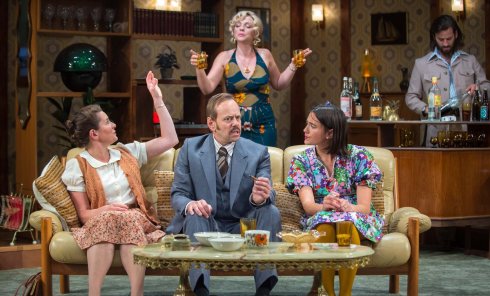 At this point the true voice of Beverly is heard – at times seductive – at times irritated and at times rising to a higher pitch. Much later in the play she is reduced to screaming at her husband. The beast of the beauty is revealed through that voice with it’s Romford suburban twang. Gutteridge simply commands the stage with her often misplaced sexuality and superficial cosmetic vibrancy. She is also extremely funny in her attempts to appear aspirational whilst offering out the nibbles and the ‘little cheesy pineapple ones’ !

Amy Downham brilliantly portrays gauche party guest and nurse neighbour Angela. Her character borders on Bacardi gulping vacuous and she is very amusing with it. The drunker she gets the more excitable and loud she gets. Angela’s bad taste line about her love of pilchard curry gets one of the biggest laughs of the evening.

Liam Bergin is spectacularly insular in his beautifully studied role as Tony – a fit and hirsute man with so little to say that it is a mild shock when he comes out with even a short speech. Downham and Bergin work very well as a couple invited into this party from hell. They are at their best in the embarrassments caused by Beverly’s bullying insistence that everyone get up to dance intimately in her living room.

Not even Beverly’s stressed out estate agent husband Laurence, can save this hellish social disaster from sliding into the rising proverbial flames. Staines’ Laurence is subtly played as a man on the edge of cracking yet trying to retain his dignity in immensely trying circumstances. Party goer he is not!

Lastly we see Sue, an older neighbour and divorcee, whose teenage daughter Abigail, is having a party. Sue arrives at the Moss’s house on the Belvedere estate with a bottle of red Beaujolais that Beverly whisks off to chill in the fridge – very much to the amusement and gasps of the audience. The frosty neighbour Sue is fabulously underplayed by Susie Emmett as a slightly nervous character and certainly the most sober and less garrulous of the group. Well, that is until constant drinks are continually forced upon her by the unthinking Beverly. Emmett adds vital depth to Sue as the story unfolds and she goes from nervous and stiff to standing her ground whilst all around becomes chaotic. 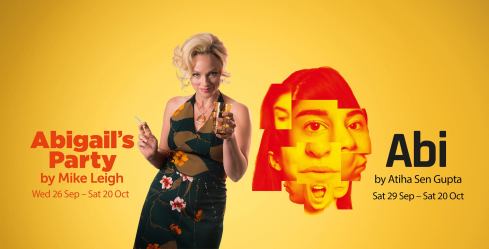 Abigail’s Party, currently at Derby Theatre is one of the funniest and well observed performances this reviewer has seen of this play. Many of the laughs come not just from the wit, drawn from social embarrassments but from the unsaid and the pauses. Leaving my seat after the curtain call I hear another audience member say “That was brilliant. What a finish!” referring to the play’s tragic end. That is the beauty of Mike Leigh’s incredibly revealing dramatic writing that holds a cruel mirror up to our own lives without any kind of emotional reticence.  Highly recommended.

“Pomagne or a nice refreshing Bacardi anyone?”