The Bill Kenwright production of ‘The Case of the Frightened Lady’ at Derby Theatre this week raises one intriguing question: how does the ‘thriller’ format survive, through all the years, the adaptations, the now almost threadworn stereotypes? The answer seems to be that it is its very familiarity which appeals to the audience, a familiarity which does not, in this instance, breed contempt, but is comforting, recognisable and allows just enough escapism without being too challenging.

This latest adaptation by Anthony Lampard of Edgar Wallace’s ‘The Case of the Frightened Lady’ is indeed, a case in point. The storyline is not unusual – at Marks Priory, the aristocratic Lebanon family seeks to secure its future by arranging the marriage of the sole heir to a distant relative. Before this can be achieved however, a murder occurs, and Scotland Yard are called to investigate. And so begins the questioning of the staff, the servants and the household, a varied and motley crew, all of whom seem to have motive and opportunity. So far, so predictable. 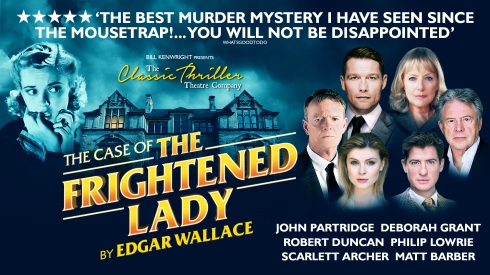 The scene is set in the large hallway of Marks Priory, the ancestral home of Lady Lebanon. This is an impressive static set, with sandstone walls and floor, heraldic shields adorning the walls and the odd bit of armour adding to the effect. There are, necessarily, many exits and entrances, but the setting in a hallway is a clever device to allow the many comings and goings to seem realistic. The attention to detail in the period costumes and the props also lends an air of authenticity and gravitas. And the set is brought to life with the ability of the experienced actors employed.

John Partridge is the inquisitive Detective Inspector Tanner, clever but not arrogant, reserved but all-seeing. There is a pleasant restraint in his portrayal which allows the audience to make their own observations and contrasts with many of the roles he is perhaps better known for. The indomitable Lady Lebanon controlling the household and most of the action is perfectly rendered by Deborah Grant, with a steely nerve and very credible force of character. The heir, William Lebanon, seems a playboy oblivious to his duties and Matt Barber’s portrayal allows some comedic relief to the dark storyline. Rosie Thomson as Mrs Tilling the housekeeper gives a very natural and engaging performance.

There are, inevitably, many twists and turns to this complex thriller but it is perhaps because it is set within a family home, that it seems more compelling than other thrillers which assemble a guest list of apparent strangers. It is perhaps this intimacy of setting that makes it stand out, for what darker secrets are there than those compelled to be kept to maintain the family status quo? Edgar Wallace is credited with inventing the modern thriller, and it would appear that the thriller format is still alive and well today, and entertaining audiences when skilfully presented.

The Case of The Frightened Lady runs until Saturday 22nd Sept at Derby Theatre.