Flashdance the Musical bursts onto the Nottingham Theatre Royal stage in a torrent of energy, which literally doesn’t stop. Joanne Clifton is phenomenal in the role of Alex, which Jennifer Beals made famous in the 1983 film. The welder by day, dancer by night role is a fairly unique one, demanding skill in virtually every dance style, and Clifton slays every one. She delivers a big vocal performance and confident acting and there is no doubt who is the leading lady on the stage.

The standard of the dancing throughout is top class, with challenging choreography which involves ballet, jazz, contemporary, hip-hop and something uniquely ‘flashdancy’! The ensemble numbers are stylish and action-packed, giving an opportunity for individuals to show their talents. The athleticism and skill of the dancers is incredible, and it is this that earns the audience’s admiration. ‘I Love Rock & Roll’ performed by Demmileigh Foster as Tess, with the support of the ensemble, is powerful and impressive. ‘Justice’, by the male ensemble, offers more of an insight into the backstory than most of the numbers, and adds a welcome touch of humour.

Ben Adams plays Nick Hurley, the factory boss’s son who is the romantic interest for Alex and also provides a ‘rich boy’ contrast to her working class girl character. Adams is known as one of the members of the band A1, and he demonstrates his admirable singing voice. He also does a very good job of acting; though the role as written, is a fairly simple one. The duet ‘Here & Now’ with Clifton is one of the highlights and they clearly have great on-stage chemistry. 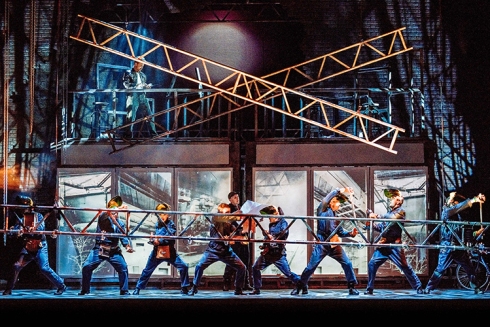 A secondary story-line follows waitress Gloria and would-be stand up comedian Jimmy through their hopes & dreams, and on-off relationship. Hollie-Ann Lowe as Gloria, is another actor with a pin-sharp voice that soars out effortlessly and Colin Kiyani adds a nice lightness of touch to Jimmy.

On this press night, some of the technical aspects of the production seem to fight against the flow of the show a little. The lighting, whilst achieving the right atmosphere for the factory and the nightclub, is a little unrelenting. There is no hint of daylight to lighten the mood. Likewise, the set, with its industrial style metal structure and large sets of steps is dynamic but whether so many changes are necessary is questionable.

In 1983, the film was an unexpected success. Interestingly, it came about  from the writer’s experience of seeing working class girls putting together new, athletic dance forms. Fused with outrageous fashion and music, it created a new style which Hedley called ‘flashdance’. This style was soon taken up by music video producers and became influential in many other 1980s movies, such as Footloose, Purple Rain and Top Gun. This is interesting to note because it goes some way to explaining the triumph of style over substance that this musical has. The storyline is thin and even the characters featured are not really given the chance to fully come to life.

Flashdance is remembered fondly by many and the stage musical does a good job of re-creating some of the most iconic scenes from the film. Clifton and the whole cast give 110% at all times and are the living embodiment of the clamour to ‘dance like you’ve never danced before’. Get your leg-warmers out and live the dream.

Flashdance runs at Nottingham Theatre Royal until Saturday 12th May.