Skip to content
Posted on May 4, 2018May 4, 2018 by philiplowe Posted in dramaTagged Curve Leicester, De Montfort University Leicester, The Crucible

When a lie will save you and the truth condemn you to hang, do you choose the path of conscience or compromise? This is just one of the moral dilemmas in a confounding web of conviction and contradiction faced by the characters in The Crucible. Running at the Curve Theatre, Leicester until Saturday 5th May, this classic Arthur Miller play challenges and provokes questions long after the curtain falls. It is directed by Siobhan Cannon-Brownlie and performed by a company of drama and performing arts students from De Montfort University. 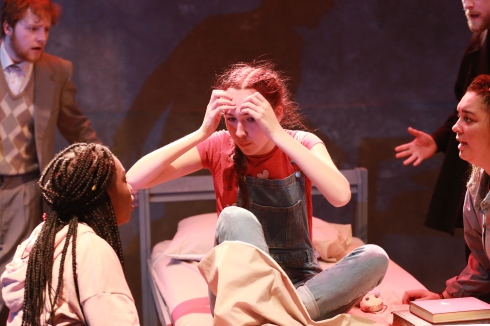 Miller’s play was first performed in 1953 against a background of the McCarthy trials in the USA, where accusations of communist alliances were escalated with scant regard to evidence. The Crucible is set in 1692 and tells the true story of the witch trials in Salem, where suspicion and fear are enough to convict someone as a witch. The parallels are easy to see and, more intriguing, the questions raised about ‘truth’. In today’s age of technology and apparent individual freedom, are we actually any less bound by society’s expectations and rules? 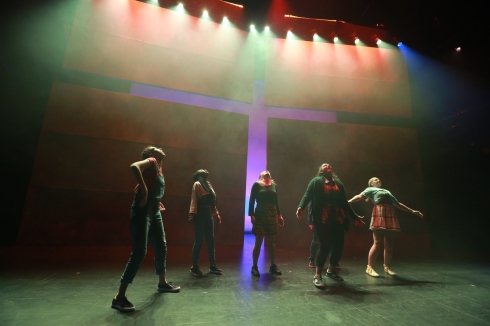 This production opens with immediate impact. A dim stage, misty, and with just the sound of crickets creating an ominous atmosphere. A steady build of throbbing sounds, flickering lights and scattered movement create tension. The opening scene, of the young girls dancing in the forest, is only alluded to in the play but the happening here sets up what is to follow. There is excitement, frenzy, a letting go of inhibitions, a perfectly ‘normal’ letting off of teenage steam. But this is 1692 and this behaviour is not normal. The community in which they live creates a rigid set of rules which must not be broken.

Rev Parris discovers the girls cavorting in the forest, amongst them his own daughter Betty, who immediately falls into unconsciousness. As the community tries to establish exactly what happened that night, concealment and collusion turn to accusation. Abigail, Parris’s niece, begins the spiral of untruth and fear, and recrimination begins and gathers momentum with every word.

Rev Parris is played confidently by Connor McGurl. His personality is a complex mixture of righteous declamation and trembling anxiety. Naana Boaten, portraying Abigail, presents a measured performance, nicely walking the line between convincing victim and clever manipulator. The play really settles into it’s stride with John and Elizabeth Proctor, husband and wife, who are wrestling their own demons. Ransford Boi is John Proctor and has great presence from his first appearance. The scenes with his wife Elizabeth,  (Eleanor Page), are some of the strongest in the show. Page gives a nuanced and persuasive perspective to the wronged wife who believes she has forgiven her husband’s adultery but cannot forget.

The domestic tension between the two is well realised and adds to the ‘modernity’ of the play and its themes. Calum Harris, as Deputy-Governor Danforth, creates a strong character with feeling and conviction, and one whose moral and judgemental conflict can be seen in his eyes and body language alike.

The set design, by Al Parkinson, appears elementary but fulfils multiple roles. Simple flats, arranged to create a ‘cross’, provide an entrance/exit, an aperture for lighting effects and a ‘gallery’ which is used to great effect. Characters are placed in this ‘gallery’. Whether they are supposed to be actually observing the action or just representing the ‘community’ is not clear. But they are certainly disconcerting and slightly threatening, giving a feeling of Big Brother watching. The intermittent soundscape, designed by Tasha Taylor Johnson, adds to the suspense, with rumbling bass notes and rhythmic repetition. The lighting by David Hately is stark but effective in adding ambience.

This production of The Crucible takes risks. It does not follow the traditional route of period costuming. This reviewer feels that the narrative of the play is strong enough to support this decision. The use of the actor’s local accents can be a little distracting, as the language of the play is complex itself. Tuning in to different regional accents within this piece takes some getting used to. However, Siobhan Cannon-Brownlie’s production overall,  is fresh, innovative and engaging, providing signposts to the parallels with today’s society.

It highlights the questions raised by Miller in his original writing of the play, and thus honours its intent and makes it relevant to today’s audience.