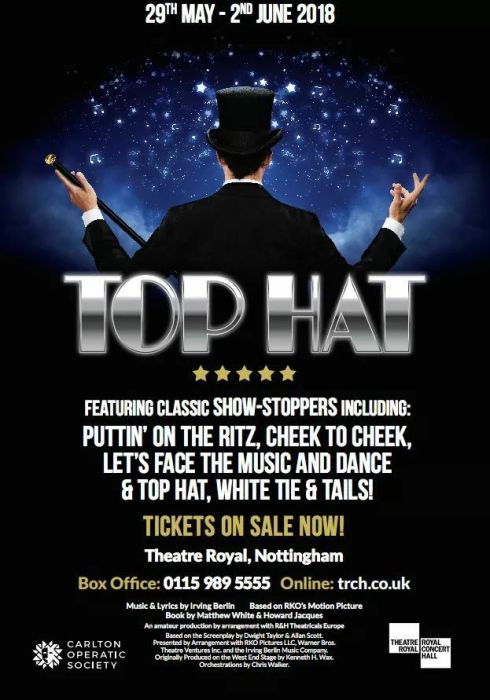 If the energy and hard work being put into rehearsals is anything to go by, Carlton Operatic will have a ‘top hit’ with their production of Top Hat at Nottingham Theatre Royal in a few weeks time. This popular musical takes us on a journey back to the golden age of Hollywood. Crammed full of Irving Berlin’s unforgettable greatest hits including ‘Cheek to Cheek’, ‘Top Hat, White Tie & Tails’, ‘Let’s Face the Music & Dance’ and ‘Puttin’ on the Ritz’, Top Hat follows the adventures of Broadway superstar Jerry Travers as he dances through Europe to win the heart of beautiful society girl Dale Tremont. This reviewer was invited to have a sneaky peak at rehearsals.

Originally a Hollywood smash hit film for Fred Astaire and Ginger Rogers, this romantic comedy brings to life the colour, glamour and glitz of 1930s Hollywood with an array of dazzling costumes and captivating tap dances.

The multi-award winning Carlton Operatic Society are well placed to present such a challenging show, where the 15 song and dance numbers are all on a grand scale and require complex choreography, sharp execution and a good deal of ‘flair’ to capture the essence of the era. Choreographer Rachael Rees has a cast who are focused and talented, picking up steps and adding detail with pace and confidence. The harmonies in the singing are luscious, and the very talented principals are full of character and vim, with spot on comedic timing but also showing emotional depth.

Ross Lowe, Director, is working the cast hard to ensure they understand the time and the place they are set in, despite the bland church hall they rehearse in hardly conjuring a Venetian piazza on a sunny morning! This ensemble scene is full of energy and movement, creating a real impression of a bustling square and snap shots of different characters. It certainly looks like they’re about ready to ‘Face the Music and Dance’!