From the international, best selling novel, of ‘The Kite Runner’ by Khaled Hosseini – the play version by American writer, Matthew Spangler – returns to Nottingham Playhouse as it begins its thrilling national tour. Directed by Giles Croft and given a stunning design by Barney George the play has won many awards and general popularity in its two West End runs with standing ovations at every performance. 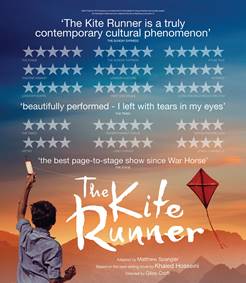 Khaled Hosseini himself calls the work an ‘intimate-epic’. By this he infers that the narrative is often deeply personal and other times reflects on a sweeping adventure and ethical parable. The original story germinated from a newspaper report quoting that the Taliban had ‘banned the sport of kite flying in Afghanistan’. Hosseini, who enjoyed this sport himself in 1960s Kabul, was then inspired to write a short story which evolved into the novel.

This story of Amir and his dual betrayals towards his childhood friend Hassan; the damaging consequences, the additional turmoil of destructive historical events in Afghanistan, take us on a vast emotional roller-coaster journey spanning thirty years.

This is also a compellingly complex story of the Afghan immigrant experience in America. Its themes are as much about a country’s struggles to live with violence and oppression as they are the freeing natures of true love and redemption. The  painfully honest tale is told through narrative and reflective form – directly through the main character, Amir. 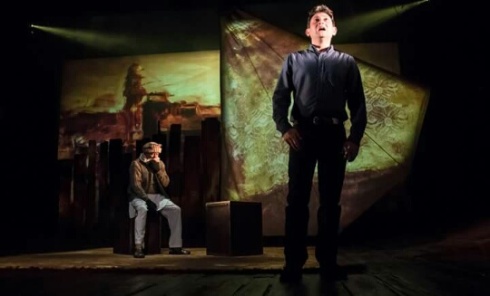 Amir is a deeply flawed character. As a child growing up in 1970s Kabul, he is in turns deceitful, dreamy, sensitive, capable of lying and betrayal. He has a budding ambition to be a writer and yet he constantly feels anguished and desperate to be loved by his successful but distant, father. Given these traits he is not aloof to his shortcomings and failings. As he grows older and flees to the USA with his father, Amir’s story becomes one of guilt and remorse and a deeply felt wish to redeem himself. From an unexpected phone call the adult Amir seeks, “… a way to be good again.” He must return to a less familiar Afghanistan now under Taliban rule and save a life, under life threatening circumstances, or live with the guilt of his actions forever. 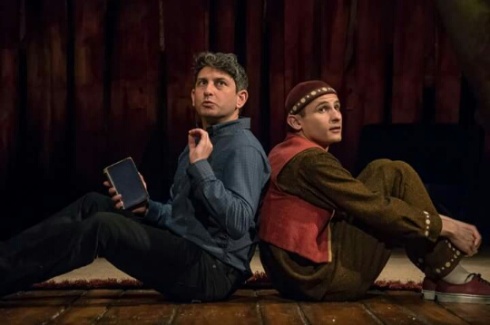 The original Nottingham Playhouse production in May 2013 was a triumph of theatrical story telling and as heart breaking and moving as the novel itself, with hope at its ever shifting core. Matthew Spangler’s well executed storytelling ensures that we continue to be gripped from beginning to end. This present production is witness to that. From the Nottingham Playhouse base this looks to be a stunning tour about to win new fans nationwide. 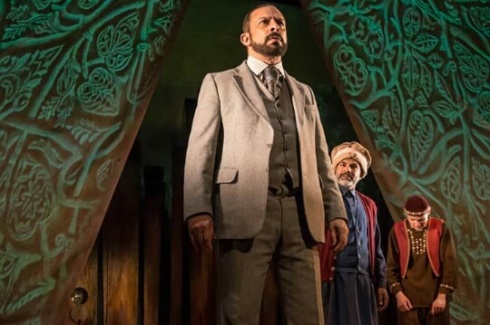 The production is blessed with a few new members of cast as well keeping as Hanif Khan the musician creating tempo and atmosphere. The nine year old Amir and Hassan are played by adults David Ahmad and Jo Ben Ayed. The challenge for Ahmad is that he has to play Amir as a child, a teen, a man at eighteen, twenty four and also narrate the piece as a thirty eight year old. And he does it superbly in a subtle and convincing performance that totally has the audience eating out of his hand.

Jo Ben Ayed as Hassan is immensely likeable and perfectly captures the character’s loyal, sweet and trusting nature and is very believable as the tragic orphan, Sohrab, in the latter part of the play. Hassan’s father Ali (Ezra Faroque Khan) is a wonderfully understated performance straight out of a story book. 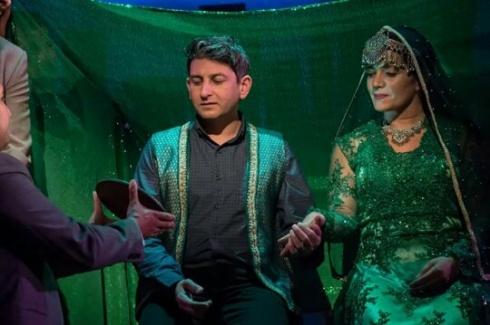 Another continuant in the cast as Baba is Emilio Doorgasingh who commands the stage whenever present and Doorgasingh’s portrayal of Baba as a man dying with cancer is heart -breaking. Bhavin Bhatt as Assef the socio-path and later Taliban leader is disturbing to the core.

Amiera Darwish adds a welcome female note in a practically all male cast as Amir’s future wife Soraya and is particularly convincing in a very short scene as Mrs Nguyen the Vietnamese shop owner.

The first half of the play centres on events in 1970s Kabul and the second half fast forwards to the escape from Afghanistan to Pakistan and on to the USA where events prove to be yet another cultural and emotional mountain to climb.

The stage set is a simple ochre coloured cobbled street curved like a shallow bowl with a backdrop of large truncated fence panels. The episodic nature of the play is enhanced and demonstrated through wonderful projections and a massive story teller’s carpet graces the stage throughout. Packing boxes are imaginatively utilised to create differing levels and particular scenes such as the Swap Meet market and a car journey. The lighting design by Charles Balfour is exemplary as is the projection work by William Simpson.

All in all, a totally wonderful theatrical experience that has the audience giving a well deserved standing ovation.