Creatively and socially stemming from the JeSuis symbol of protest and solidarity, #JeSuis (in progress) utilises a group of Turkish contemporary dancers choreographed by Curve Associate Artist Aakash Odedra who  investigate the terrible experiences of the oppressed, displaced and voiceless. 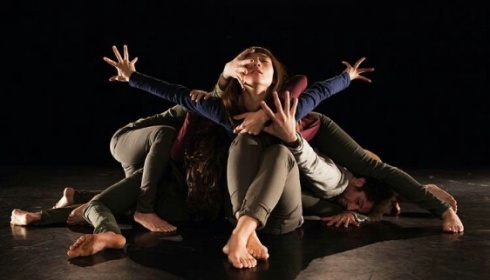 Utilising a fusion of styles, the work explores personal stories of conflict, media manipulation, displacement and identity. It also focusses on what makes ‘home’ for the displaced constantly on the move. It takes us from our comfortable seats to places of deep discomfort and desirous of a cessation of the cruel and intimidating events unfolding through this mainly dark, dance-drama. This is especially true of the three  women who are silenced vocally and physically  by being wrapped in cling film. This image of brutally forced restriction is one that will stay with many an audience member for a long time. In a world where terrible personal stories such as these are often ignored or glossed over by the media #JeSuis holds nothing back. As a work in progress and part of the Journeys Festival International it will be fascinating to see how the work evolves on its own creative journey.

#JeSuis begins with still and frightened, seated figures, on the near dark stage. A lamp swings over a man’s head and a woman tries, but fails, to speak into a hanging microphone. An aggressive uniformed man enters the dance as something other than human and, inhumanely, he takes charge of the story unfolding, often in disturbing ways. The latter part of the 45 minute dance piece finds the tables turning and new, more hopeful situations enfolding but, with a subtle hint at the insidious nature of extreme political control worming its way back into society.

Throughout #JeSuis Aakash explores the strangulation of speech, the rise of xenophobic attitudes and the displacement of people through conflict. They are startlingly effective and moving, demonstrating the power of dance to effect change and attitudes against oppression. This is truly dance that should mean something to important to everyone. Freedom.

There are scenes of violence and sexual abuse.