In this ‘five star’ nationwide UK tour of Million Dollar Quartet Jason Donovan is cast as legendary record producer Sam Phillips – the man who brought the four recording stars, Elvis Presley, Jerry Lee Lewis, Johnny Cash and Carl Perkins together to create music history at his Memphis ‘Sun’ recording studio. Donovan’s American accent is understated and this works well within the piece as does his impressive emotional range in the role. As  Sam Phillips Jason Donovan often talks directly to the audience in a quasi retrospective way and, coupled with Donovan’s  natural charm, this style of presentation works well,  keeping the audience constantly engaged with the story-line. Hard working Jason Donovan has recently been in Nottingham with the tour of Priscilla Queen of the Desert and he has an impressive musical theatre background, including leading roles in The Rocky Horror Show, Chitty Chitty Bang Bang, and even Sweeney Todd. 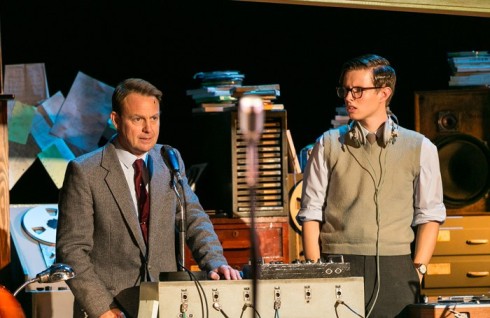 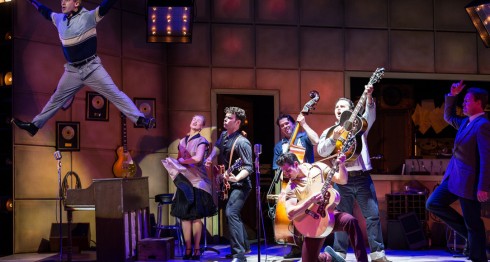 Million Dollar Quartet is the creation of Colin Escott and Floyd Mutrux and it has recently embarked on its first UK tour. It is currently at Nottingham Theatre Royal having recently wowed the audiences so far at Leicester Curve and Sheffield Lyceum.

The musical theatre piece, which is a true story of an impromptu jam session in 1956, with musicians and singers that are now household names, rekindles a whole  era of early rock and roll musicianship. The show’s 1950s period feel is very plausible and its dynamic energy enthrals this appreciative mainly late middle aged audience. Ian Talbot directs this vibrant and energetic piece of theatre which has so much more about it than a jukebox musical might. At times you can almost imagine the cold streets outside the closed in world of the tiled recording studio and the heat generated by the music being created and recorded inside.

Robbie Durham is impressive as Johnny Cash and vocally and stylistically spot on as the troubled God fearing singer. Ross William Wild joins the cast as an excellent young Elvis Presley. Whilst he isn’t an Elvis lookalike his mannerisms, movements and singing voice certainly comes across well as the future King of Rock and Roll.  Wild’s own recent rock and roll style musical theatre roles include Norman in Dreamboats and Miniskirts UK tour and Kenickie in the Grease (National tour). Katie Ray brings her female musical talents energy and sassiness to the stage as Presley’s girlfriend Dyanne and offers up a sympathetic ear to Sam Phillips as he confides in her his fatherly feelings towards the young musicians under contract with Sun Records. 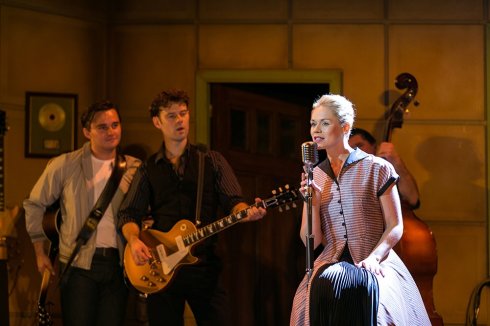 Matt Wycliffe appears as Carl Perkins and his authentic guitar musicianship is very impressive. You would think you were listening to the original play. Perkins is played as a frustrated one hit wonder song writer and artist with great potential  (he wrote Blue Suede Shoes). When he encounters the cheeky Jerry Lee Lewis his latent aggression comes to the fore. Later on in the story we see a grudging respect for Jerry Lee Lewis’s exuberant talents. 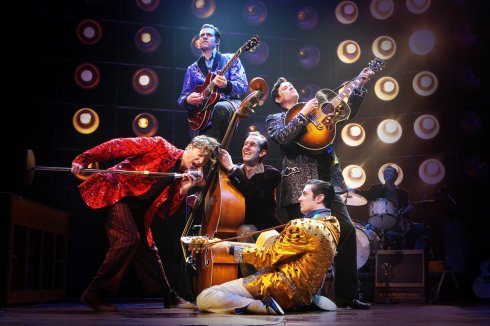 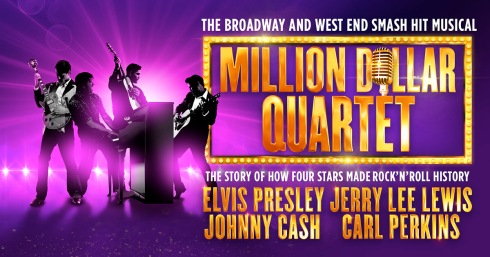 For a very upbeat evening at the theatre roll yourself down to Nottingham Theatre Royal and be ready to rock!