The Legend of Lady Rock the musical, created and written by Sarah Walker -Smith and musically directed by Chris Rees well and truly rocks on its World Premiere in The Space at Nottingham Contemporary Gallery in Nottingham’s historic Lace Market Quarter. The high walled venue suits the grandeur and majesty of this dark and ancient Scottish tale and the superb backdrop visuals enhance the drama of the piece exquisitely. Mark James’s three sectioned economic setting takes us swiftly from McLean bedchamber to rocky clifftop view point and the fireside of the Campbell clan. Lighting and sound are by Nick Gale and Simon Carter. 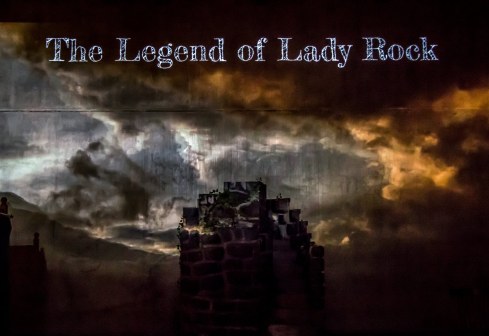 The singing and musical accompaniment throughout the show is of a very high standard. Once the initial establishing of characters, their plans and motivations and the blossoming love between Lachlan McLean (Joe Heap) and Catherine (Lindsey Jaycock) are recognised we get into meatier subject matter. Catherine fails to get pregnant after months of wedlock and guilt and blame eat into the newly weds souls. Meanwhile Meghan (Rosie Cotter) laments her loss of her lover Lachlan because of the arranged marriage. Cotter’s rendition of the moving  ‘I See You In My Dreams’ brings a sympathetic tear to the eye.

Musically the work dramatically comes into its own after the first act number ‘Don’t Worry sung by the suddenly scheming handmaid Elizabeth (an excellent Judie Matthews) then taking us into a whole new musical territory with ‘It’s Time Now’. From a musical with choral numbers, solos and duets interspersed with dramatic text we quite quickly move into what feels and sounds like 97% sung through musical. The change over works well to pick up the dramatic pace that is needed to create tensions and intrigues and further the storyline.

The highlight of the first act is Catherine’s song ‘Why?’ as she is left to die on a rock as the sea rages around her. Jaycock really gives the acting and singing some welly and one feels her terror as we see the rough seas hitting against the rock through a filmed effect.

The shorter second act pulls out all the emotional stops with betrayal, deaths all around, rejection in love, personal demons taunting Lachlan and a determined refusal to forgive from Catherine. Elizabeth rejoices in her evil personal triumphs and her belting song ‘Elizabeth’s Curse’. But, when all is said, sung and done, it is not this reviewer who will spoil the ending of this fine, haunting new modern musical.

The fifteen strong cast of high standard local musical talent show great passion in demonstrating what is clearly a labour of great love. Much hard work and dedication has gone into creating and performing The Legend of Lady Rock.  The superb costumes really bring the piece a professional visual edge. As a first timer creating a full length musical Sarah Walker-Smith with Chris Rees’ musical direction and an army of talented helpers have a winning musical tale on their hands and we at East Midlands Theatre.com very much look forward to what they come up with next.

The show runs from 6th to 9th October and tickets and times are available via pgicalproductions.

One thought on “Review: The Legend of Lady Rock. World Premiere at Nottingham Contemporary Gallery.”