This production is adapted by playwright Lawrence Till from Barry Hines’ novel – A Kestrel For A Knave and runs from Friday 13th September to Saturday 5th October.

The story of Kes concerns a 1960s Yorkshire schoolboy called Billy Casper who is bullied, neglected and misunderstood and, in the Derby Theatre production directed by Sarah Brigham, Billy is played with great energy, passion and emotional subtlety by Sam Jackson. Billy is bullied by his older brother Jud (Jimmy Fairhurst) and emotionally ignored by his feckless Mother. As the story evolves we discover that Billy has been teaching himself falconry and devoting himself to his found kestrel wherein he finds a personal peace, an unbridled excitement and a purpose in life. The kestrel training is a challenge to the young man, a hard won reality and also infers a deep desire for personal freedom and an attempt to find himself in amongst the cruelties he encounters at school and in his family life. On the positive side Billy’s character is transformed when he speaks to the school class and to the audience about his love of the wild kestrel he has named Kes and he is solely supported by an English language teacher, a Mr Farthing, performed with great compassion and conviction by John Elkington.

Jackson is especially strong in the heart breaking scene where he confronts and fights his useless Mother and nasty brother Jud and later on when he breaks into an abandoned cinema and pours out his feelings to his absent father who he imagines up on screen. The emotional truths and the teenage frustrations are brilliantly handled and conveyed on stage.

In amongst the darker elements of the play are lots of laughs during the school scenes – Paul Clarkson is perfect as the controlling 1960s headmaster and Andrew Westfield is hilarious as the menacing but rather thick PE teacher, Mr Sugden. The laughs work on two levels: the genuinely funny plot and actions/reactions and also on a nostalgic level for those in the audience old enough to have been a school child themselves in the 1960s. The local children playing the school kids are terrific and thoroughly believable in their parts and they work very intuitively in the choreographed ensemble movement although each retaining an individual personality within the group. The professional actors playing two of the schoolboy speaking roles (Thomas Pickles as Tibbut and John Holt -Roberts as the bully MacDowell) are excellent. If a production of One Flew Over A Cuckoo’s Nest ever came up Pickles would be a perfect casting as Billy Bibbit. 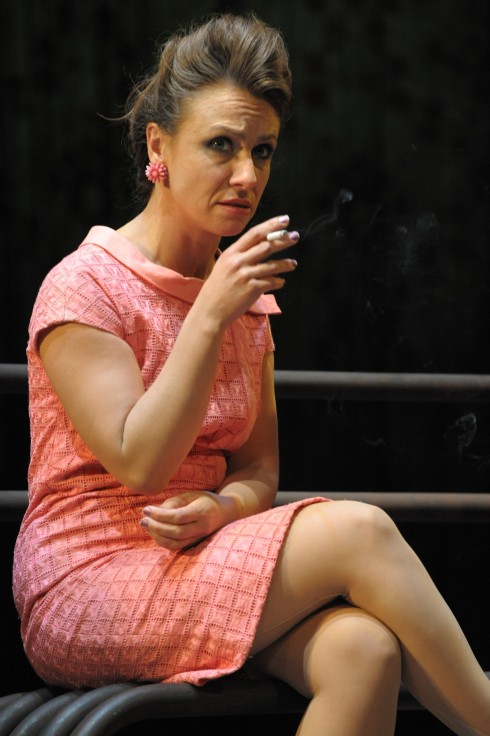 Samantha Seager as Billy’s estranged Mum – Mrs Casper – is extremely exasperating in her selfish reluctance to offer Billy love and support in his moments of deepest need and plays the unsympathetic role with great conviction. Nova Skipp is utterly brilliant in her very different roles as the teacher Miss Fenton, Mrs MacDowell, Librarian and Miss Rose. As far as the audience are concerned each character she plays could well have been a different actress performing. 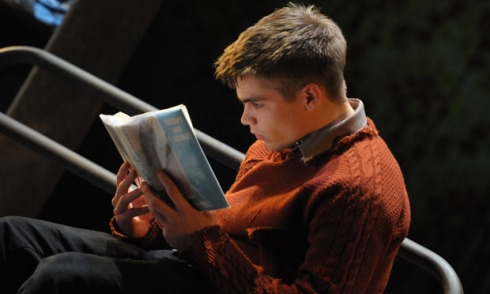 The whole piece is a terrific example of ensemble playing and the very moving Derby Theatre production is to be thoroughly recommended. The simple setting and use of panoramic back projections coupled with a dynamic musical score by composer and sound designer Ivan Stott really enhance this play and the whole package makes for a wonderful night at the theatre.