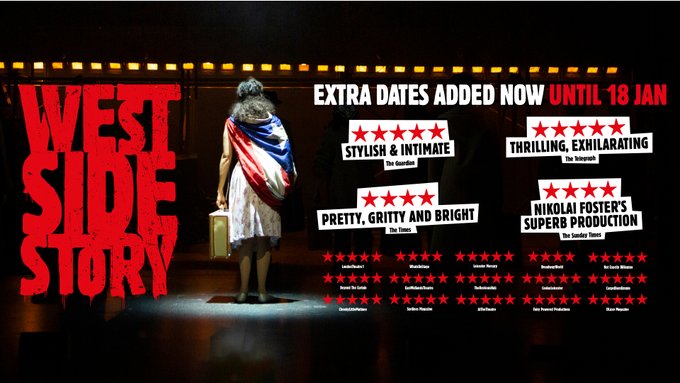 It has today been announced that Curve theatre is extending the run of its critically-acclaimed Made at Curve production of the classic musical, West Side Story.

Awarded five-stars by The Guardian and The Telegraph, and East Midlands Theatre, the production will now run until 18 Jan 2020 due to demand from audiences. “We’re thrilled to add a further week to our run of West Side Story so even more people will be able to enjoy this astonishing show. Our remarkable actors, orchestra and production team have created something truly special here in Leicester and we’re immensely proud to be able to share our production with more audience members for even longer.”

New York City, West Side, 1957. In the midst of gang rivalry and racial tensions, love at first sight strikes between Tony, a founding member of the White-American Jets and Maria, the sister of Bernardo, leader of the Puerto Rican Sharks. In the face of danger, the two young lovers continue to meet in secret – but the Jets and the Sharks have one last rumble to fight out.

Inspired by Shakespeare’s classic tragedy Romeo and Juliet and with a timeless score including ‘Tonight’, ‘America’ and ‘I Feel Pretty’, West Side Story represents one of the greatest musicals of all time, filled with romance, charm, aggression and heartbreak.

West Side Story is based on a conception of Jerome Robbins, with a book by Arthur Laurents, music by Leonard Bernstein and lyrics by Stephen Sondheim.

Tickets for West Side Story at Curve are available to book now. To find out more and purchase seats, visit www.curveonline.co.uk, call Curve’s Box Office on 0116 242 3595 or visit the theatre in person.