Adapted by Theresa Heskins Directed by Sarah Brigham and composed by Ivan Stott.

A fantastic opportunity for members of the community to perform on the main stage alongside a professional cast of actors at Derby Theatre. 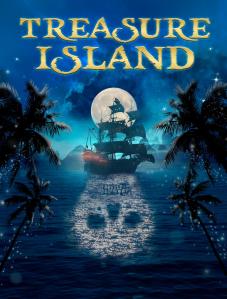 Next Easter, Derby Theatre’s big main house production for the spring will be Theresa Heskins’ award-winning adaptation of Treasure Island, a spectacular swashbuckling adventure and pirate-filled production perfect for the whole family, and we are looking for members of the community to join the cast.

Treasure Island follows the hugely successful production of The Jungle Book in spring 2019 and once again, all performances will have fully integrated BSL and Captioning. The professional cast will consist of Deaf, hearing and interpreting actors and musicians. The creative team will also include Deaf people.

Community auditions to perform in Treasure Island will be held at Derby Theatre throughout the day on Saturday 18 January in groups of 15. Auditions are open to all and we are looking for young people and adults alike (aged 9+) of all genders, ethnicities and abilities to perform as part of the full acting company in the production.

Treasure Island will have fully integrated BSL interpretation and Captioning, available on all performances (and some performances will be audio described). The company and production team will also include Deaf artists and creatives. As such, we are particularly interested in welcoming Deaf people from the region to audition for the community company (and a BSL interpreter will be present at all auditions). Previous experience in performing is not essential, but an eagerness and energy to perform, and a strong commitment to the production, is.

Each audition slot will last for one hour, and all auditionees will take part in a range of group drama exercises and games, as well as asked to sing/perform/present in a group. You will need to wear comfortable clothes and footwear and bring along a bottle of water for refreshment.

The Theatre is looking for three teams, to include up to 8 per team, who will perform on a rotational basis (with a final performance schedule for the community company still to be confirmed). Community rehearsals will commence from Tuesday 25 February and the community company will be required to rehearse three times a week during the whole rehearsal period, on Tuesday and Thursday evenings from 6-8pm and on Saturday mornings from 10am-1pm. Rehearsals, including the technical week of the show, will run until Friday 27 March and Treasure Island will then run at Derby Theatre, on the main stage, from Saturday 28 March until Saturday 11 April.

The community company will need to attend ALL rehearsals and be available throughout the WHOLE run of the production. PLEASE NOTE: this is a non-paid opportunity but an allocation of free tickets will be offered to all company members.

HOW TO BOOK AN AUDITION SLOT

PLEASE NOTE: audition slots will be offered on a first-come-first-served basis. For the lower limit of the age range, young people will need to be 9 by the start of rehearsals (on Tuesday 25 February). Derby Theatre community audition slots are usually incredibly popular, with places getting booked up very quickly, so early booking is highly recommended.

If you are successful in booking an audition slot, we will email you to confirm and send you more information. For any questions you may have once you have received the additional information please email Stuart Allen, Senior Producer at Derby Theatre at s.allen@derby.ac.uk.

Stuart Allen (Senior Producer, Derby Theatre) said: “This is a fantastic opportunity to join our community company, performing alongside an adult company of professional actors, for our family production of Treasure Island next Easter. We are delighted that this will be our second Derby Theatre produced show with fully integrated BSL interpretation and captioning, with lively original music, stunning sets and costumes. We’re very much looking forward to meeting members of our community who are eager to audition and perform with our company of actor-musicians. You don’t have to have previous performance experience, so why not come along to the audition and give it a go?”

Theresa Heskins’ award-wining adaptation of Treasure Island is inspired by Robert Louis Stevenson’s classic tale of buried treasure and buccaneers. Brimming with a bountiful supply of original live music, sumptuous sets and costumes, drama and ahoy me hearties, this will be a thrilling theatrical voyage for all ages to embark on. Batten down the hatches and book now for the truly wonderful Treasure Island.

Treasure Island will run at Derby Theatre from Saturday 28 March until Saturday 11 April, with tickets from £10. We will present a Relaxed Performance (for audience members who might benefit from a more relaxed environment) on Sunday 5 April at 2pm plus a Dementia-Friendly Performance on Thursday 9 April at 1.30pm. For more information and to book tickets call the Box Office on 01332 593939 or book online at http://www.derbytheatre.co.uk. Enquiries can also be made via our text number on 07717 364964.