It appears that, in the creation of the Alan Jay Lerner and Frederick Loewe musical My Fair Lady, historically a few deaths had to occur until George Bernard Shaw’s 1912 play Pygmalion became a musical in that opened on 15th March 1956 at the Mark Hellinger Theatre in New York. With Shaw’s blessing, a Hungarian producer called Gabriel Pascal turned Pygmalion into a film in 1938. The cinematic version won several awards including an Oscar for best screenplay. Pascal also saw the potential for the story to be turned into a stage musical but waited until after Shaw’s death in late 1950. George Bernard Shaw was adamant that the domineering and insensitive Higgins and lovable Eliza should never marry and by the end of Pygmalion Eliza has become an independent woman, well up to defending her independence in a battle of words with Higgins. In Greek mythology Pygmalion was a sculptor who carved a statue of a beautiful woman out of ivory. The statue was so beautiful that Pygmalion fell in love with it. The symbolism in the play has to do with Henry Higgins falling in love with his own creation. Now let’s move on to the musical version… 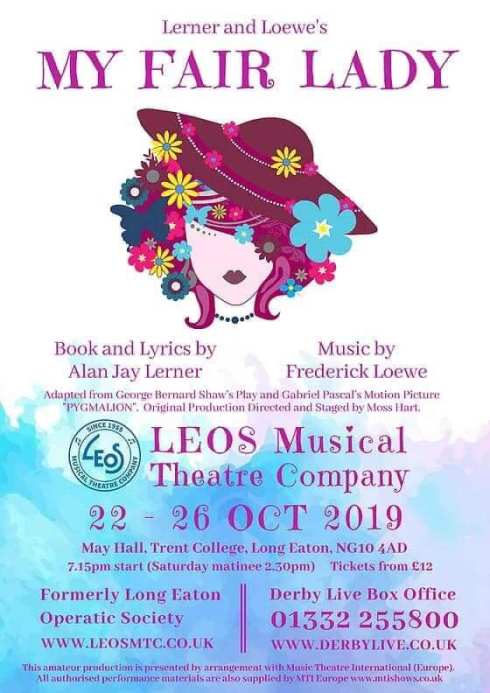 Pascal then approached Alan Jay Lerner and his collaborative partner Frederick Loewe. They struggled to make the musical work without a love story. The idea was temporarily put on hold and almost abandoned as unworkable. After Pascal’s death in 1954 Lerner and Loewe decided to revive the project and a revised plot and new music were written. Lerner and Loewe’s ability to capture the feelings of the characters through words and orchestration made My Fair Lady one of the greatest classical comedy/drama musicals of all time. My Fair Lady was the winner of six Tony Awards in 1957: Best Musical: Best Performance by a Leading Actor in a Musical: Best Scenic Design: Best Costume Design and Best Conductor and Musical Director. It was nominated for four others including Best Performance by a Leading Actress in a Musical and Best Choreography. Julie Andrews played Eliza Doolittle and Rex Harrison was Henry Higgins. In the 1964 film version Audrey Hepburn brought a vulnerable glamour to the role of Eliza Doolittle after Julie Andrews was overlooked in favour of Hepburn, then a big Hollywood star.

Over the sixty plus years since the original production of the musical there have been hundreds of productions both professional and amateur put on a round the world.

It is well beloved for its story of the pompous phonetics professor Henry Higgins, a man so cocksure of his abilities that he takes it upon himself to totally transform a Cockney working class girl into someone who can pass for a cultured member of high society. The flower selling girl, whose name is Eliza Doolittle, agrees to speech lessons to improve her job prospects and one day actually work in a proper flower shop. Higgins and Eliza clash then form an unlikely bond. Suddenly aristocratic and working class characters collide in an ever twisting plot all based on a wild bet between Higgins and his friend Colonel Pickering. The show has some of the most memorable songs in musical theatre and audiences worldwide enjoy the likes of Why Can’t the English?, Wouldn’t It Be Loverly?, On The Street Where You Live, With A Little Bit of Luck, Get Me To The Church On Time, The Rain In Spain, I Could Have Danced All Night, I’ve Grown Accustomed To Her Face, and Show Me.

The latest amateur production to grace the Long Eaton based Trent College May Hall  stage is by LEOS Musical Theatre Company formerly known as Long Eaton Operatic. It is directed by the talented director Nigel Taylor and musically directed by James Bowden who brings a freshness to the songs through his arrangements and his wonderful twelve strong orchestra. Laurie Trott as choreographer imparts an impressive amount of joyous vigour to the dance sections where all of the ensemble seem to be having the time of their lives.

The set takes us effectively from Covent Garden to the Higgins household, a day at the Ascot races, the Embassy ballroom and back again. Each stage transition, in what is a lengthy but enjoyable production, is done very smoothly and professionally.

There are no weak links in this large and committed My Fair Lady ensemble and the lead characters played by Emma Collins (Eliza Doolittle), Simon Parker (Henry Higgins), Dave O’Neal (Colonel Pickering), Dan Bates (Alfred P Doolittle), and Rob Chilton (Freddy Eynsford – Hill) are all top notch. Emma Collins is superb as Eliza in both the singing and acting stakes. Her character’s journey from broad Cockney flower girl to a socialite who has a growing realisation of the realities of her relationship with Parker’s bombastic and chauvinistic Henry Higgins is spot on.

It is important that Henry Higgins isn’t just played as a snobbish unfeeling academic and Simon Parker gives us a fully rounded performance, sings delightfully and is both likeable and totally exasperating as a short sighted commitment phobic. His partnering with Dave O’Neal as the slightly more enlightened Colonel Pickering is both a comic and dramatic delight.

Dan Bates gives his drunken sot Alfred P Doolittle plenty of welly or as some might say, plenty of ooomph! Bates lights up the stage every time he appears and his gutsy performance of the rough diamond Alfred P Doolittle is one of the big highlights of this fine showing of My Fair Lady. 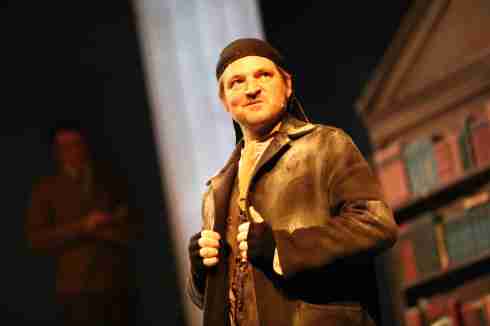 Rob Chilton makes the most of his small but important role of the gauche love struck Freddie Eynsford- Hill and we love his very confident and full of feeling rendition of The Street Where You Live. Living a rather rarefied life Eynsford – Hill looks terribly, and amusingly completely out of place in his straw boater and white suit as he appears amongst the working class folk in the 1912 rotting cabbage leaf world of Covent Garden.

Angela Walters and Liz Woolley act out their respective Mrs Pearce and Mrs Higgins perfectly. There is a great deal of understated confidence shown in each of these roles and their believability is a joy to watch.

This sparkling amateur production of Lerner and Loewe’s My Fair Lady is graced with some superb costumes from Charades Theatrical Costume Hire – St Helens. The brilliant costumes really give this whole show package a visual lift and enable the cast to really shine knowing they look absolutely right for themselves and their audience.

A thoroughly enjoyable production of My Fair Lady by LEOS Musical Theatre Company with a top class, focussed and talented cast and beautifully harmonic ensemble.

Our Amazon UK link to music, stage and screen books and all other products. Great offers.