A new adaptation of Alfred Hitchcock’s THE LADY VANISHES 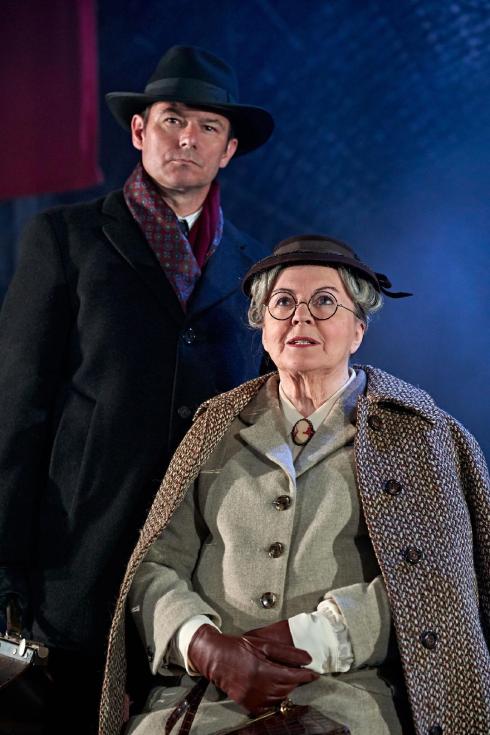 Bill Kenwright presents the latest instalment from the hugely successful Classic Thriller Theatre Company. ‘Master of Suspense’ Alfred Hitchcock’s The Lady Vanishes has extended its UK-wide tour throughout 2019, and will play at Derby Theatre from Monday 7 – Saturday 12 October.

Building on the phenomenal decade-long success of The Agatha Christie Theatre Company, The Classic Thriller Theatre Company presents a quick-witted and devilishly fun thriller, based on the 1939 Hitchcock classic, ranked as one of the best British films of all time.

When Socialite Iris’ unexpected travelling companion suddenly disappears, Iris is perplexed to find that all the other passengers deny ever having seen her. But with the help of musician Max, she turns detective, and together they try to solve the mystery of why the lady vanished …

The cast is led by BAFTA-nominated actress, Derbyshire’s own Gwen Taylor, whose on-screen credits include the titular role in ITV’s Barbara, two years as Anne Foster in ITV’s Coronation Street, as well as Monty Python’s Life of Brian and The Lady in the Van. Joining her is her Coronation Street son and ‘Villain of the Year award’ winner Andrew Lancel, whose theatrical credits include Twelve Angry Men, The Small Hand and Cilla. Also featuring Denis Lill, star of the highly acclaimed TV drama The Royal; Emmerdale and Call the Midwife actress Scarlett Archer; hit record and movie star Mark Wynter and Ben Nealon (Soldier Soldier).

The production is directed by Roy Marsden who is best known as an actor, particularly in his role as Commander Adam Dalgliesh in ITV’s P.D. James series, which he played for 15 years. But he has also been directing plays since he was 15 years old and had successful West End runs with Noel Coward’s Volcano and Agatha Christie’s (under the pen name Mary Westmacott) A Daughter’s a Daughter. This is now Roy’s third time directing a Classic Thriller Theatre Company production having previously directed Rehearsal for Murder and A Judgement in Stone.

This adaption of the Hitchcock classic will go on to visit Darlington, Horsham, Exeter, Brighton and Torquay.

Tickets are now on sale. For more information and to book tickets, call the Box Office on 01332 593939 or book online at http://www.derbytheatre.co.uk. Limited availability: get £5 off on Monday 7 October at 7:30pm (ticket bands AB) when you become a Derby Theatre Friend (contact Box Office for more information).

ACCESSIBLE PERFORMANCES BSL performance will be on Thursday 10 October at 7.30pm.

Audio Described performance will be on Saturday 12 October at 2.30pm.

Derby Theatre (previously Derby Playhouse) has a long and rich history of delivering high quality drama to audiences. Through Derby Theatre’s unique partnership with University of Derby, and as an Arts Council England National Portfolio organisation, the theatre has transformed from a traditional producing house, to an organisation of training, mentorship and artistic excellence.

Led by Artistic Director and Chief Executive Sarah Brigham, Derby Theatre is bringing together creative professionals and audiences to tell compelling stories and take artistic risks. For 2018 – 2022, Derby Theatre will receive a 59% increase in its funding from Arts Council England, to enable it to continue and build upon the valuable work that it has started. This will mean more Derby Theatre productions at the theatre, more community work, more work with children and young people and deeper, more meaningful engagement with audiences.

Derby Theatre is a vibrant and thriving theatre. A producing house that combines its professional programme with an exciting suite of undergraduate and postgraduate courses, as well as an emerging talent programme aimed at developing the next generation of artists. Meanwhile its community engagement programme reaches out across our region including people of all ages and from all backgrounds in the work of the theatre.

‘Increasingly the most crucial theatre in the region because of its emphasis on learning, nurturing and nourishing’ Lyn Gardner, The Guardian.