If we had six stars to offer this most excellent Made at Curve production of Hanif Kureishi’s iconic story My Beautiful Laundrette we would be found looking around for seven. Five stars hardly seems enough. Nikolai Foster’s direction is faultless and offers no unnecessary spin on a text and story that is so brilliantly conceived and smartly adapted for the stage, from Kuresihi’s own film script, and there isn’t a spare word or breath out of sync.

The play goes full cycle in terms of dramatic arcs and, in amongst the grubby bleakness of a 1980’s Thatcherite Britain replete with racism and violence, shines some hope of love and happiness for the unlikely pairing of Pakistani Omar (Omar Malik) and former racist skinhead Johnny (Jonny Fines). The script is laced with some classic witty lines and circumstances from Kureishi’s pen bought playfully to life by a top quality cast and Nikolai Foster’s fine eye for detail and character interaction.

If one may part quote from Kureishi’s autobiographical essay The Rainbow Sign written in 1986, at one juncture, regarding the Asian migrant family 1980’s experience, Hanif Kureishi says “ ‘My country’ isn’t a notion that comes easily. It is still difficult to answer the question, where do you come from? I have never wanted to identify with England, but despite this, some kind of identification with England remains… Two days after my return I took my washing to a laundrette and gave it to the attendant only to be told she didn’t touch the clothing of foreigners”

Very pertinent to his My Beautiful Laundrette play, of racism Kureishi writes: “It was that the English misunderstood the Pakistanis because they only saw the poor people. If the British could only see them, the rich, the educated, the sophisticated, they wouldn’t be so hostile. They’d know what civilised people the Pakistanis really were. And then they’d like them. Racism goes hand in hand with class inequality. Among other things racism is a kind of snobbery, a desire to see oneself as superior culturally and economically, and a desire to actually experience and enjoy that superiority by hostility or violence.”

The British racism against the Pakistanis in My Beautiful Laundrette is represented by the ignorant, far right dogmatically blind idealisms and violent actions and words of skinhead Genghis, excellently portrayed by Paddy Daly. and his crony Moose (Balvinder Sopal). Their threatening nature, their posturing and pointless lives is a sad indictment of a wasted youth saturated with perpetual unreasoning bigotry. When Genghis ponders the future life of his pathetic would be Aryan cult he wonders out loud if the Nazi mentality will ever arise again in the far future. There is a contemporary moment of near silent gravitas in the audience response. Talk about a play’s content being prescient. 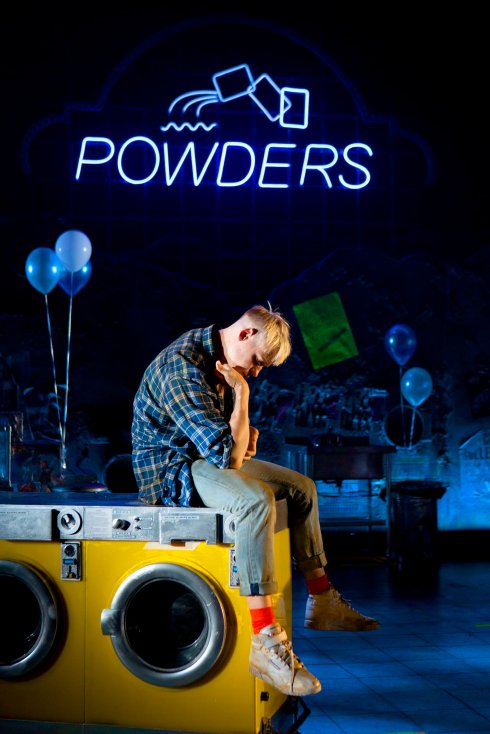 But that subject isn’t all that the, complex but very accessible, My Beautiful Laundrette is all about. At its heart are other stories about ambition; about change and the challenging of deeply held cultural expectations; about motivation and subterfuge; about corruption and deception; about the Asian woman’s place in 1980s society and above all about the dangers and joys of revealing oneself to another for love and real acceptance. My Beautiful Laundrette is an exceptional play and very beautifully brought to life on the Curve stage.

Stage and costume designer extraordinaire Grace Smart, gives us an original and very malleable set that takes us from location to laundrette to location and back again actualised by ultra swift manipulations by the actors and great lighting effects by Ben Cracknell, who cleverly incorporates the art of 1980s vibe neon within his illuminations. Tom Marshall’s sound design gives our collective ears some ingenious bursts and subtle atmospheric backgrounds of South London. Composers, Tennant and Lowe of The Pet Shop Boys soundtrack and especially commissioned background songs add immeasurably to the feel of the piece especially with the hopeful end ‘ No Boundaries’ song and its poignant lyrics at the tender centre of which, sings ‘I’m not the same as you, You’re not the same as me, but we both agree that love has no boundaries’. 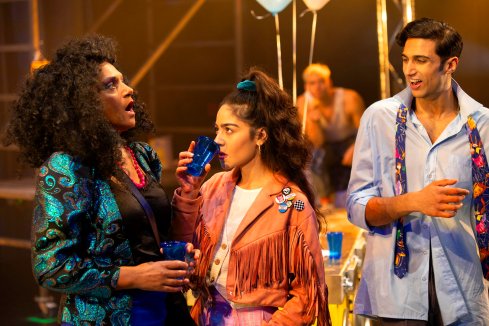 There are just nine members of this top class My Beautiful Laundrette cast four of whom double up. They are all uniformly bloody excellent and very committed to their roles. Paddy Daly portrays not only the thug Genghis but also American businessman Dick O’Donnell. Kammy Darweish gives a full of life naturalistic performance as Nassar the ambitious older businessman who is always on the lookout for fresh, at times dubious, business opportunities whilst almost openly cheating on his wife Bilquis (Bavinder Sopal) with his vibrant lover Rachel (Cathy Tyson). The first-class actor Tyson also plays Salim’s put upon wife Cherry. Hareet Deol’s savage manipulating drug dealer Salim is given a very strong performance in what is an unsympathetic role tempered with occasional humour against him by Johnny (Jonny Fines) and Omar (Omar Malik).

Central to the story Fines and Malik have a wonderful onstage chemistry and their love story in Hanif Kureshi’s fine writing coupled with their naturalistic portrayals evince Shakespeare’s maxim that ‘The course of true love never did run smooth…’ and also the modern take ‘where there is love there is life’. #Loveislove. 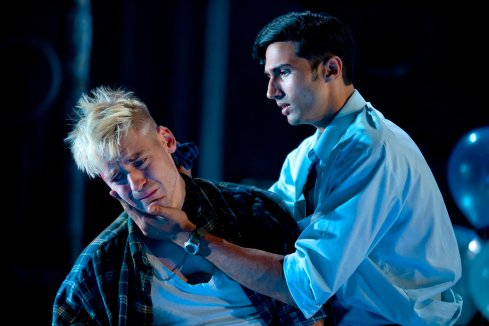 Gordon Warnecke, who played Omar in the original 1980s Channel Four film of My Beautiful Laundrette is a total revelation as Omar’s alcoholic Papa, the cultured, once famous Pakistani journalist. Warnecke’s warm vocal tones, general world weariness and love for Omar and even the white boy Johnny are so well expressed and his delineation of the man is crucially believable to the piece.

Nicole Jebeli brings great emotional depth to her character Tania, a young woman desperate to escape her stifling male centric British Pakistani community at all costs even to the point of an arranged marriage of convenience to Omar whilst suspecting his real sexuality. Jebeli’s presence onstage is one of great assurance and believability. Kuresihi’s story may be critically about the men and their relationships but there is also crucial evidence on this stage at Curve that the women are equally important to the story and the balance all comes out in the hotter than hot theatrical wash.

My Beautiful Laundrette is another great dramatic success for Curve and its artistic director Nikolai Foster, this year. Catch it at Curve or on its tour. This is no economy synthetics only production but the full package. Get purchasing those tickets. You won’t regret it.

My Beautiful Laundrette original screenplay available to order through this link. 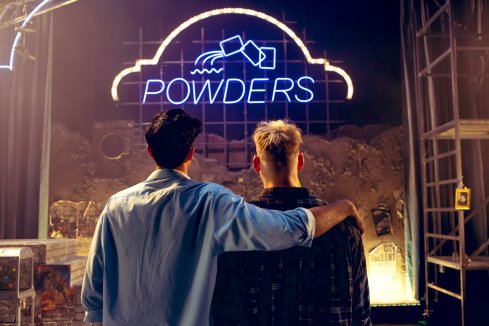 My Beautiful Laundrette runs at Curve until Saturday 5th October.

Our Amazon UK link to drama and poetry books. Great offers. Any purchase made through this link will help financially support East Midlands Theatre. Gratefully yours.