In Chicago Velma Kelly says “You know a lotta people have lost faith in America and what America stands for but we are the living examples of what a wonderful country this is!” She is corruption in a female form personified and talking of course about 1920s violence and glamour Chicago style – the stuff that the popular musical is inspired by. Crafty people, often in high public places, deliberately exploiting the system to escape from their crimes. But how relevant could these sleazy sentiments be to today’s America, or even the UK, where it seems that however criminal your activities if you are top of the pile then you can buy or get people, including the media, to totally ignore your way out of the wasp infested honey pot of public life and yet still enjoy the sticky tasty liquid. Was it ever thus. But right now we head back to the 1920s.

Historically by the 1920s, with the arrival of prohibition, gangsters, speakeasies and jazz, Chicago became know as Murder City. Two types of homicide proved particularly intriguing to the US public – the gangster murders that grew out of bootlegging wars and the phenomenon of women killing their husbands or lovers. Two of Chicago’s most famous murderers, Belva Gaertner and Beulah Annan provided the historical basis for Velma Kelly and Roxie Hart. Gaertner a former cabaret singer and serial divorcee was arrested for shooting her lover Walter Law in March 1924. She was acquitted due to lack of evidence and after drinking heavily claimed no memory of what had happened. Annan was a young housewife on trial for the murder of her lover Harry Karlstedt. She too was acquitted having convinced the jury that she shot him in self defence despite dramatic inconsistencies in her testimony. The all male juries were seduced by the sophisticated glamour of Gaertner and the doe eyed vulnerability of Annan. Newspaper headlines at the time screamed “A Woman Jury To Try Women Slayers Urged. Claim Now That Pretty Girls Get Free, Ugly Ones Sent To Pen.” Chicago’s famous jailbirds Al Capone, Belva Gaertner and Beulah Annan all make the association between glamour and violence an inescapable part of the history of the city of Chicago. 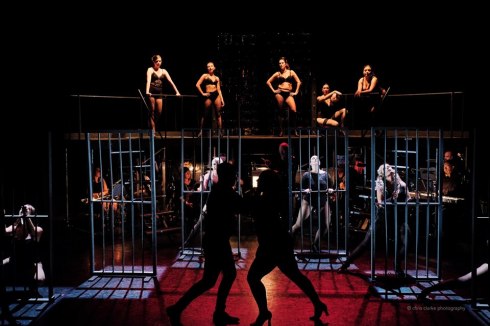 But drum roll and ‘Five Six Seven Eight’ tonight we are witnessing the crimes of Velma Kelly and Roxie Hart in Chicago the musical by composer John Kander and lyricist Fred Ebb who together are arguably one of the longest songwriting partnerships in musical theatre. Fred Ebb died in 2004 but their relationship lasted nearly forty years and still today their shows like Cabaret, The Rink, Kiss Of The Spiderwoman, Funny Lady and Chicago still play to packed houses.

This red hot production of Chicago is playing in the studio theatre at Lakeside at Nottingham University until Sat 6th July and is an ‘education’ in how to do amateur musical theatre to professional standards. Encore Performing Arts have been in operation since 2015 ambitiously beginning their opening season with A Chorus Line and continuing with Fawlty Towers, One Man Two Guvnors, Singing In The Rain, Avenue Q, And Then There Were None, Sweeney Todd, Seussical The Musical and Blackadder Goes Forth. They have a selective casting process ensuring the highest talent and most accurate casting for their high quality shows. 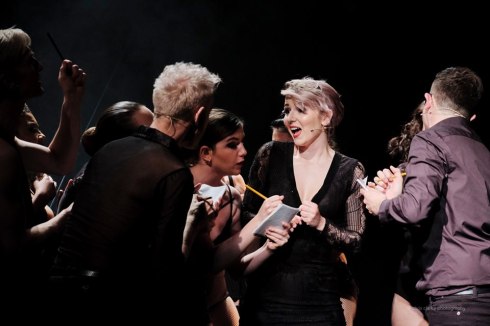 “Enough history already!” you may cry. The Lakeside main studio space is perfect for an intimate experience (or so they say) and the fatalistic indiscretions and stories of the characters in Chicago suit this space down to the ground. Filled with sexily lush numbers like ‘All That Jazz, Funny Honey, Cell Block Tango, We Both Reached For The Gun, Me And My Baby, Razzle Dazzle, Mister Cellophane, Class and Keep It Hot’ this show is pretty much guaranteed to be a critical and box office winner. But you can’t just casually do the songs as a performer you have to work your butt off and be the action and be the songs completely. Fudging through with waffle or body shy performances is a no no. Audiences feel cheated and da cheats get moidered. Concrete shoes make a speedy trip to da bottom of da river you capiche? We digress.

Seriously, the performer needs verve and drive, great delivery, diction, pizazz and above all the talent to inhabit the characters completely with emphasis on diction and storytelling. If you can’t actually hear what people are singing you can’t tell the story. Not a problem whatsoever in this brilliant production.

This showing of Chicago has in its cast some of the best amateur performers Nottingham has to offer and boy oh boy do they deliver five star performances. Not just the leads but the whole talented ensemble. There is not one weak link and everyone gives their whole commitment to the piece. In short, Encore’s Chicago is a highly professional offering.

Adam Guest’s sterling direction and the terrifically dynamic choreography of Lucy Castle makes the show look easy to do but the cast have worked hard for months perfecting every attitude and every single move. As a final show time component musical director Morris Fisher and his very impressive live band really jazz up the music on stage.

Vampish Velma Kelly is fantastically portrayed by Shona Stewart. Every inch the professional Stewart pours an admirable amount of oomph and style into her portrayal and gives great energy and superb vocals into this to die for role. 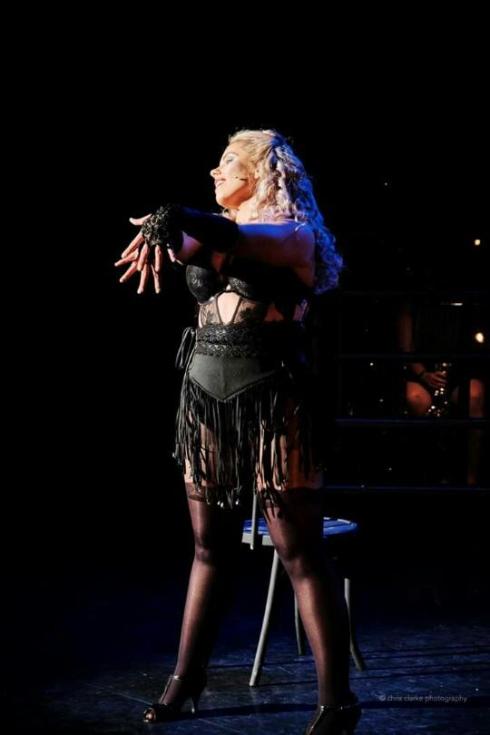 Lizzie Fenner as murderess Roxie Hart puts in a killer of a performance. Her acting and depiction of the tale and songs are spot on. Her performance is layered with subtleties and behind those sparkling eyes lurks a conniving beauty whose cruel mouth and mind will twist anything to her advantage. 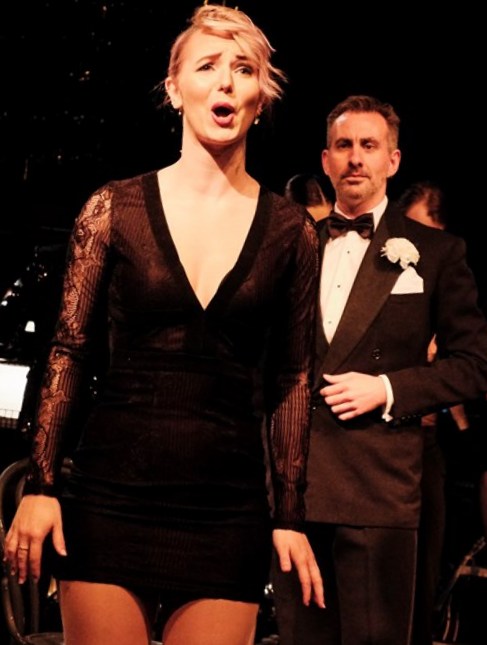 Confidence is king for performers on stage especially in this no holds barred sexy production. Revelling in the raunchy goings on and using his crooked lawyer nouse to his own advantage is Dave Partridge as charmer Billy Flynn. Partridge’s performance as Billy Flynn wouldn’t look out of place on a professional stage. He has the lovable rogue charm, the twinkle in his eye and top class vocals. 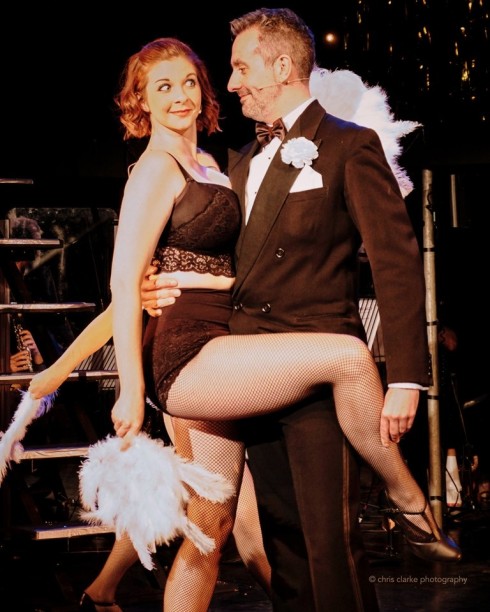 When Billy Flynn sings about love one person he is not referring to in the show is poor hapless Amos Hart. Amos (James Dean) gets the most love and sympathy out of any of the cast and his rendition of Mr Cellophane is very well done. We love him.

Matron ‘Mama’ Morton is given a confident winning performance here by Laura Jones. She captures all of Mama’s guile and is just the right amount of strong. Jones also delivers her classic ‘When You’re Good To Mama’ with panache and later in the show her ‘Class’ duet with Velma harmonises beautifully.

Jorge Diniz highly amuses with a falsetto performance as reporter with a heart Mary Sunshine. This is a hard role to deliver convincingly and Diniz does it very well and with plenty of knowing cheek.

Encore’s large Chicago ensemble sports an impressive array of talented boys and girls whose utter verve and confidence floods the Lakeside stage. Playing everything from sexy Vaudeville dancers to salacious news crazy reporters and lots in-between this ensemble make the show an absolute joy to watch. The dancing is wonderful and the court scene is especially well done. 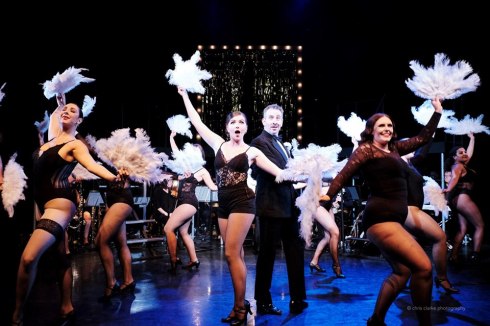 If you can beg, borrow, steal or even commit murder for a ticket do so right now. You won’t regret a cent of your ticket money.