ARE DELIGHTED TO ANNOUNCE 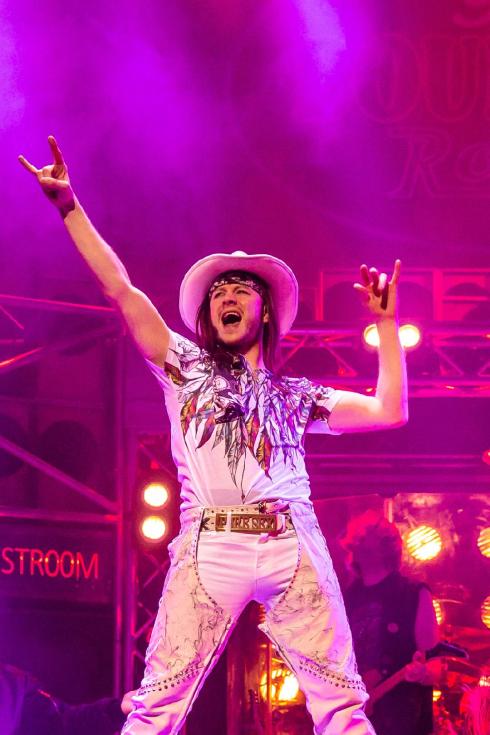 Kevin Clifton is an international Ballroom and Latin dancer and has won numerous titles across the world, including winning the Britain Latin Championships four times. He is best known as a Pro Dancer on BBC one’s ‘Strictly Come Dancing’ and is the current champion, having won the sixteenth series with his celebrity partner, Stacey Dooley, in December 2018. Kevin made his musical theatre debut in ‘Dirty Dancing the Musical’ at the Aldwych Theatre in London’s West End. Kevin then went on to become a principle dancer in Burn The Floor Dance Company and performed in the show’s record breaking Broadway run, in London’s West End and across the world. Kevin has also toured nationwide with Karen Clifton in 2017 and 2018 in their theatre show, ‘Kevin and Karen Dance’.

Kevin Kennedy is probably best known for his portrayal of ‘Curly Watts’ in “Coronation Street”. His West End theatre credits include ‘Amos’ in “Chicago” at the Adelphi Theatre and “We Will Rock You” at the Dominion Theatre. Kevin has played both ‘Caractacus Potts’ and ‘The Child Catcher’ in the hit musical “Chitty Chitty Bang Bang”, becoming the first actor to have played both roles. He has also appeared in the national tours of the musicals “The Rocky Horror Show”, “The Commitments” and most recently Kay Mellor’s “Fat Friends”.

Zoe Birkett is probably best known as the highest placing female contestant in ITV’s Pop Idol, 2002. She most recently appeared as ‘Rachel Marron’ in the UK tour of the “The Bodyguard The Musical”. She has also appeared in the West End productions of “Priscilla Queen of the Desert” and originated the female lead in “Thriller Live”. Her other theatre credits include the ‘Acid Queen’ in “Tommy” and ‘Maureen’ in “Rent”. She can currently be seen in Channel 5’s “Get a Holiday Body”.

Jodie Steele has appeared in the UK and International tour of “Wicked”, “War of the Worlds” in the West End at the Dominion Theatre, “Heathers the Musical” and “Myth”, both at The Other Palace, “Legally Blonde” at Kilworth House and the national tours of “Jesus Christ Superstar” and “Fame”.

Luke Walsh has appeared in many shows including “Boybands Forever” in Germany and ‘Caesar’ in “Antony and Cleopatra”, ‘Billy’ in “The Rabbit King” and “Smorgasbard”, all at Another Way Theatre. He has also appeared in the independent film “Don’t Let Go”.

Lucas Rush appeared as ‘St Jimmy’ in “American Idiot”, both in the West End and on tour. For this role he received a WhatsOnStage Award nomination for Best Supporting Actor in a Musical. His West End credits include ‘Roger’ in “Grease” at the Piccadilly Theatre and “We Will Rock You” at the Dominion Theatre. He has also appeared in the World Arena Tour of “Jesus Christ Superstar”, ‘Joe Vegas’ in the national tour of “Fame” and most recently the national tour of “Thoroughly Modern Mille”.

Andrew Carthy has appeared in the West End productions of both “Charlie and the Chocolate Factory” and “Loserville”. His other credits include “Guys and Dolls” at Kilworth House, the UK tour of “The Wedding Singer” and “Wicked” in Germany.

Vas Constanti’s many West End credits include “In the Heights” at King’s Cross Theatre, “Miss Saigon” at the Theatre Royal Drury Lane and ‘Riff Raff’ in “The Rocky Horror Show” at the Duke of York’s Theatre. He has also appeared in the national tours of “Oklahoma!” and “Flashdance – The Musical”.

Rhiannon Chesterman was in the original cast of the musical “Mrs Henderson Presents” at the Theatre Royal Bath and then the Noel Coward theatre in the West End. Rhiannon has also appeared in the UK tours of “Grease” and “Hairspray”.

“ROCK OF AGES” is an LA love story lavished with over 25 classic rock anthems. Lose yourself in a city and a time where the dreams are as big as the hair, and yes, they can come true!

This hilarious musical comedy features the songs, including We Built This City, The Final Countdown, Here I Go Again, Can’t Fight this Feeling and I Want To Know What Love Is, played loud and proud by an awesome live band.

Now a global smash with extensive runs in London’s West End, on Broadway and in Las Vegas, the show has also been made in to a star-studded Hollywood movie.

“ROCK OF AGES” has a book by Chris D’Arienzo and Arrangements and Orchestrations by Ethan Popp. It is directed and choreographed by Nick Winston (‘The Royal Variety Performance’, ‘Annie’ and ‘The Wedding Singer’) designed by Morgan Large (‘The Woman in White’, ‘Top Hat’, and ‘The Christmasaurus’) and has lighting design by Ben Cracknell (‘Young Frankenstein’, ‘Sunset Boulevard’ and ‘Annie’). Sound design is by Ben Harrison (‘Hairspray’, ‘Chitty Chitty Bang Bang’ and ‘Million Dollar Quartet) and musical supervision is by Barney Ashworth (‘Sunny Afternoon’, ‘Grease’ and ‘Mrs Henderson Presents’).