Noughts & Crosses at Derby Theatre  is a thrilling adaptation of Malorie Blackman’s dystopian novel. Addressing the many challenges of prejudice, societal norms and engaging teenagers in anything not screen-based, it hits home with searing truth and in
breathtaking style.

Malorie Blackman’s best-selling book has been adapted for the stage by Sabrina Mahfouz, a playwright, poet, screenwriter and performer, who has recently been elected a Fellow of the Royal Society of Literature, and is the recipient of the 2018 King’s Alumni Arts & Culture Award for inspiring change in the industry.  In other words, someone perfectly placed to understand and communicate how the personal and the political are inevitably interwoven through this story. 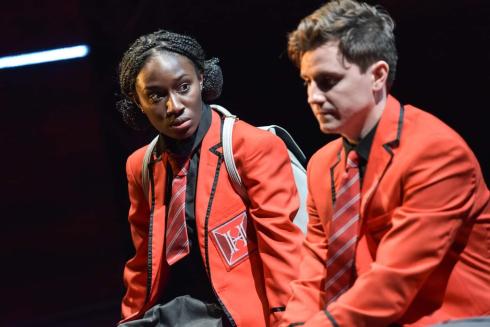 Sephy is a Cross: black, part of the ruling class, privileged. Callum is a Nought: white, impoverished, lacking opportunity. As children, they play together and these issues do not cloud their world, but as they enter their teenage years, the insulation of childhood falls away and there is a growing realisation of the complexity of life. They question the choices of their parents, strive to be better than them, have hopes and dreams of a brighter future, for themselves and society. Twas ever thus: the optimism and energy of youth is essential to challenge the status quo and question the assumptions of previous generations.

The relationship between Sephy and Callum is pivotal to the story, and Heather Agyepong and Billy Harris produce exacting performances, at once heartfelt and balanced. Agyepong has great stage presence, and is entirely embedded in the role, but has a lightness of touch and expression that allows us to believe in her. Harris is disarmingly good at being a naive young teenager, making his transition to activist in the second act something of a surprise. His dialogue with his older sister, Lynnette, is beautifully handled and very touching. These two are the only actors who inhabit one single role. The remaining cast members – Doreene Blackstock, Jack Condon, Daniel Copeland, Lisa Howard, Chris Jack and Kimisha Lewis – all play a main role in their respective families and countless other smaller roles too. In addition, they are choreographed stage hands; a harder working bunch you are unlikely to find. This is a very strong cast, each carrying the seriousness and responsibility of their roles within the narrative.

Creating a dystopian reality in a (touring) set must surely be a challenge for any designer but Simon Kenny presents an inventive, versatile and ingenious space. A series of panels morph from walls to apertures to cupboards, folding and unfolding like a paper fortune teller. It is a recognisable world but also ‘other’, parallel. Chairs and tables become mirrors, barricades and representative of swirling chaos as violence erupts. The predominant red tones are non-natural, lending a brutal, futuristic feel. Red is also the colour of power, of blood and fire and sexuality, and the saturated, claustrophobia of the singular shade heightens the energy in the whole piece. The Crosses are bright and jewel-like in their wealthy fabrics; the Noughts faded and wrung out.

The genius of the set is enhanced by Joshua Drualus Pharo’s exquisite lighting design. Using neon, direct, mood and sectional lighting, he emphasises the structural qualities of the set and reinforces the modern setting. With such a text-focussed piece, the emphasis rightly needs to be on clear communication of the dialogue but the supporting soundscape skilfully augments the incongruous atmosphere.

Esther Richardson’s multilayered direction feels classical, in the grandest sense: poetic interludes, monologues directed to the audience, and sweeping action contrasted with quiet moments of intimacy. A complex and epic production for a story addressing some of the biggest challenges to today’s society. The simple, but revolutionary idea that Blackman’s story presents is this: put yourself in the other person’s shoes, and see how the world looks from that perspective. We may like to think we are true ‘egalitarians’, but how many assumptions lie behind our well-meaning, privileged position and what happens when those positions are reversed? It’s a concept which is more relevant than ever and one which today’s younger generations need to fully engage with. Sephy, her own political ideology forming, steps from one shifting panel to another, finding her way, trusting to instinct that she will find solid ground beneath her ideas. In a society controlled by the Crosses, it’s their game and their rules, where gratitude is expected for small concessions. The media, the law, education, all are in the power of the Crosses. And power only functions if there is someone or something to be oppressed. 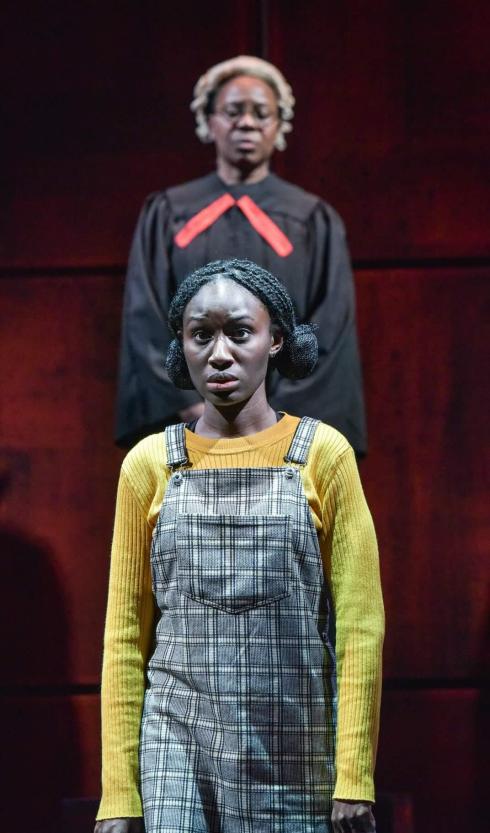 In the novel, the Crosses have the nickname of ‘daggers’ – an insult, but one that supports their position of power – a dynamic symbol, an assumption of superiority. The Noughts are labelled ‘blankers’ – an empty circle, enclosed, simplistic, reinforcing the idea they are nothing, empty. Both are playing a game which is futile: noughts and crosses, or tic tac toe, is generally a game which leads to a draw. But a draw is not the same as equality, it is a futile striving against one another.

This is the first production in a 3 year funded programme of a producing consortium including Pilot Theatre, Derby Theatre, Mercury Theatre, Colchester, and Belgrade Theatre, Coventry and York Theatre Royal. The programme is aimed specifically at finding new ways of engaging younger audiences through touring productions, enabling them to discover and examine ideas relevant to today’s world. Noughts & Crosses provides an explosive springboard for these aims, and will undoubtedly generate momentum as it tours the country following it’s opening in Derby.

Noughts and Crosses run at Derby Theatre until 16th Feb 2019