Eastmidlandstheatre.com offer their heartiest congratulations to Nottingham Playhouse on winning the Best Regional Theatre award in The Stage Awards announced today.  It has been a year of change and renewal for the theatre under the guidance of new Artistic Director Adam Penford and Chief Executive Stephanie Sirr, and to have achieved this recognition in such a short time period is remarkable. The other theatres nominated in the same category were Royal Exchange Theatre, Manchester and Theatr Clwyd, Mold, showing the very high level of competition the Playhouse was up against.

Penford’s approach has been ambitious in both breadth and reach.  Aiming to put Nottingham Playhouse ‘back on the map’, his dynamic programming has attracted new audiences and brought it to the attention of a national and international audience.  The crowning glory of the year was The Madness of George III, starring Mark Gatiss, a widely admired and strikingly memorable production which was also broadcast live to cinemas, a first for a regional theatre.  But one swallow does not a season make and there was pith and vigour in the rest of the programme too. 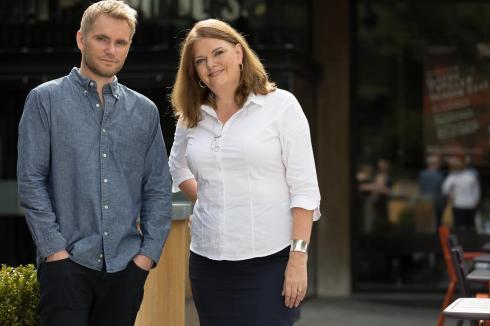 Penford programmed ‘Shebeen’, set in the Nottingham race riots of 1958 and written by local author Mufaro Makubika, as part of his artist development programme.  Sensitively directed by Matthew Xia, it was an exciting and moving expose of the times.  Next up was Wonderland, written by another local playwright Beth Steel, about the miner’s strike of 1980s.  So successful was this production that it returns this year.  Then there was the haunting Kindertransport, by another female writer Diane Samuels: Our Country’s Good, a co-production with Ramps on the Moon company, performed by a mix of disabled and non-disabled actors: and Sweet Charity, the first musical to grace the Playhouse stage in many years. The diversity and dynamism of the programming, the quality of the casts and production teams, the talent of the behind the scenes teams such as the paint shop, wardrobe etc all contribute to an outstanding year and this well-deserved award.