Psyche. This is the word from which ‘psychology’, ‘psychiatrists’, ‘psychotic’, etc., are derived. It originates in Greek and means ‘soul’. The Lace Market Theatre cast and creatives of Peter Shaffer’s Equus, certainly put their hearts and souls into this powerful drama of psychotic behaviour and the attempts of child psychiatrist, Martin Dysart (Fraser Wanless), to help heal the mental wounds of 17 year old Alan Strang (Jak Truswell). The crime? Strang has savagely blinded six horses with a metal spike in one night.

The original National Theatre production was staged in 1973 to much critical acclaim. The play text remains unchanged whilst methods of psychiatry have very likely evolved well beyond the methods used by Dr Dysart and his staff to clarify the motivation behind this atrocious act of seemingly mindless violence. That said, the core message of the play is about worship of gods true, gods mythical and inner demons and how they haunt, not only the violated psyche of the young perpetrator Alan Strang, but also the disturbed mind of the overworked child psychiatrist, Martin Dysart. 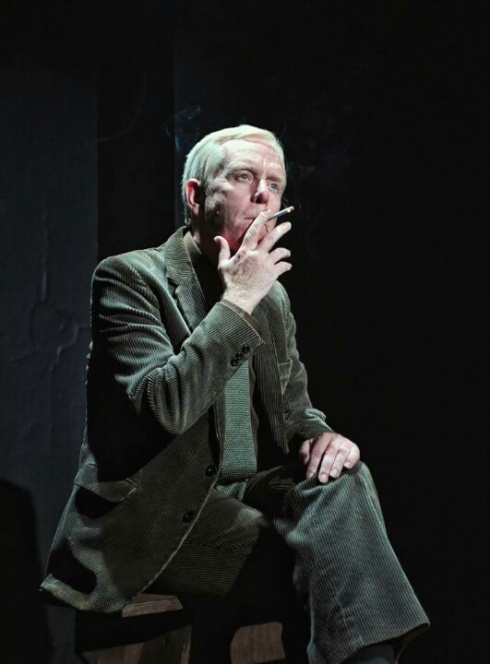 In Dysart’s case much personal consideration and classical reference is given over to the world of the ancient Greeks. He is haunted by the horse god Equus who stares at him unblinkingly from the dark depths of his mythical cave. His nightmares feature horrifically compelling ritual slaughter of over 500 children in Homeric Greece. These are coupled with his fears of being discovered taking part, as he hides behind his ever slipping mask. The centaurs trampling the red soil plains of Argos are but a mythological fiction to Dysart. Meanwhile, he claims the deranged boy he trying to help has attempted to actually become a centaur in a Hampshire field. His response is the deep jealousy of one who has imagined but never experienced wild abandoned passion. Staring eyes become a constant metaphor in this psychologically most gripping drama.

In Alan Strang we are dramatically obliged to deal with his initial non-communication; with his ‘chinkle chankle’ hide bound, sexually driven obsession with horses and the Latin name Equus; with his rejection of formal equitation and complex renunciation of Christian religiosity forced upon him by his overbearingly dogmatic mother, Dora Strang. As with Dysart, the symbolic leitmotif of ‘I see you. Always. Everywhere. Forever’  carried out through accusing eyes plague and torment this young man to the point of a mental breakdown. 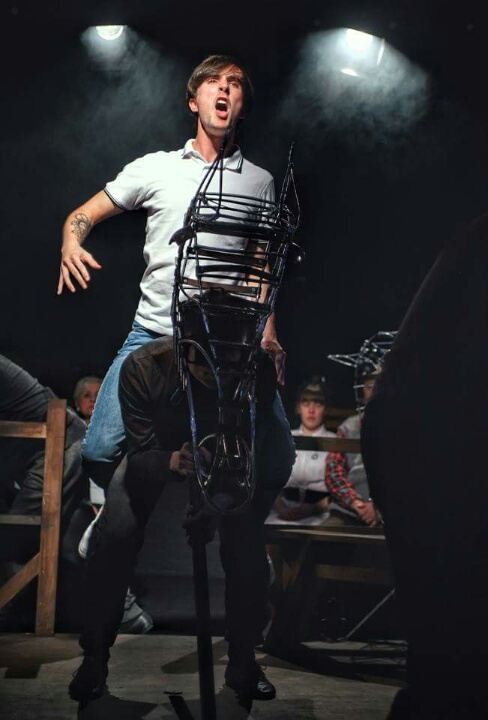 This Lace Market Theatre production is exceptionally well executed. Mark James’ solid set works on many levels – principally as the key location as the Winchester stables and as a metaphorical point of judgement like in a court with actors placed behind watching the action unfold. Audience members are also seated at the back of the stage giving the piece an ‘in the round’ immersive theatre feel. The actors wearing the giant metallic horse heads give the piece its equine majesty as well as providing crucial dramatic tension in pivotal scenes. Mark James also plays Horseman and Nugget the horse. Movement director Abby Wells and production director Chris Sims should be commended on their professional direction. Together they bring this work of theatrical art stunningly to life. The excellent sound and lighting atmospherics by Jack Harris and David Billen are equally commendable. 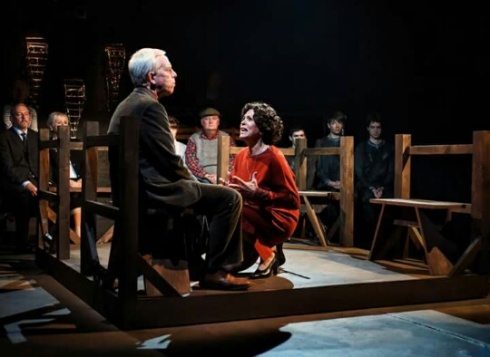 As Martin Dysart, Fraser Wanless gives us a totally believable and masterful performance. Wanless’ acting style as Dysart is not one of theatrical histrionics but an assuredly measured examination of a man whose own need for personal and professional accountability is on a par with that of needing to cure the mentally ill children. Wanless carefully scales up his performance until the final moments of the play where essentiality locks horns with irreversibility.

Jak Trussell gives us his character- the disturbed youngster Alan Strang – one teasing and sullen glance at a time. His stare is essentially mesmeric. Blocking out any normal form of communication with Dysart his responses to simple questions are in the form of 1960s food product jingles.

The Lace Market Theatre casting team have pulled together a really solid cast for Equus and the audience are rewarded with top class acting from Sarah Taylor and Nik Hedges as parents Dora and Frank Strang. In these two – parental values conflict as the mother’s obsessive bible referencing Christianity clashes with old fashioned bombast and archaic language from the father. 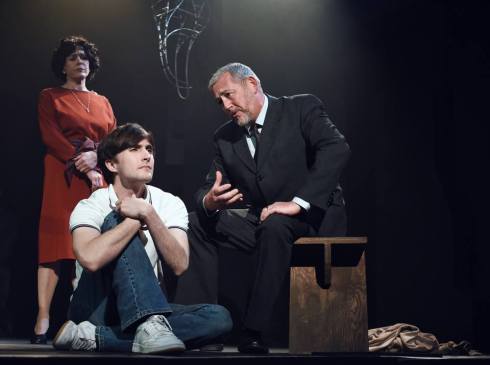 Carol Parkinson exudes confidence as magistrate Hesther Salomon and is the calming influence to Dysart’s occasional neurotic outbursts as well as persuasive in admitting the seventeen year old Strang to Dysart’s reluctant care. 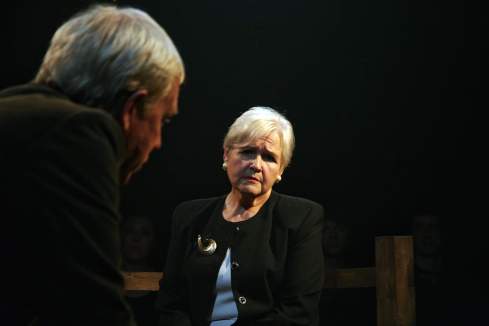 Dani Wain makes a very credible and caring nurse. She is spot on perfect as the starchy no nonsense provider of medical and social care for Alan Strang.

Down at the Winchester stables we temporarily meet stable owner Harry Dalton (Alistair Hudson) and stable hand Jill Mason (Joanna Hoyes). Hudson demonstrates the devastation and shock in a brief but solidly grounded performance. His character is super recognisable as  the gruff yet kindly soul that Dalton is. 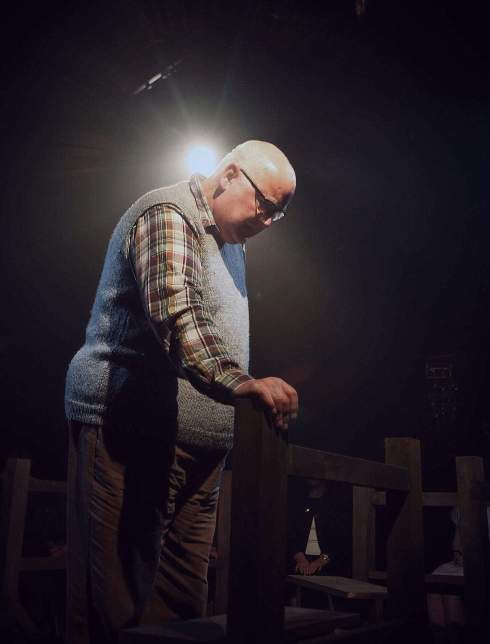 Hoyes is very believable as the unwitting activator and innocently sexual instrument of Alan Strang’s full on moment of berserk fury and horse blinding. Her confident portrayal is very typical of many a horse loving young woman from a middle class family who is more than content to spend hours and hours in the company of horses and loves every minute of equine grooming and riding.

The horses are played by Johnathan Cleaver, Matthew Finkel, Neil Ledward, Nathan Sharpe and Arnd Korn. These horses, complete with head masks hired from the National Theatre itself, are a wonder to see and their tight and stylised choreography give this superb production the icing on the spectacular cake.

Post Scriptum: So if you want a slice of this terrific drama at The Lace Market Theatre we highly recommend that you book asap as we predict a sell out. Equus runs (and gallops) until Saturday 13th October including  a Saturday matinee.