Skip to content
Posted on April 25, 2018 by philiplowe Posted in Illusion and MagicTagged Derren Brown, illusionist

Nottingham Theatre Royal  is jam packed tonight and expectation hangs in the air as we await the on stage arrival of Britain’s most popular stage and television illusionist – Derren Brown. He is in town until Saturday 28 April with his show The Best of Derren Brown – Underground. 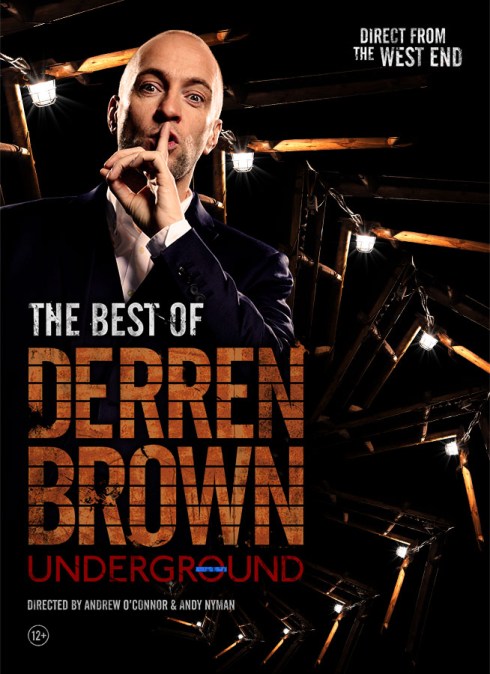 On a quick scan around the audience he clearly has a legion of fans from teens, one sixty plus theatre reviewer, middle aged folk and pensioners. If anyone could have brought in a family pet as well they would have done. Well maybe not snakes or poorly behaved drunks from Hull.

Derren Brown is hypnotic in his seeming laid back style that belies years of professional illusionist practice par excellence. His wit and presentations that thoroughly involve his audience members are pure magic right up to the last second. At the start Brown tantalises the audience with what’s to come and offers up a portion of his life story and the idea that everything we see and do is stories. Then he asks us not to repeat information about any of the tricks we are about to witness on stage tonight. So, Mr Brown you are asking a theatre reviewer not to repeat or tell about what happens on stage? Hmm, well here goes. And when this reviewer taps his own keyboard three times he will stop and wake up. This reviewer will be wide awake and remember everything. We hope.

All of the illusions/tricks are astoundingly well executed. The audience are in thrall all the way through and Brown’s show provides plenty to amuse as well as captivate our minds. His style is a mix of gentle and yet subtly controlling. The audience’s safety is paramount all the way through. Frisbees are involved quite a lot. As is a banana. The banana is not thrown. We laugh and  we gasp in astonishment many times. We leave the interval super keen to experience more. Some people have a compulsion to stand up during the show and at the end nobody seems to want to leave their seats and go home. There is tumultuous applause and a theatre full of very happy faces. The show is directed by Andrew O’Connor and Andy Nyman. It is a superb evening’s entertainment in the hands and heart of a supremely good illusionist that goes by the ordinary sounding name of Derren Brown. Book tickets before they sell out.