Skip to content
Posted on March 29, 2018 by philiplowe Posted in comedyTagged Birds on the Wing, Jakobus Theater, Peter Yeldham, The Lace Market Theatre

Birds On The Wing, a comedy farce by Australian writer Peter Yeldham (born 1927), was written in 1970. In that decade it had a long and record season in Berlin as Auf und Davon and also an extensive run in Paris. It became Europe’s top grossing play in 1972. It was also adapted into a television series by Yeldham and starred one of Britain’s favourite light comedy actors, Richard Briers.

Peter Yeldham’s back catalogue is hugely impressive with writing successes in screenplays, for TV shows, plays and novels and in Birds On The Wing we meet him at one of the pinnacles of his writing career and also as he returns to his homeland after twenty years of living in the UK and soaking up our popular entertainment culture. This is evident in his comedy Birds On The Wing as it flits and flirts and amuses with its cultural references and pokes light fun at various nationalities. 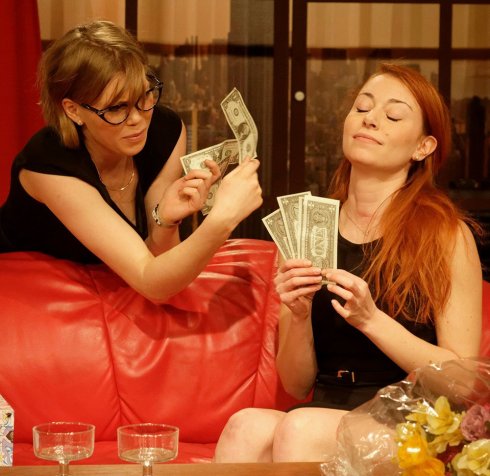 The tour set is a pared down version of the original Jakobus Theater set (seen here in photos) and has been re-created by the membership of the Lace Market Theatre and technically run by participants from both groups.

To begin, Markus Künstler gives us a charmingly informative and comical introduction to the show in English. The pace of this highly polished production of Auf und Davon is fast and funny as we watch, and hear about, the delightful antics of the attractive Elizabeth (Magdelena Maier) and Josephine (Caroline Scheringer) as they successfully scam large amounts of money out of rich men.

In doing so they travel all around the world and stay in hotel rooms that, remarkably, all look exactly the same excepting a change of cityscape vista through the French windows and a change of the picture on the sideboard. Maier and Scheringer both brim with energy and naughty charm throughout and are their wicked best in the seduction scenes. They think they are about to scam Charlie (Carsten Thein), a young and handsome bank manager, but soon find they have met their match! Thein brings his own charisma and comedy talents to the stage and is on top form as the chameleon like Charlie. One of the comedy highlights is his crazy interpretation of the wheel chair bound Swiss speaking man out to swindle Alexander Voß’s Sir George Smith. All of the actors timing is comedy perfection. 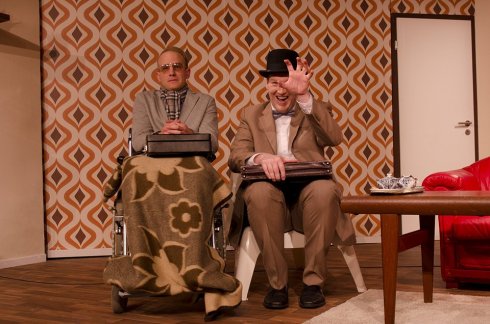 Alexander Voß and Ann – Sophie von Zitzewitz both excel in their comedic situations and whilst the brief interpretation of the Japanese characters may not be everyone’s idea of PC it is faithful to the playing style of the 1960s and 1970s.

The comedy takes us from city hotel to city hotel all over the world and the changes are slickly done in the dark with several witty voice overs from Markus Künstler as an invisible flight captain, The whole playing of the comedy is beautifully played out with no inhibitions from all of the fabulous cast. Being a farce some of the situations are ludicrous but the cast carry on as if the whole world acted in this frantic bed hopping way and they even calmly deal with an unexpected situation where a door handle falls of the main door. 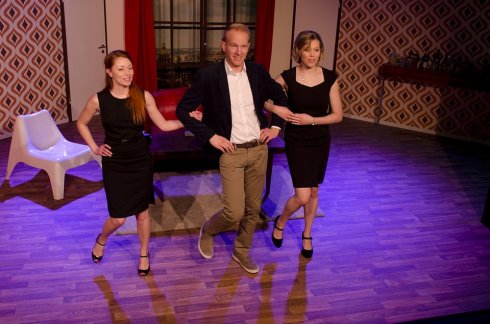 Additional to Peter Yeldham’s script the company have added in several songs from the period that are well sung (in English and Italian) and carry us delightfully through the action of the German language version and give the non German speaking audience extra enjoyment. The whole evening is an utter delight.