Vulva La Revolution by theatre group Major Labia is back for one night only at the Nottingham Playhouse after a sell-out success as part of the Playground Festival in October 2017. Irreverent, clever and laugh out loud funny, it’s like a feminist version of The Fast Show, brought bang up to date.

There are gags a plenty in the show but the detailed characterisations, by the hugely talented female protagonists, enable story-telling, which is so much more engaging. From Maid Marion and Ada Lovelace to Rebecca Adlington, we are introduced to the some of the most celebrated women of Notts throughout the ages. Maid Marion must deal with the fawning Robin and the lecherous Sheriff but once she casts off her restrictive skirts and mounts her steed, nothing can stop her. Whether anyone beyond the county borders can decipher the dialect is another question. However, the themes of patriarchy, racism, and sexual misinformation are universal and here they are all treated with the same derision. 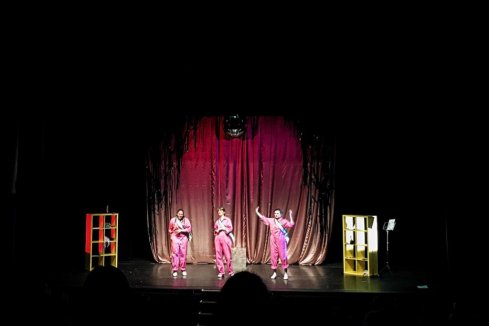 Phoebe Frances Brown delivers a slew of Notts women (and a few men) with precision, confidence and a Notts accent that must be native. Gemma Caseley-Kirk’s physicality has her transform from a moustachioed doddering male company boss into Jayne Torvill, where she delivers a Bolero ice-dance performance to be proud of. Narisha Lawson completes the energetic trio and her satirical Mary Berry rap proves a roaring success. Siobhan Cannon-Brownlie, the Founder and Artistic Director, captures the unique qualities of each and gives the show shape, flow, movement and pace. Interludes of thumping music keeping the energy high throughout. All of the women are graduates and associates of the BAFTA award-winning Television Workshop in Nottingham.

The designer Eleanor Field has embraced the larger stage and created a huge version of the original set. Essentially, this is a giant vulva, complete with shiny pubic hair and a glitter ball suspended like a glistening button. And there are actual curtains, delivering one character after another onto the stage. A wig here, a bonnet there and with a change of posture, another new character emerges. It’s funny, it’s fast, it’s clever stuff and delivered with passion.

One sketch shows a woman hitch-hiking to London to find opportunity in the streets paved with gold, only to return, having realised it’s just – too expensive. The groan from the near capacity audience was audible. Clearly that’s a journey many a local has made, with the very same result! But now there’s no need to go to that there London, Nottinghamshire is growing its own talent and it can be seen right on us own doorstep.