“I think people underestimate the value of dance schools and how important they are to the social wellbeing of towns. I wanted to run my dance studio just like Frank ran his.” Len Goodman – Dance & TV personality, BBC Strictly Come Dancing 2004 – 2016 and a judge during the Dancing Club’s heyday

The Dancing Club is a new play for community owned spaces, school and village halls, libraries, arts centres and theatres. Produced by Pippa Frith and written and directed by Caroline Jester, The Dancing Club is based around the remarkable and inspirational true story of Kidderminster legends Frank and Wynn Freeman and their selfless drive to get a town dancing. 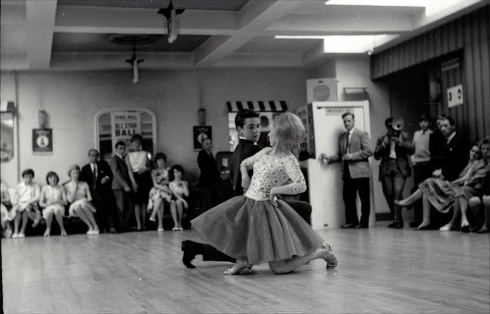 The Dancing Club receives its world premiere tour in 2018, opening on Wednesday 28 February in Kidderminster – the home town of Frank and Wynn’s original Dancing Club – and concludes in Cumbria on Sunday 25 March.

After World War II, Frank moved back to his hometown Kidderminster and with Wynn’s support they realised a life-long ambition and opened a dance school in 1948. Through the gentle traditions of ballroom dancing to the explosion of rock and roll, northern soul and disco, Frank and Wynn continued to inspire Kidderminster to move for over six decades. In their Dancing Club people learned the waltz one night and watched live music by Marc Bolan, Captain Beefheart and Led Zepplin the next. Robert Plant was a good friend of the community champions.

Whether famous musicians from sunny California or young Kidderminster mums bringing their children in for dance lessons, Frank and Wynn treated them all the same. Everyone in the town knew and respected the couple and when Frank died, in his beloved ballroom in 1991, the town came out in procession for his funeral.

Caroline Jester, author and director of The Dancing Club and a former dance pupil of Frank and Wynn’s, interviewed over 100 Kidderminster residents to develop the show and said: “Frank Freeman’s dancing club didn’t just teach me disco dancing. It gave me self-confidence to do what I wanted to do. But it wasn’t just me that he made feel special as I discovered interviewing people aged 25 to 90 for The Dancing Club.” Heartfelt and fascinating memories of Frank and Wynn unfolded and confirmed their Dancing Club was a safe haven for many members of the town’s community. Young or old, creativity was unlocked and friends made.

Original music for The Dancing Club is by composer Jon Bates and the performance will include a special recording from the Kidderminster Male Choir.

Choreography is by Steve Elias who got three Yorkshire towns moving in the 2017 BBC2 series Our Dancing Town.

A cast of four – Mark Jardine as Frank, Ali Belbin as Wynn and Laurence Saunders and Emma Clayton play a range of characters – portray accounts of opportunity and trust as the dance teachers’ life-long commitment to the Worcestershire town is brought to the stage.

Presented in the round, similar to a traditional ballroom dance club setting, themes of celebration and nostalgia weave through Jester’s The Dancing Club. Culminating in an invitation for the audience to join the cast on stage to learn a dance, characters Frank and Wynn will once again highlight the importance of community spirit and get more towns moving in The Dancing Club.

Writer / Director – Caroline Jester is a writer, dramaturg and director. She was Dramaturg and Literary Manager at the Birmingham Repertory Theatre for 12 years and is a Fellow of the Institute of Creative and Critical Writing at Birmingham City University. She is the co-author of Playwriting Across the Curriculum (Routledge), Fifty Playwrights on their Craft (Bloomsbury), Dramatic Writing Masterclasses (Oberon), The Student Guide to Playwriting (Oberon) and editor of Europa (Bloomsbury). As playwright work includes The Wedding (Birmingham Rep), Don’t Forget the lights (Birmingham Rep) and Weaving the Town (Museum of Carpet). Directing includes a sell-out national tour of David Hare’s The Blue Room, ten festivals of new work for the Birmingham Repertory Theatre and new plays for Menagerie Theatre Company. She is the originator of REPwrite, an interactive playwriting zone and designs playwriting programmes internationally including Italy, Croatia, the US, Poland, Germany and Singapore. www.carolinejester.com

Choreographer – Steve Elias was presenter and lead artist in BBC2 documentary Our Dancing Town – ‘[he has an] exuberance that seems capable of awakening Billy Elliot style stirrings in almost anyone’ The Guardian. Steve was born in Carmarthen in Wales the youngest son in a family of builders, carpenters, plumbers and electricians a career in the performing arts was not an obvious one for Steve but at sixteen Steve was accepted into the National Youth Theatre of Wales. After training at Middlesex Polytechnic Steve has had a huge career as an actor, dancer, director and a choreographer spanning 25 years. West End credits include Mr Braithwaite in the original company of Billy Elliot, Nicely Nicely Johnson in Guys and Dolls, George in My Fair Lady and Samuel in The Pirates of Penzance. He is also known to children as Mr Whoops in the BAFTA nominated BBC’s Grandpa in my Pocket. Steve has also found time to become Artistic Director of Carmarthen Youth Opera so his career has come full circle.

Composer – Jon Bates has composed and scored music extensively for theatre, dance, film and television including a ‘short’ that won a BAFTA award in the early 1990’s ‘Release Me’ – script by Simon Beaufoy, Directed by Frances Lea, screened at Bafta, on BBC2 and won awards at several international festivals. He has had a long career in music that started as a teenage musician working on many tours with Tamla Motown and Stax Record artists whilst having songs published by EMI. He then worked in Scandinavia as a freelance session arranger and player, simultaneously having songs published whilst also branching out into contemporary dance with a commissioned electronic score. Work for theatre, radio and film soon followed. He has written TV theme music (Central Weekend, You’d Better Believe It and others), worked on other short films (Barbarians At The Gate, 2010), numerous theatre shows (incidental music), original pantomime scores, and recently, a commissioned full-length modern dance score for Ignite Dance Company performed live on violin and piano. As well as being a very active live performer, arranger and music director, Jon has also had several music books published by Oxford University Press and Kevin Mayhew. He has also written and articles for numerous music technology magazines for over 20 years and is currently a design consultant for music software. He has also worked at Kidderminster College for many years, running the music technology department and being music director for numerous theatre shows. He is also a frequent guest lecturer at Wolverhampton University.

Producer – Pippa Frith is an award winning Independent Producer based in Birmingham. She works with artists to create art that aims to surprise and delight audiences nationally and internationally. She is passionate about working in the regions to create new work of high quality, showcase new voices and grow new audiences. In 2014 she won The Mark Marvin / Peter Brook Award for her work with Birmingham REP. She is currently Producer for Fierce Festival. She is the long-term producer for celebrated solo artist Francesca Millican-Slater (Me, Myself and Miss Gibbs, The Forensics of a Flat, My Dearest Girls, GOLD, Stories to Tell in the Middle of the Night). She has an ongoing relationship with Stephanie Ridings (The Road to Huntsville, Unknown Male). She was Co-Producer of Our Fathers (Babakas, commissioned by Warwick Arts Centre, mac Birmingham and China Plate), supporting the work through two national tours, a number of international dates and a critically acclaimed Edinburgh Festival Fringe run (2013). She is also Co-Director of well-loved work-in-progress platform PILOT Nights.

She is a visiting lecturer at University of Birmingham and Birmingham School of Acting. Before developing her producing portfolio Pippa worked as Project Manager for Women & Theatre, as a Programmer at the Drum Arts Centre; was Project Manager of The Decibel Performing Arts Showcase 2007 and Fierce Earth. www.pippafrith.co.uk

One thought on “The Dancing Club – new play promotion.”