Kander & Ebb’s musical Cabaret with book by Joe Masteroff is based on John Van Druten’s 1951 play I Am A Camera based on Christopher Isherwood’s novel Goodbye To Berlin. The popular musical has been produced and performed all over the world. 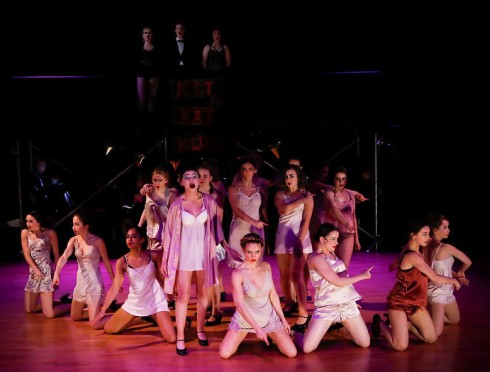 Using the 1966 version of this biting musical that exposes the seedy underbelly of cabaret life in Berlin and the rise of the Nazi party in early 1930s Germany, the Nottingham Bilborough College Arts 6th Form students themselves have created a stripped back version of the show that works exceptionally well. 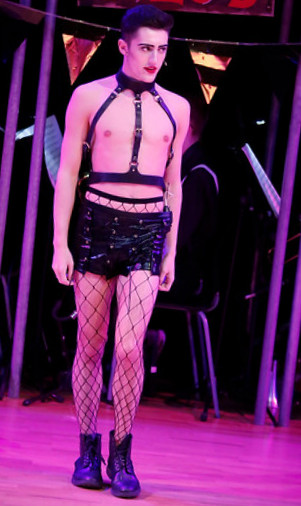 Famous for its opening number ‘Willkommen’ plus ‘Don’t Tell Mama’, ‘Perfectly Marvellous’, ‘Two Ladies’, ‘It Couldn’t Please Me More’, ‘Cabaret’ and ‘Tomorrow Belongs To Me’ the piece is a challenge for any company to bring across the louche and dangerous world of the 1930s socio-political cabaret underworld and the frightening advent of the Nazi Party. 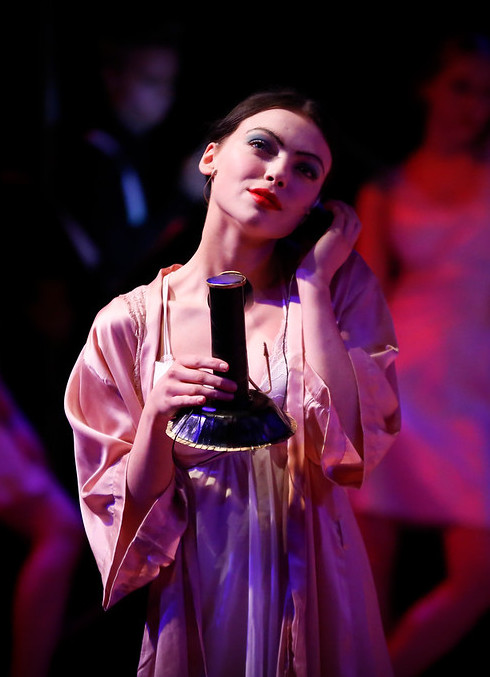 Running 6-8th December at the Gilly Archer Theatre Bilborough College, Cabaret is a thrilling success for these talented students.

Produced by Sharon Macinnes and directed by student Sophie Boettge with musical direction from co-musical directors Dan Gribben and Nathan Holroyd, Cabaret impresses with its professionalism and slickness. The stylish choreography for its many song and dance numbers is a credit to choreographer Sam Holden who also plays Emcee.

The Kit Kat Club girls are a super confident dance unit that also act as casual observers to the action. At times their sexual disporting and cavorting and choice of attire reminds one of another Kander & Ebb musical – Chicago.

As Emcee, Holden captures the louche depravity of his character well both in song, dance and responses to how the story evolves from bawdy Berlin cabaret scene to the seeping anti-Semitic mentality of the Nazi regime indoctrinating the public mind and attitudes of the German populace.

Alice Lindley completely nails the gauche fragility of the night club singer Sally Bowles with her clipped English vowels and needy, yet attractive, personality. Her delivery of all Bowles’ songs is pure professionalism. Her relationship with Clifford Bradshaw (Alfie Sanders) is very believable and Sanders American accent and strong singing voice give the character much credibility on stage. 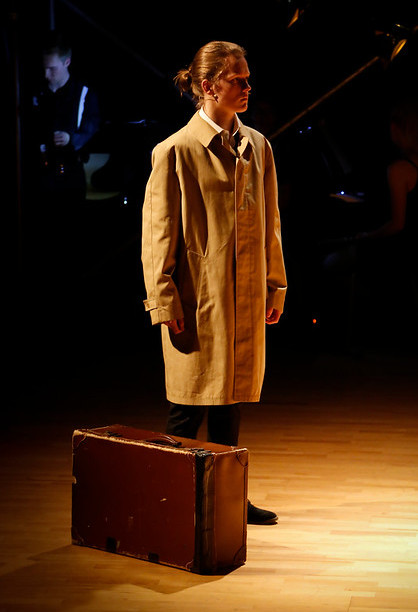 We have a cast of very strong student players in this ‘in the round’ studio production. Despite the lack of set the players ‘show us’ their surroundings through their placement on stage and through our mutual believability in their confident conveyance of the text and songs. Joe Spoors makes a very credible German Ernst Ludwig, friendly at first but with dodgy money laundering deals going on in the background and changing to hardened inhuman follower of the Nazis later in the second half.

Molly Hewitt – Richards almost steals the show as Berliner landlady Fräulein Schneider on the cusp of love. Hewitt – Richards’ singing is powerful and heart-breaking at times. This is an actress really on top of her character.

Countering Fräulein Schneider in the love stakes is a wonderfully gentle and sympathetic Archie Stephens as Herr Schultz. Stephens clutches the whole audience to his aching  heart and won’t let go. His Jewish character is never cloying just very human.

You forget that all of these older characters are being played by much younger artists.

As Fräulein Kost, the tart with no heart, Imogen Birket stands out for her sterling performance and for her stage craft utilising, so well, the wide empty playing space. Birket captivates us in her tricksy seductions with her ‘cousins’ from Hamburg.

As student productions go, Bilborough College’s Cabaret, including a very accomplished live band, is superb. One could only imagine what it would be like with a full set and more atmospheric lighting.