Nottingham Playhouse’s 2017 Panto Cinderella Nottingham City Transports us to a wonderful world of magic, glitz, humour and fairy-tale romance. Writer and Director Kenneth Alan Taylor has once again come up with a glittering, joyous and reasons to be very cheerful pantomime with faces familiar and new in the cast. It is a spectacular riot of colour and jollity with one of the best, visually magical, Cinderella’s coach transformations to grace any pantomime stage. Oh yes it is!

Panto Dame favourite John Elkington is a returning delight direct from his Cherry Orchard success where he was a man who held the purse strings. Now he is a ‘lady’ (Dame Bella) kitted out with a purse and matching handbag. Dressed up in a variety of colourful and wacky costumes Dame Bella strings us along with many a gag and brilliant ad lib along the merry route to Prince Charming’s Castle. Darren Southworth is a hoot as his equally bonkers dame sidekick Dame Donna. Their broken down car scene is a classic, as is their ad libbing as the ‘car’  accidently collides with a bit of scenery. 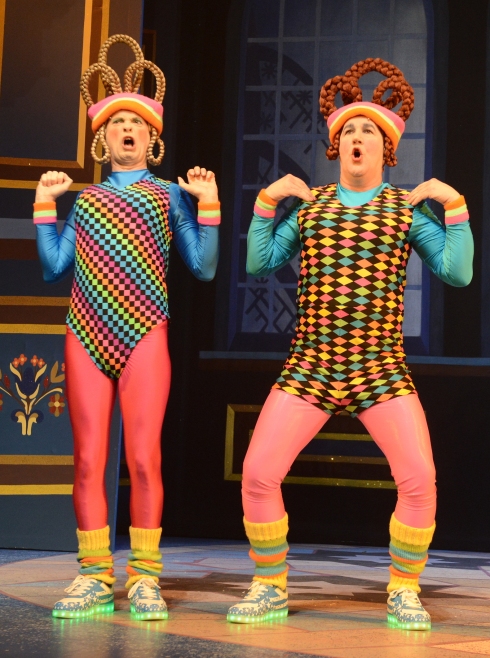 Nottingham Playhouse panto fave over the years is Rebecca Little who this year as gone to the dark side as bad girl Dowager Duchess Devilla. Little revels in her naughtiness and the audience love her. Tim Frater is a very lovable athletic Buttons whose energy and bright smile lights up the stage and beyond each time his character is needed. He declares he is in love with Cinderella but will his love bursting heart get the girl?

We have some new boys and girls on the Nottingham Playhouse stage in Cinderella. Oh yes we do! These are Cinders herself – beautifully and naturally played by Kelly Agredo; and a genuinely charming Prince Charming by James Nicolson.  We enjoy an affable, very well sung, (yes that’s well sung – you naughty boys and girls!) Dandini played by Adam Pettigrew. Claire Storey is a total delight as the Fairy Godmother.

The so called Red and Blue teams sing and dance alternate performances as various woodland animals, soldiers and townsfolk. Regular Nottingham Playhouse panto goers might well enquire if the very popular and hilarious ‘funny bunny’ dancing bunnies are going to re-appear in this year’s show. Well ladies and gentlemen, boys and girls, if you hop along and buck your tickets you will find out!

John Morton is once again the fabulous Musical Director and Ian Maclean, John Porter and John Watterson make up the splendid band. The terrific set and designs are created by Tim Meacock; the lighting and sound are from Jason Taylor and Adam P McCready for Poetical Machines Ltd. Choreographer Adele Parry gives the splendid cast plenty to dance about and keeps us tapping our own toes in panto-tastic unison. 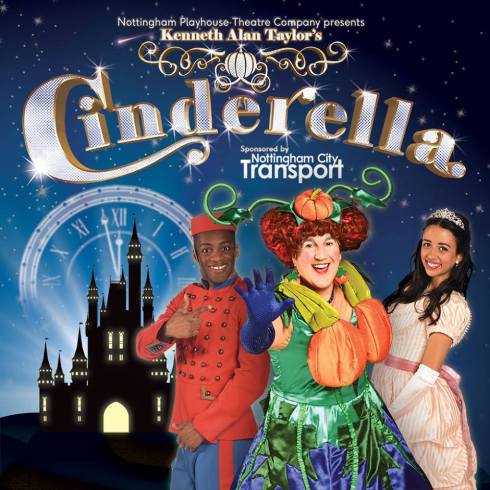 From the village to the winter woodlands, via Hardup Hall, the Grand Palace and the grand finale, the audience enjoy and laugh along to this terrific production of Cinderella. It is a show full of daftness, infectious song and dance routines, some wicked ‘join in fun’ and true romance! 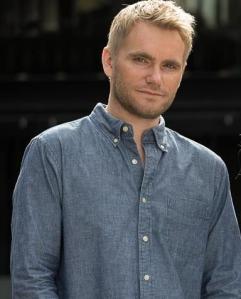 One little fellow, on this packed press night, had his dearest wish granted as he was brought up onto the stage by Dame Bella (John Elkington). Ahhhh!

The bashful little chap got his wishes granted – to join the dame on stage and one day to run a prestigious East Midlands’ theatre! What an ambitious and lucky little chap! Oh, bless him, you should see how he blushed and squirmed and he told the cheeky Dame his full name – the newly appointed artistic director Adam Penford. What a mouthful! Well, boys and girls, if Adam finds himself at a loose end in his new job there are plenty of puzzles and games to play in the lush and shiny Nottingham Playhouse Cinderella programme. Enjoy Adam.